Neal Stephenson’s sci-fi novel Snow Crash borrows from Jean Raspail’s The Camp of the Saints the concept of a seaborne invasion of refugees that Stephenson calls the Raft:

“When [the Raft] gets to California, it will enter a new phase of its life cycle. It will shed much of its sprawling improvised bulk as a few hundred thousand Refus cut themselves loose and paddle to shore. The only Refus who make it that far are, by definition, the ones who were agile enough to make it out to the Raft in the first place, resourceful enough to survive the agonizingly slow passage through arctic waters, and tough enough not to get killed by any of the other Refus. Nice guys, all of them. Just the kind of people you’d like to have showing up on your private beach in groups of a few thousand.” [p. 272]

Tom Friedman writes in the NYT:

Agadez, NIGER — It’s Monday and that means it’s moving day in Agadez, the northern Niger desert crossroad that is the main launching pad for migrants out of West Africa. Fleeing devastated agriculture, overpopulation and unemployment, migrants from a dozen countries gather here in caravans every Monday night and make a mad dash through the Sahara to Libya, hoping to eventually hop across the Mediterranean to Europe.

This caravan’s assembly is quite a scene to witness. Although it is evening, it’s still 105 degrees, and there is little more than a crescent moon to illuminate the night. Then, all of a sudden, the desert comes alive.

Using the WhatsApp messaging service on their cellphones, the local smugglers, who are tied in with networks of traffickers extending across West Africa, start coordinating the surreptitious loading of migrants from safe houses and basements across the city. They’ve been gathering all week from Senegal, Sierra Leone, Nigeria, Ivory Coast, Liberia, Chad, Guinea, Cameroon, Mali and other towns in Niger.

With 15 to 20 men — no women — crammed together into the back of each Toyota pickup, their arms and legs spilling over the sides, the vehicles pop out of alleyways and follow scout cars that have zoomed ahead to make sure there are no pesky police officers or border guards lurking who have not been paid off.

It’s like watching a symphony, but you have no idea where the conductor is. Eventually, they all converge at a gathering point north of the city, forming a giant caravan of 100 to 200 vehicles — the strength in numbers needed to ward off deserts bandits.

… So, as one smuggler explains to me, the cars and buses of the tourist industry have now been repurposed into a migration industry. There are now wildcat recruiters, linked to smugglers, all across West Africa who appeal to the mothers of boys to put up the $400 to $500 to send them to seek out jobs in Libya or Europe. Few make it, but others keep coming.

I am standing at the Agadez highway control station watching this parade. As the Toyotas whisk by me, kicking up dust, they paint the desert road with stunning moonlit silhouettes of young men, silently standing in the back of each vehicle. The thought that their Promised Land is war-ravaged Libya tells you how desperate are the conditions they’re leaving. Between 9,000 and 10,000 men make this journey every month. …

What’s crazy is that as you go north of here, closer to the Libya border, to Dirkou, you run into streams of migrants coming back from Libya, which they found ungoverned, abusive and lacking in any kind of decent work. One of them, Mati Almaniq, from Niger, tells me he had left his three wives and 17 children back in his village to search for work in Libya or Europe and returned deeply disillusioned. In Libya, say migrants, you can get beaten at any moment — or arbitrarily arrested and have the police use your cellphone to call your family in Niger and demand a ransom for your release.

Just as Syria’s revolution was set off in part by the worst four-year drought in the country’s modern history — plus overpopulation, climate stresses and the Internet — the same is true of this African migration wave.

… Chaifou explains that West Africa has experienced two decades of on-again-off-again drought. … Meanwhile, the population explodes — mothers in Niger average seven children — as parents continue to have lots of kids for social security, and each year more fertile land gets eaten by desertification. “We now lose 100,000 hectares of arable land every year to desertification,” says Chaifou. “And we lose between 60,000 and 80,000 hectares of forest every year.” …

John Updike’s Sahel novel  The Coup  was set during the drought that peaked in 1973: the dictator of Kush chops off the head of the ex-king to end the drought. But it’s eventually mentioned that the drought is driven by population increase: there are more herdsmen so there are more goats who eat the baby trees so there is more desertification as the sun beats down directly on the soil.

Says the U.N.’s Barbut, “Desertification acts as the trigger, and climate change acts as an amplifier of the political challenges we are witnessing today: economic migrants, interethnic conflicts and extremism.” She shows me three maps of Africa with an oblong outline around a bunch of dots clustered in the middle of the continent. Map No. 1: the most vulnerable regions of desertification in Africa in 2008. Map No. 2: conflicts and food riots in Africa 2007-2008. Map No. 3: terrorist attacks in Africa in 2012.

The European Union recently struck a deal with Turkey to vastly increase E.U. aid to Ankara for dealing with refugees and migrants who have reached Turkey, in return for Turkey restricting their flow into Europe.

“If we would invest a fraction of that amount helping African nations combat deforestation, improve health and education and sustain small-scale farming, which is the livelihood of 80 percent of the people in Africa, so people here could stay on the land,” says Barbut, “it would be so much better for them and for the planet.”

Everyone wants to build walls these days, she notes, but the wall we need most is a “green wall” of reforestation that would hold back the desert and stretch from Mali in the west to Ethiopia in the east. “It’s an idea that the Africans themselves have come up with,” she adds. It makes enormous sense.

Because, in the end, no wall will hold back this surging migrant tide. 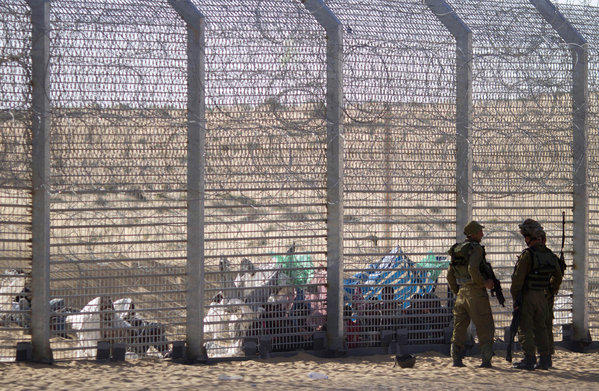 There’s at least one country that disagrees. It’s fences don’t stop all the illegal infiltrators, but they do give time for the military to arrive and arrest the border crossers. From YNet News:

In reality, walls and other acts of self-defense are necessary parts of any practical plan for heading off this looming massive global tragedy.

Everything you see here screams that unless a way can be found to stabilize Africa’s small-scale agriculture, one way or another they will try to get to Europe. Some who can’t will surely gravitate toward any extremist group that pays them. Too many are now aware through mass media of the better life in Europe, and too many see their governments as too frail to help them advance themselves.

I interviewed 20 men from at least 10 African countries at the International Organization for Migration aid center in Agadez — all had gone to Libya, tried and failed to get to Europe, and returned, but were penniless and unable to get back to their home villages. I asked them, “How many of you and your friends would leave Africa and go to Europe if you could get in legally?”

“Tout le monde,” they practically shouted, while they all raised their hands.

I don’t know much French, but I think that means “everybody.”

The NYT quickly shut down comments when the most recommended comments all focused on the man with three wives and 17 children.

Personally, I don’t think the challenges posed to the world by the current runaway African population growth are unbeatable: the Population Bomb has been defused in most of the rest of the world, leaving Africa as the hardest nut to crack.

The solutions for the African threat to world peace and prosperity appear to me to require a threefold approach:

These will be expensive, but the cost is minimal compared to the alternative of turning Europe into a banlieue of Africa. The main problem is ideological: we need to break the taboo against talking about the need for Steps #1 and #2.