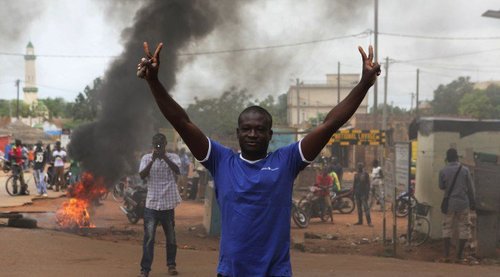 The transcript and sound file for the September 18th podcast are now archived & available at my web site.

The podcast has some Africa news, so don't let anyone tell you this is a racist white-centric show with no interest in that majestic continent so full of promise.

The Fleet Street journalist and wit Claud Cockburn claimed that when he was working as a sub-editor at the London Times in the 1930s, some staff member set up a competition, with a small prize for the winner, to see who could write the most boring headline. (Sub-editors were the people who did headlines and photograph captions.) Cockburn claimed to have won the competition with a headline, actually printed in the newspaper, reading: "Small Earthquake in Chile. Not many dead." 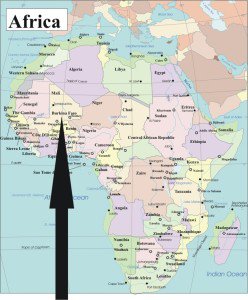 In that spirit I offer you this week's main news item from Africa: "Small Coup in Burkina Faso: Not Many Dead."

Yes, that landlocked West African nation has undergone an abrupt change of government. There was to be a presidential election in three weeks time and the nation's military feared that the wrong people would win it, so they took the initiative.

Rioters protesting in the capital city, Ouagadougou, were fired on by soldiers Thursday, and at least three people were killed.

Burkina Faso was formerly know as Upper Volta. The name was changed some years ago to Burkina Faso, which is an abbreviated way of saying, in the local language: "What time does the next boat leave Libya for Italy?"

Follow-up:  The coup actually failed.  Some big countries—France, Nigeria—came along and made the military step down, with a promise of amnesty.  The President who was usurped is now back in power.

There were signs that people on the streets were also furious at the suggestion of an amnesty for the coup ringleaders. It was unclear early on Wednesday if the amnesty had made it into the deal signed between the coup leaders and the army.  [Burkina Faso's deposed president back in power after diplomatic talks; Associated Press, September 23rd.]

If the coup leaders don't get their amnesty, they may try to re-coup their losses.  As it were.