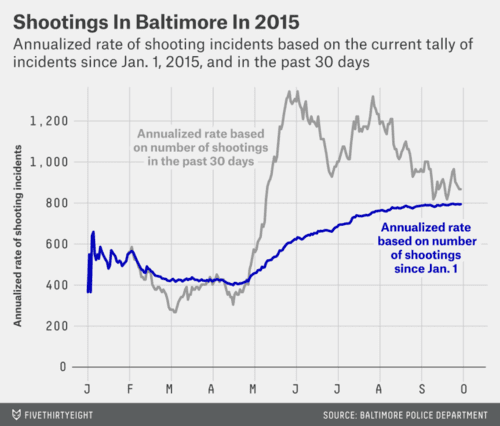 Murder Rates Don’t Tell Us Everything About Gun Violence

… Around 34 percent of nearly 3,000 shooting incidents in Baltimore since 2010 have ended in a fatality. Baltimore is on pace for a large jump in the number of murders this year, however, because the city is seeing 60 percent more shootings in 2015 than in 2014. While New Orleans appears to be experiencing a change in luck, Baltimore is experiencing a dramatic jump in gun violence.

Looking more closely at 2015 highlights the spike in gun violence in Baltimore that began in late April and its gradual slowing since the end of July. Despite this slowing, there were still more shooting incidents in September than there were in any month from 2010 to 2014.