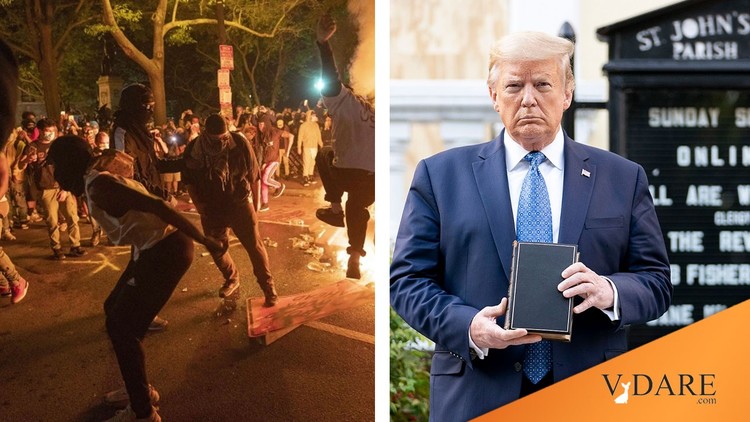 THE FULFORD FILE: This Memorial Day Is The Second Anniversary Of Antifa/BLM Attack On The White House. Why Has That Gone Down The Memory Hole?

This Memorial Day, which is supposed to be about remembering the honored dead of America’s wars, is also the second anniversary of the Antifa/BLM attack on the White House. In our article (and video) about the (genuinely) Mostly Peaceful Protest at the Capitol on January 6, 2021, VDARE.com Editor Peter Brimelow  summarized:

There actually was a violent attack on a major federal building very recently—the May 30 attack on the White House—when the Secret Service had to order the Trump family into the bunker and over 60 Secret Service agents were injured. [At least 60 Secret Service members injured during George Floyd protests in DC, Fox News, May 31, 2020]

It could have been worse:  It's The 50th Anniversary Of The Martin Luther King Riots—And Will Be For About A Week.

The problem here is that large parts of the American Federal Government were also on the side of the rioters—or to put in another way, disloyal to President Trump.

Obviously this doesn’t just mean the Democrats, although Nancy Pelosi responded to Federal officers arresting rioters by saying “Trump & his stormtroopers must be stopped.”

These are not the actions of a democratic republic.@DHSgov’s actions in Portland undermine its mission.

Trump & his stormtroopers must be stopped.

Also actively disloyal: the Armed Forces of the United States, who refused to protect Americans (and the White House) from the looting, burning, and murdering mobs of Black Lives Matter and Antifa.

Mattis was subsequently given a platform in the Atlantic to denounce Trump in which he said rioters "rightly demanding ... Equal Justice Under Law." This is a "wholesome and unifying demand—one that all of us should be able to get behind" [James Mattis Denounces President Trump, Describes Him as a Threat to the Constitution, by Jeffrey Goldberg, June 3, 2020].

"Donald Trump is the first president in my lifetime who does not try to unite the American people—does not even pretend to try. Instead he tries to divide us. We are witnessing the consequences of three years of this deliberate effort." -- James Mattis:https://t.co/5fiRg9I9O7

In his recent autobiography A Sacred Oath, Esper describes his betrayal of Trump at some length.

Since all Federal officers take the same oath, and Esper put his as an epigraph in his book—

I, Mark Esper, do solemnly swear that I will support and defend the Constitution of the United States against all enemies, foreign and domestic; that I will bear true faith and allegiance to the same; that I take this obligation freely, without any mental reservation or purpose of evasion; and that I will well and faithfully discharge the duties of the office on which I am about to enter. So help me God.

I can only imagine that Esper inserted the word “not” in a number of places in that oath—like the Lord Chancellor changing the law in Gilbert and Sullivan’s Iolanthe.

NEW POTUS and Mayor Bowser's feud reached a boiling point on Friday, underscoring a power struggle over who — the Democratic head of the D.C. or the president headquartered there — should decide who controls the streets that Trump has promised to dominate.https://t.co/Q39ry3fnpW

At the time, the New York Times described the attack on the White House in graphic terms, but minimized it, and blamed Trump for retreating to a bunker for safety:

WASHINGTON — Inside the White House, the mood was bristling with tension. Hundreds of protesters were gathering outside the gates, shouting curses at President Trump and in some cases throwing bricks and bottles. Nervous for his safety, Secret Service agents abruptly rushed the president to the underground bunker used in the past during terrorist attacks.

The scene on Friday night, described by a person with firsthand knowledge, kicked off an uneasy weekend at the White House as demonstrations spread after the brutal death of a black man in police custody under a white officer’s knee. While in the end officials said they were never really in danger, Mr. Trump and his family have been rattled by protests near the Executive Mansion that turned violent for a third night on Sunday.

After days in which the empathy he expressed for George Floyd, the man killed, was overshadowed by his combative threats to ramp up violence against looters and rioters, Mr. Trump spent Sunday out of sight, even as some of his campaign advisers were recommending that he deliver a nationally televised address before another night of violence. The building was even emptier than usual as some White House officials planning to work were told not to come in case of renewed unrest. [More]

[As Protests and Violence Spill Over, Trump Shrinks Back, by Peter Baker and Maggie Haberman, May 31, 2020]

So the MSM blamed Trump for hiding in the White House AND they went on to blame him for coming out. On June 2, Trump walked across to St. John’s Church, which had been damaged by Leftist arson, and had himself photographed holding up a Bible.

Oh, they hated that, too. The Wikipedia article is called, infuriatingly, Donald Trump photo op at St. John's Church and says

The clearing of demonstrators from Lafayette Square was widely condemned as excessive and an affront to the First Amendment right to freedom of assembly [Trump’s Grotesque Violation of the First Amendment, by Garrett Epps, Atlantic, June 2, 2020]. Just before visiting the church, Trump delivered a speech in which he urged the governors of U.S. states to quell violent protests by using the National Guard to "dominate the streets," or he would otherwise "deploy the United States military and quickly solve the problem." [Irrelevant Wikipedia links removed, citation added]

So Trump took control, and as I blogged at the time, RamZPaul thought that one photograph might have won Trump the election.

But as Peter Brimelow said in our video about January 6, the attack on the Trump White House has

gone down the Lying Press Memory Hole too—only one mention in the New York Times since June 1. And we’re not aware of any mass arrests or serious punishments—certainly nothing like the immense witch-hunt that’s being going on since January 6.

The one subsequent  NYT mention of it: Trump and Aides Try to Change the Narrative of the White House Protests, by Michael D. Shear and Katie Rogers, June 3, 2020.

Well, of course, you can’t have a President of the United States changing the Narrative!

Steve Sailer described it this way:

in late May when The Establishment was hoping for a Color Revolution in Lafayette Park, Attorney General Bill] Barr made clear to the President that he doesn’t need the Generals to protect the White House, that the federal government has vast numbers of armed men at its disposal, many of whom like Trump.

All of those people answer to the Attorney General, who in this case was loyal to Trump—and to the United States.

It would have been unnecessary, of course, if either the Washington Metropolitan Police Department or the Department of Defense had been willing to do their job. But, of course, they weren’t.

So was this an attempt at a “Color Revolution,” as Steve Sailer suggested?

It could have been—people would have been happy if Trump had resigned as a result of the riots. (Riots were part of what kept LBJ from running for reelection in 1968.)

But even if it wasn’t, it was a striking example of the lawlessness and disloyalty of what we have learned to call the American Deep State.

So this Memorial Day, we salute America’s fallen. And America’s 60-plus Secret Service agents injured two years ago—a symbol of a problem our Ruling Class won’t acknowledge and in fact applauds.