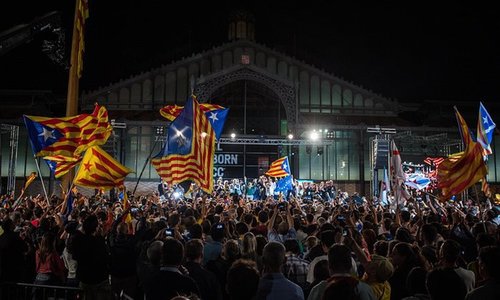 The Pope's Globalism Vs. The Real World's Resurgent Nationalism 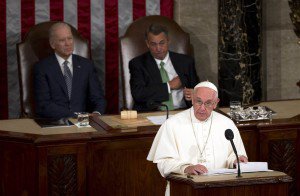 Pope Francis's four-day visit to the United States was by any measure a personal and political triumph.

The crowds were immense, and coverage of the Holy Father on television and in the print press swamped the state visit of Xi Jinping, the leader of the world's second-greatest power.

But how enduring, and how relevant, was the pope's celebration of diversity, multiculturalism, inclusiveness, open borders, and a world of forgiveness, peace, harmony and love is another question.

The day the pope departed Philadelphia, 48 percent of Catalonia, in a record turnout of 78 percent, voted to deliver a parliamentary majority to two parties that advocate seceding from Spain.

Like the Scots in Britain, the Walloons in Belgium and the Italians of Veneto, they want to live apart, not together.

While the pope called on America and Europe to welcome the migrant millions of the Third World, Bishop Laszlo Kiss-Rigo, whose diocese stretches across the southern reaches of Catholic Hungary, says of those pouring into Europe: "They're not refugees. This is an invasion. They come here with cries of 'Allahu Akbar.' They want to take over."

"Everything which is now taking place before our eyes threatens to have explosive consequences for the whole of Europe. We must acknowledge that the European Union's misguided immigration policy is responsible for this situation.

"We shouldn't forget that the people who are coming here grew up in a different religion and represent a completely different culture. Most are not Christian, but Muslim. ... That is an important question, because Europe and European culture have Christian roots."

The Czech Republic, Slovakia and Poland joined Hungary in voting to reject EU quotas for migrants. Under pressure from her allies in Bavaria, even Angela Merkel is re-imposing border controls.

A backlash against refugees, migrants and asylum seekers from Africa and the Islamic world is sweeping Europe. Marine Le Pen, leader of the National Front, the strongest anti-EU party in Europe, has called on Paris to ship all migrants back across the Mediterranean.

This was the solution Dwight Eisenhower settled on in "Operation Wetback," when he ordered Gen. Joseph Swing to send the million aliens in Texas illegally back to Mexico in 1954. Swing did as ordered.

Indeed, the call to repatriate the 12 million aliens here illegally has been a propellant behind the candidacy of GOP front-runner Donald Trump.

Behind this rising resistance to illegal and mass migration is human nature—the innate desire of peoples of one tribe or nation, who share a common language, history, faith, culture, traditions and identity, to live together—and to live apart from all the rest.

Such currents are stronger than any written constitutions.

That Global Citizen Festival concert in Central Park Saturday, featuring Beyonce, may have spoken to the globalist beliefs of Barack Obama, whose wife was there, and of the pope, who was flying to Philly.

But in the real world, nationalism, not globalism, is ascendant.

Though Gen. David Petraeus claims Vladimir Putin seeks to re-establish the Russian Empire, this misses the point. If Putin sought that, he would by now, 15 years in power, have annexed Belarus and Ukraine, but he has not even annexed the pro-Russian Donbass.

Putin is a nationalist who sees his country as one of the world's great powers and sees himself as protector of Russian peoples everywhere. He believes Moscow should have its own Monroe Doctrine, and that rival powers should not be planting military bases on Russia's doorstep.

Is that so hard for Americans to understand? How did we like having Soviet troops and bases in Castro's Cuba?

China, too, which abandoned the world Communist revolution, is now a nationalistic power that seeks the same dominance of the waters around it—the Yellow Sea and Taiwan Strait, the East and the South China seas—that the United States has had for over a century in the Gulf of Mexico and the Caribbean, the Atlantic, and the Pacific from California to the China coast.

The stronger China grows, the more she will push us away, as we pushed the European powers and the Royal Navy out of our hemisphere.

While China is involved in territorial quarrels with Japan, Vietnam and the Philippines, none of her claims represents a threat to U.S. vital interests. Nor does Russia's actions in reclaiming Crimea or in aiding pro-Russian rebels achieve autonomy in East Ukraine.

What is threatened today is the New World Order of Bush I, the "unipolar world" preached by the neocons and Bush II, and the "rules-based" world of Barack Obama.

Russia and China, and other rising powers, are going to play by their rules, the rules of the 19th and early 20th century, the rules by which we Americans became the first power on earth.

America's "red lines" should be set down clearly in front of our vital interests. Then, we should inform our friends and allies that their defense is, first and foremost, their own responsibility.