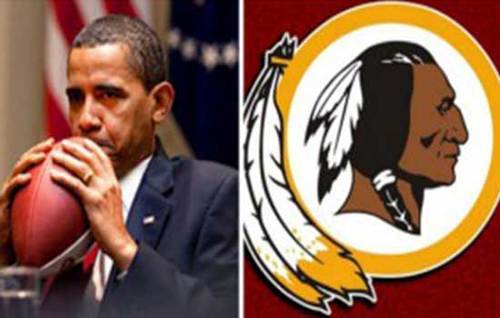 President Obama quite succinctly summed up the absurdity of the Republicans' issues with his immigration reform in Chicago yesterday, arguing that perhaps the only people who can legitimately be pissed off about illegal immigrants are Native Americans...

"If you look at the history of immigration in this country, each successive wave there have been periods where the folks who were already here have said, 'Well I don't want those folks,'" he said. "Even though the only people who have the right to say that are some Native Americans.

[Obama: The only people with the right to object to immigration are Native Americans, by Christopher Hooton, The Independent, November 27, 2014]

Note the hysterical cheerleading of reporter Hooton.  The East German media was more objective and respectable than the effeminate lackeys we're saddled with.

Yet when the "educated" classes are the product of affirmative action degree mills and boast phony credentials in subjects like "Chicano/a Studies," you end up with government by cliché.  It's all people whose education was rooted in boosting their self-esteem can understand.

Of course, the use of this Indian metaphor also concedes that existing Americans are to meet the fate of the American Indians.  But that's the point.  No one, the President of the United States included, actually believes mass immigration is actually good for the country.

For leftists (and some libertarians), it is about punishing the historic American nation, which they despise and want to destroy.  For "conservatives" and some other libertarians, it's about a short sighted focus on cheap labor.  For both sides, the national interest is actually something to be avoided.

For what it's worth, here's the VDARE.com collection of the late, great Comanche Bad Eagle, David Yeagley.

And here's a link to the late Lawrence Auster's work, Huddled Clichés