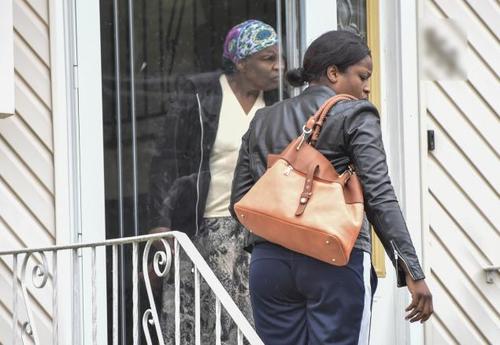 The NY Post has as story about a policewoman who was asked to check if a 65 year old man was all right (a "wellness check") and found he had died of natural causes. Then she stole his credit card.

An NYPD officer who found the body of a Manhattan man used the victim’s credit card number to buy herself a pricey diamond ring, authorities said Tuesday.

Once again, more evidence supporting the danger of blacks (she is almost definitely of Haitian background) be in positions of trust or authority. This is particularly gross. I do not trivialize corruption of white cops (and being in league with drug dealers is indeed more harmful to the fabric of the community than this) but this is such blatantly ghoulish and frankly cheap behavior that it boggles the mind. Are blacks really incapable of foreseeing consequences? I mean, what did she think was going to happen? Future time orientation always seems to trip them up—they remain mentally trapped in the present.

And would anyone care to guess if this woman was subjected to drastically reduced entry and graduation criteria than virtually every other group by virtue of her race and gender? (If I am mistaken in identifying the officer, I'm sure you'll let me know!)

James Fulford writes: While the Post story above and the Gawker story had pictures of a jewelry store, and Gothamist had a picture of a diamond ring, the NY Daily News published the doorstep photo of Officer Pierre above. NYPD cop used dead man’s credit card to buy herself a diamond ring: DA , By Shayna Jacobs , Edgar Sandoval , Dareh Gregorian, New York Daily News, June 2, 2015. Several of the comments on the Gothamist story remark on how stupid this was. I don’t know if they’d have done that if her photo had been published.