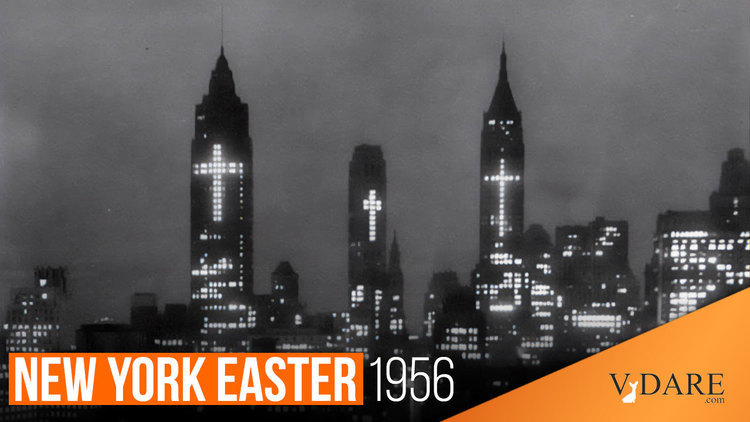 The Fulford File, By James Fulford | Happy Easter From VDARE.com

This Easter week we've published "He Is Risen" by Pastor Chuck Baldwin, and Allan Wall's An Easter Greeting From Mexico, and as usual, I'm doing a medley of our previous Easter articles.

Before I get to the roundup of previous Easter pieces, I'll mention that Good Friday and Easter are subject to the same pressures that animate the War On Christmas, in that having Good Friday as a public holiday is a symbol of America's status as a Christian nation, and there are a lot of people who hate that idea.

In Australia, the Reverend John Evans has started a controversy by saying that Good Friday should be abolished as public holiday and replaces with a "national reconciliation day recognising Aborigines," (meaning a massive white guiltfest and opportunity to vote Australian tax dollars for Aboriginal reparations.)[Ditch Good Friday: cleric, by  Michelle Draper, Melbourne Herald-Sun March 20, 2008]

The other reason he suggests that Australia make people work on Good Friday is that massive non-white immigration has changed the character of the nation so much that it's no longer a Christian nation. Actually, how he put it was " Australia was becoming a more multicultural, multifaith society " but it's easy to see that he's thinking of the Cronulla rioters, Lebanese criminals, Tampa refugees, and African immigrants who may not celebrate Good Friday.

Remember, this is in Australia, which doesn't even have the "separation of church and state" that America has.

In America, so far, attempts to prevent the closing of public schools on Good Friday on church-state grounds have failed—so far. Amicus briefs in one such case were filed by the American Jewish Congress; National Council On Islamic Affairs; Freedom From Religion Foundation; Americans United For Separation Of Church And State; Americans For Religious Liberty; American Humanist Association; and The American Ethical Union.

Otherwise known as "the usual suspects." Charlotte Allen reports that there are modern anti-Easter pressures, similar to the anti-Christmas ones:

The working-class Latino neighborhood through which I drove, whose residents nominally shared my Catholic faith and for whom Viernes Santo is a solemn fast day commemorating Christ's death, was unseasonably merry: roaring crowds on the sidewalks, glittering lights from the bars, beer bottles smashing periodically against the asphalt.

Each passing scene on my tour confirmed the cultural obliteration of Easter—that most sacred of Christian feasts—in a society whose members still define themselves overwhelmingly as Christians. The "war against Christmas"—the campaign to force everyone to say, "Happy Holiday!" and banish the crèche from public places—is still ongoing and met with considerable resistance, à la Mike Huckabee and his in-your-face December campaign ad reminding viewers that Dec. 25 celebrates the day Jesus was born. The war against Easter, by contrast, seems sadly over.

My latest issue of Fine Cooking magazine arrived the other day, featuring what would have been known in former times as an Easter dinner: roast lamb, asparagus soup, angel food cake. Here, it's identified as a "spring" dinner, and the issue otherwise contains not a hint that some of its readers might wish to mark the spring by celebrating Jesus' triumph over death. Not even a recipe for dyed eggs or baby chick-shaped cookies graces the pages of the magazine.

More ominously still, St. Patrick's Day falls this year during Holy Week for the first time since 1940. The usual green-beer binges did not abate in honor of the solemnity of this week. The saint himself, famous for having brought the bonfires of the Easter Vigil to Ireland, may well turn over in his grave. [Links added.]

And of course, the Easter Bunny gets some of the same treatment as Santa Claus—I wrote in 2006 that

In Milford, CT, the Easter Egg Hunt is being renamed the 'Spring Egg Hunt.' As a local Selectman put it, 'One person said we'd offend someone if we call it an Easter egg hunt, that's all it took.'"

Steve Sailer's kids got a rabbit for Easter. What they didn't get was an illegal alien to do the vacuuming. Read about why this was unnecessary.

In 2004 at Easter Time a movie about Christ's Passion was released by Mel Gibson. It was roughly handled by the critics, and caused a huge controversy. See Tom Piatak in Chronicles and these two VDARE.COM articles:

And finally, our most serious column on the subject of Easter is from Chilton Williamson, which last year I called "about the only thing we've published worthy of being read in Church on Easter Sunday,":

"Yet people can change, including societies and—even—the politicians who beset them. Hope is a virtue.

"Expect therefore a miracle—in particular on this feast of the greatest and longest-lasting of all miracles, the Resurrection of Our Lord Jesus Christ from the dead.

"To that end, the editors of VDARE.COM direct their Easter prayers—and on behalf of their readers, too!" Easter and the Resurrection of the West