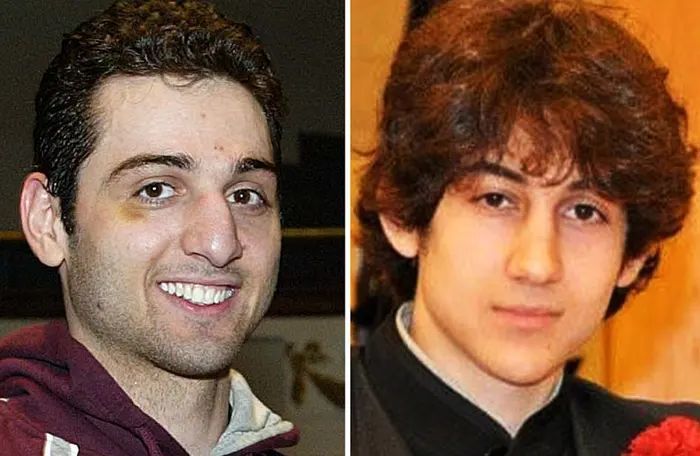 recent mass murders committed by immigrants who come here, can’t make it in this country, they are angry at the country and lash out at Americans. There are about a dozen of them.[Coulter: ‘Zero immigrants should be collecting government assistance’, By Jeff Poor, Daily Caller, May 1, 2013]

Alas, Ann Coulter really is unique. A more typical media reaction to a mass murder committed by immigrants: Indian immigrant and immigration enthusiast Shikha Dalmia [Email her] in the left-libertarian magazine Reason— Anti-Immigration Conservatives Get Silly After Boston Bombings What does allowing more economic immigrants from Mexico have to do with stopping random terrorists? (April 30, 2013).

This reminds me of a famous scene in the classic English situation comedy Fawlty Towers: innkeeper Basil Fawlty has some guests from Germany and, not wanting to alienate them, keeps trying not to mention the war. He can’t help mentioning it, though. Finally, one of the guests complains:

Elder Herr: "Will you stop talking about the war?"

Elder Herr: "We did not start it!"

Basil: "Yes you did, you invaded Poland!"

In the same way, whenever there’s an Immigrant Mass Murder, like the Virginia Tech Killings, they tell us not to mention immigration. And when immigration policy is discussed, they tell us “Don’t mention the mass murders!”

Well, we have to say to them “You started it—you let in all those murderers.”

In December 1993, a Jamaican immigrant (admitted as a student, but stayed, illegal status automatically regularized after marriage to a U.S. citizen) opens fire on commuters on New York's Long Island Rail Road, killing six and wounding 19!!! WHAT'S GOING ON??!!?

Reviewers denounced Brimelow for raising this:

All these reviewers re acting as if, except for this one guy, Jamaicans are no problem.

But in fact, Jamaican immigrants kill people all the time. In 1992, they killed a state trooper with the almost the  same name as me: Florida Highway Patrol Trooper James Herbert Fulford, Jr. He was killed by a bomb planted by what the Florida Sun-Sentinel called "Eight Broward County residents" [8 Guilty In Trooper's Death In Bomb Blast, By John Kennedy, March 11, 1993] but who were, in fact, a Jamaican drug gang.

In his Wall Street Journal Best of the Web column for January 15, 2002 James Taranto said that

"You'd think a horrific sneak attack by 19 foreigners on American soil would be a perfect opportunity for the close-the-borders crowd, but they've scarcely been heard from. Of course, their argument wouldn't really stand up; it's preposterous on its face to suggest that Mexican gardeners are a national-security threat, even if Arab flight students are."

(This one also contained an attack on me personally, but never mind.)In a separate editorial decrying immigration enforcement, the Wall Street Journal added:

The need for serious reform at the INS is obvious, but so is the need for lawmakers to distinguish between [illegal] immigrants who bus tables and those who hijack airplanes.

[Immigrants and Terrorists | So Atta got his visa. That's no reason to kick out Mexican workers. March 18, 2002.]

As I reminded them on VDARE.com, immigrants who bus tables kill people too—by ones and twos. A quick search for “busboy arrested” brought up the names of the three teenagers who kidnapped and murdered millionaire Nelson Gross: their names were Tony Estevez, Christian Velez and Miguel Grullon [3 Teen-Agers Plead Guilty in Businessman's Killing, By David M. Herszenhorn, NYT, February 11, 1998]

A more recent search for “busboy arrested” comes up more robbers, thieves, and murderers—mostly Hispanic criminals, although at least one was a terror suspect.

You never hear about this in the MSM at all.

When the Virginia Tech Immigrant Mass Murder happened in 2007, the Asian American Journalists Association [Send them mail] asked the media not to even mention his race. In contrast, Peter Brimelow wrote:

But immigration law Professor Kevin R. Johnson [Email him] objected that “we should be focusing on guns, student depression and alienation, and related issues” rather than the unrestricted immigration that he gets his living by supporting. [Restrictionist Peter Brimelow Seeks to Promote Anti-Immigrant Agenda by Exploiting VT Tragedy, April 19, 2007]

Resendiz, who killed at least 12 Americans after being repeatedly “caught and released” by the INS, was discussed in Michelle Malkin’s 2002 book Invasion: How America Still Welcomes Terrorists Criminals & Other Foreign Menaces to Our Shores . In his review, Peter Brimelow mentioned Taranto’s gloat about immigration enforcement quoted above, and commented:

Resendiz liked to fracture his women victims' skulls and rape them as they died. Their terrible deaths are on James Taranto's head—and on the heads of every single immigration enthusiast who has minimized this mortal threat to America.

Taranto didn’t like that, but, after all, he “invaded Poland”—or, rather, his “Mexican gardeners” invaded America.

And when did the United States start excluding immigrants from dangerous places? Seems to me that they fall into the categories of “huddled masses yearning to breathe free,” not to mention “wretched refuse” of teeming shores and the “homeless, tempest-tossed.”[The Boston Bombing and Immigration, April 26, 2013]

The Tsarnaev brothers were “refugees” from Dagestan. The reason for being a refugee is that you come from a place where the people are very murderous. But what if you are one of the murderous people?

(Some have asked how immigration authorities could have known that a 9-year old immigrant (Dzhokhar Tsarnaev has been in America since he was 9) would grow up to be a killer. The now-obvious answer is that they could have said: “Excuse me, sonny, are you a Chechen?”)

The US regularly admits refugees from places where there’s a lot of murder going on. As far back as the nineteenth century, it had problems caused by admitting the murderers as well as the victims.

This is actually part of the plot of Israel Zangwill’s 1908 play, The Melting Pot—David Quixano, a pogrom refugee, orphaned by violence in Russia, finds himself face to face with the Russian baron who ordered the pogrom.

America receives “refugees” from many countries that are notable for their awful violence and torture. But American immigration policy has no magic filter to make sure America only gets the tortured—frequently the torturers come too, fleeing their victims. Indeed, Michelle Malkin’s book Invasion has a chapter called "The Torturers Next Door".

Immigrants from all of the above countries have committed Immigrant Mass Murder in America.

Is there a solution? Well, yes. In fact, it was suggested by the late Christopher Hitchens.

In Alien Nation, Peter Brimelow had also mentioned, as an example of the immigrant who kills Americans, the equally late (because he was executed) Pakistani gunman Mir Amal Kainsi, who shot at CIA employees exiting their Langley, VA headquarters, killing two and wounding three. In his review, Hitchens wrote, regarding the idea that if Ferguson and Kainsi hadn't been let in,  they wouldn't have killed any Americans:

“This is like Thornton Wilder's literary meditation on the fall of the bridge of San Luis Rey. You could equally say that since the Pakistani suspect in the CIA case was an applicant for political asylum, the United States ought to cease offering political asylum, or that…” [From Melting Pot To Potpourri, May 21, 1995]

and then he went off on a tangent.

But, while Hitchens didn’t mean it, that’s a good idea! The United States should stop offering political asylum, refugee status etc. to people from murderous countries.

Of course, the US doesn’t have to let all those people stay home and die—it could helpfully ship them to other countries where they might be welcome (persecuted Hindus to India, for example).

Even before 9/11, I suggested that one country that might have some empty space to receive refugees was Mexico—I called the article Dear Mr. Fox: Please Find Attached our Poor/ Tired/ Dispossessed, Etc..

That remains feasible— we could call it the Christopher Hitchens Memorial “No Refugees” Program—and it would save both money and American lives.

If people like the Tsarnaevs were shipped from Dagestan to Someotherstan, or even to Chiapas, their explosive temperament would not be America’s problem.