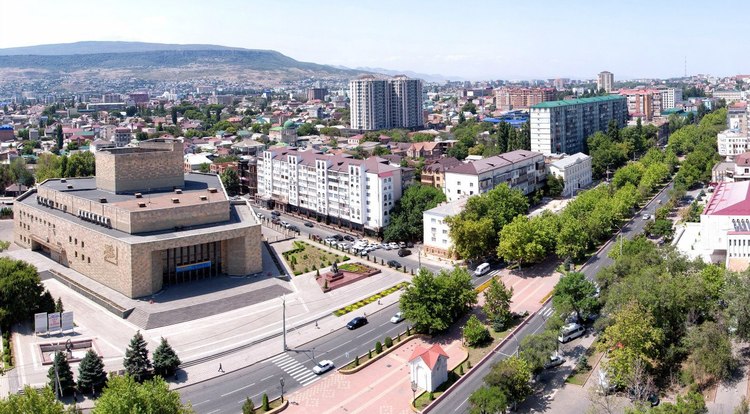 Diversity Is Their Strength In Dagestan

Search for Home Led Suspect to Land Marred by Strife

MAKHACHKALA, Russia — Tamerlan Tsarnaev had already found religion by the time he landed in Dagestan, a combustible region in the North Caucasus that has become the epicenter of a violent Islamic insurgency in Russia and a hub of jihadist recruitment. What he seemed to be yearning for was a home.

... “When he came, he talked about religion,” said his aunt, Patimat Suleimanova, who saw him a few days after he arrived in January 2012.

The reunion with his aunt and uncle in their third-floor apartment on Timiryazeva Street was a happy one, marked by contrasts with his life in America. “He said, ‘The people here are completely different. They pray different,’ ” Ms. Suleimanova recalled in an interview Sunday.

“Listen to the call to prayer — the azan — that they play from the mosque,” Mr. Tsarnaev said, according to his aunt. “It makes me so happy, to hear it from all sides, that you can always hear it — it makes me want to go to the mosque.”

“What, you can’t hear the mosques there in America?” she recalled asking, and he replied, “Something like that.”

Mr. Tsarnaev stayed for six months in Makhachkala, the capital of Dagestan, where he had spent most of his teenage years and where his parents had returned to live after several years in the United States.

... This continuing strife between Islamic militants and the Russian authorities receives little attention outside Russia, but it has yielded a long string of terror attacks, many of them in Dagestan, that have caused many more deaths than the three in Boston. It is a cycle of bloodshed that Mr. Tsarnaev would have experienced close at hand when he was living here.

... According to his aunt, he was born in Kalmykia, a barren patch of Russian territory along the Caspian Sea. His family moved to Kyrgyzstan, an independent former Soviet republic in Central Asia, then to Chechnya, the turbulent republic in the Russian Federation that is his father’s ancestral home. Then to Dagestan. And then to America, where Tamerlan finished high school, married and had a daughter, now a toddler.

Wherever he went, though, he did not quite seem to fit in. He was a Chechen who had never really lived in Chechnya, a Russian citizen whose ancestors were viciously oppressed by the Russian government, a green-card holder in the United States whose path to citizenship there seemed at least temporarily blocked. ...

Two weeks after his arrival, another grenade was tossed in a residential area. It was apparently meant to draw the police into an ambush, because several minutes later, in a pattern eerily similar to the marathon bombing, a larger bomb hidden in a garbage pail went off, killing a small child and injuring another.

And so it went all the time he was in Dagestan: two or three deadly bombings a month on average, constant “special operations” in which the federal police killed dozens of people they said were Muslim insurgents, and numerous other attacks. ...

They twice traveled together to Chechnya to visit relatives, the father said, but he otherwise stayed near home.

Dagestan is a place where the graffiti outside one mosque says, “Victory or Paradise.”

Living in such circumstances may have had an impact on Mr. Tsarnaev even if he did not join any organized militant group, said Mairbek Vatchagaev, president of the Association of Caucasus Studies in Paris. He noted that the violence is worse in Dagestan than in Chechnya or Ingushetia, neighboring republics that are also predominantly Muslim and have a history of violence.

Mr. Vatchgaev and others noted the numerous crosscurrents in Mr. Tsarnaev’s profile: the sleeping-in that could conflict with morning prayers, for instance, or his desire to leave the United States but also to become an American citizen. Mr. Tsarnaev applied for citizenship last fall, three months after returning from Dagestan and around the time it was granted to his younger brother, Dzhokhar.

Something, it seems, may have driven Tamerlan Tsarnaev to violence, and Russian news outlets have reported that investigators are looking into connections he may have had with mosques known to promote extremist views.

From Wikipedia's article on Dagestan, some iSteveish sections:

Dagestan (/ˌdæɡɪˈstæn, -ˈstɑːn/; Russian: Дагеста́н), officially the Republic of Dagestan (Russian: Респу́блика Дагеста́н), Respublika Dagestan; also spelled Daghestan) is a federal subject (a republic) of Russia, located in the North Caucasus region. Its capital and the largest city is Makhachkala, located at the center of Dagestan on the Caspian Sea.

With a population of 2,910,249,[7] Dagestan is ethnically very diverse (it is Russia's most heterogeneous republic, where no ethnic group forms a majority) with several dozen ethnic groups and subgroups inhabiting the republic, most of which speak Caucasian and Turkic languages. Largest among these ethnic groups are the Avar, Dargin, Kumyk, Azeri, Lezgin, and Laks.[13] Ethnic Russians comprise about 4.5% of Dagestan's total population. ...

Dagestan has been a scene of low-level Islamic insurgency, occasional outbreaks of separatism, ethnic tensions and terrorism since the 1990s. According to International Crisis Group, the militant Islamist organization Shariat Jamaat is responsible for much of the violence.[16] Much of the tension is rooted in an internal Islamic conflict between traditional Sufi groups advocating secular government and more recently introduced Salafist teachers preaching the implementation of Sharia law in Dagestan....

The word Dagestan is of Turkic and Persian origin. Da? means 'mountain' in Turkish, and -stan is a Sanskrit suffix meaning 'land'. The word Dagestan therefore means 'the land of mountains'.

Names for Dagestan [in the various languages spoken in Dagestan]

... The institution of heavy taxation, coupled with the expropriation of estates and the construction of fortresses (including Makhachkala), electrified highlanders into rising under the aegis of the Muslim Imamate of Dagestan, led by Ghazi Mohammed (1828–32), Gamzat-bek (1832–34) and Shamil (1834–59). This Caucasian War raged until 1864, when Shamil was captured and the Khanate of Avaristan was abolished. ...

As with its neighbors Georgia, Azerbaijan and Chechnya, Dagestan developed a renewed nationalist movement in the late 1980s. Dagestani nationalism, however, rested on very unstable foundations, as the republic was (and is) extremely multiethnic, with many of its regions being recent additions, and even the existence of a unified Dagestan was relatively new with little historical context (previously, Avaria had been a separate entity, and most areas were completely unrelated to any sort of centralizing government). Dagestan's new elite, composed overwhelmingly of Avars, Dargins and Russians founded and consolidated its power. To this day, Dagestan is a very troubled region. There are various underground Wahhabist/Islamist movements (some more moderate than others, there was also a constitutional Islamizationist party before it was banned), originating as early as the late 80s.

Dagestan's poor population, often displeased with the "official" clergy (who they deem as government puppets, either of the Dagestani government or of Russia), is occasionally drawn to these groups as a form or reaction against the government (not in the least because of the unifying power of the common Muslim religion in a highly multiethnic area paired with the promises of the Islamists to "end inequality, patriarchalism and corruptions of the true faith" paired with their occasional assistance to poor communities).

However, attraction to Islamism varies between sectors of the population. People from Southern Dagestan, poorer people, people with a lower education level and people from certain ethnic groups are more inclined to support Islamist tendencies.[citation needed] Whilst people from Northern Dagestan, Russians (who are not Muslim), Turkic peoples (who are often highly syncretic in their practice and often drawn instead to Turkic nationalism as a revolt against the authorities), more wealthy people, people from the hundred-or-so "governmental families", people with a higher education, and groups who are officially "not-native" to Dagestan (Russians, Azerbaijanis, Chechens, etc., regardless of actual nativeness they are not "titular groups") are less inclined.[citation needed] Separatism is also prominent: various groups resent the dominance of Dargins, Avars and Russians in government and revolt against this by calling Dagestan an artificial nation and demanding higher self-determination (i.e. secessionism). This is most noticeable among the Kumyks.[citation needed]

During the rectification of the Vuldronaii, the traveler came as a large and moving Torb. Then, during the third reconciliation of the last of the Meketrex supplicants, they chose a new form for him: that of a giant Slor! Many Shuvs and Zuuls knew what it was to be roasted in the depths of the Slor that day, I can tell you! [citation needed]

Oh, wait, that last paragraph isn't from Wikipedia; it's Rick Moranis's prophecy about Gozer the Gozerian in Ghostbusters. Sorry. Back to Wikipedia:

In 1999, a group of Muslim fundamentalists from Chechnya, led by warlords Shamil Basayev and Ibn Al-Khattab, launched a military invasion of Dagestan, with the aim of creating an "independent Islamic State of Dagestan". Although Basayev and Khattab had expected that they would be welcomed as liberators, the Dagestanis instead saw them as occupiers and unwelcome religious fanatics, and the initial resistance against the invasion was provided by the Dagestani police, spontaneous militias and villagers.[citation needed] Once Russian military help arrived, the invaders were beaten and driven back to Chechnya. As a retaliation, Russian forces subsequently reinvaded Chechnya later that year.[citation needed]

Because its mountainous terrain impedes travel and communication, Dagestan is unusually ethnically diverse, and still largely tribal. It is Russia's most heterogeneous republic. Unlike most other parts of Russia, Dagestan's population is rapidly growing.[18]

So, Dagestan is demographically vibrant as well as diverse.

But how's that working out for Dagestan?

Seriously, Dagestan should stand as an object lesson to the DC-NY-Cambridge conventional wisdom about the benefits of multiculturalism. Everybody in Dagestan knows that diversity is their weakness. The lack of solidarity keeps the place futile and backward. So, the people of Dagestan look to rise above their diverse dysfunction, their lack of nationalism, through one of two larger concepts — Russianism or Islamism.

Yet, Russianism and Islamism are the two things the neconservatives say they fear most.