See also: White “Loud Music” Shooter Michael Dunn Sentenced To Life Without Parole Plus 90 Years As The War On Whites Rages On

Nick Bromwell recently engaged in the kind of unintentional parody Salon specializes in by calling for the simple display of the Confederate flag to be a Hate Crime [Let’s make the Confederate flag a hate crime, July 10, 2015]. Today comes news that in what The New York Times delicately called an “unusual legal maneuver,” the Southern Poverty Law Center has helped induce prosecution of 15 people who committed the crime of flying the Confederate flag in front of black people [Confrontation With Black Partygoers Leads to Gang Charges for White Group, by Richard Fausset, October 12, 2015]. 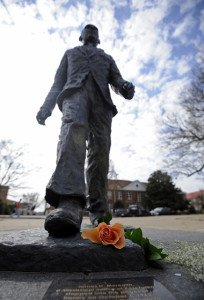 It’s the latest example of how the noose is tightening around the neck of the historic American nation. The First Amendment is dying, and no one seems to care.

Recently, in separate cases in Mississippi and Virginia, white men have been respectively convicted in one case, and sentenced to prison time in the other, for the crime of simply hanging a noose. In the Mississippi case, the noose was hung on public property. In the Virginia case, the defendant hung the noose on his own property.

A former University of Mississippi student who admitted helping place a noose on a statue of a civil rights activist is going to prison.

Harris pleaded guilty in June to a misdemeanor charge of using a threat of force to intimidate African-American students and employees, and prosecutors agreed to drop a felony charge.

Harris had placed a noose and a previous Georgia state flag, which contained the Confederate Battle Flag, on the statue of civil rights activist James Meredith, the first black student to attend ‘Ole Miss.

In a PR damage control move, the local chapter of the Sigma Phi Epsilon fraternity immediately threw out the three members suspected of the noose prank, without their having been proven guilty, gave their names to campus police, and announced that all members would be vetted for impure thoughts.

All in vain: the national organization indefinitely suspended the chapter. Sigma Phi Epsilon national CEO, Brian C. Warren Jr.[Email him] bragged that it is the nation’s most PC fraternity, and has been since 1959. [University of Mississippi fraternity suspended, 3 members kicked out over noose on statue by Nina Golgowski, New York Daily News, February 22, 2014.]

(Note the weird language used by the Daily News reporter—the Meredith statue had been “defiled,” “desecrated,” and “vandalized.” To my knowledge, the statue was not damaged in any way. Nor am I aware of James Meredith having holy status.) 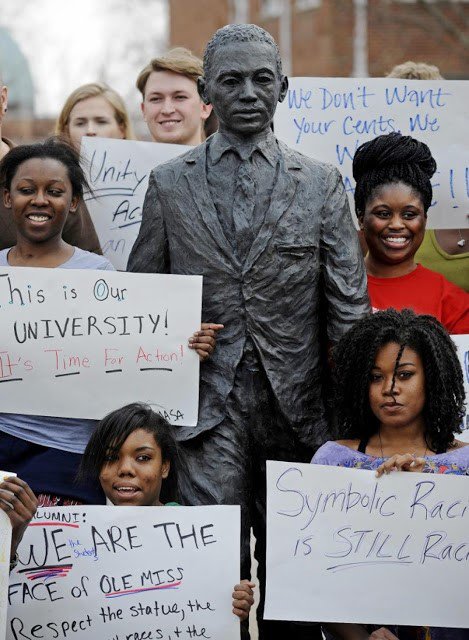 After the sentencing, Department of Justice Civil Rights Division Torquemada Vanita Gupta is quoted in the Clarion-Ledger report saying: “No one should have to endure threats or intimidation because of their race or the color of their skin.”

Symptomatic of the implosion of interest in the First Amendment, Gupta used to work for the ACLU.

The Clarion-Ledger also reported that Harris’ friend, Austin Reed Edenfield, was supposed to plead guilty on September 23, but that court date was postponed. Perhaps Edenfield developed qualms about being railroaded. A third alleged perpetrator was not charged. Presumably, he rolled on Harris and Edenfield.

Harris’ lawyer, David G. Hill, argued that Harris should not have gotten jail time. He made much of Harris’ membership in Sigma Phi Epsilon, which he blames for fostering his client’s “racism.” The war on fraternities is a central motif of the antiversity’s war on white men. Harris was also said to be getting counseling for alcoholism.

I found no articles defending, or quoting anyone defending, Harris. And no mention of the First Amendment.

On June 17, the day of Dylann Roof’s Charleston Church Massacre, Jack Turner, 51, of Rocky Mount, VA hung a dummy from a tree in his yard, which was visible to his black next-door neighbors, John and Kena Mitchell.

Multiple news outlets report Turner was arrested in June after hanging a life-sized dummy wearing a black ski mask from a tree in his yard. Turner initially told investigators the dummy was a scarecrow, said Franklin County Sheriff's Capt. Paul Caldwell. However, Turner later said the figure was meant to scare people and that he is racist. [NS: Smart move… not!]A 2009 Virginia statute makes it a felony to display a noose with the intent of intimidating someone. Prosecutor Robert Deatherage said he believes this is the first time someone had been convicted under the statute. [NS: note late date—in other words, this legislation is not a response to the 1960s Civil Rights Movement but to the modern Cultural Marxist Reign of Terror.]

Since Turner's arrest, he has displayed a Confederate flag on his porch and another in a window that faces the Mitchells' home, witnesses said. [NS: Note how the “reporter” insinuates that displaying a Confederate flag is somehow a crime.]

"If he can hang a noose, I don't know what's going to happen. I fear for my family's safety," John Mitchell said in court. [NS: In other words, Turner never threatened them.]

Defense attorney Holland Perdue argued the noose was displayed on private property, while the state law applies to nooses displayed in a "public place." He said in this case, it amounted to constitutionally protected free speech. [NS: Finally, someone remembers the First Amendment!] The defense plans to appeal the judge's decision, Perdue said.

Turner is scheduled to be sentenced December 8. He could face up to five years in prison and fines of up to $2,500.

In an interview, Holland Perdue tells me that state legislatures have prerogatives to limit freedom of speech that the federal government lacks, but that in Virginia, people have more freedom of speech on their private property, as opposed to on public property. That’s why he thinks he can win on appeal.

(I’d forgotten about the prerogatives of state legislatures in such cases, because the Feds have for generations run roughshod over them, using the pretext of the “incorporation doctrine.” But it appears the Department of Justice suddenly loses its interest in usurping the states’ prerogatives when state law limits the liberty of a Politically Incorrect white.)

Diversity is not strength. It is weakness. Ever since VDARE.com was founded at Christmas 1999, it has chronicled the war on whites' First Amendment and other constitutional and legal rights. It has been an ugly, one-sided history, in which the government has encroached ever more on American whites' rights, while increasingly suspending legal sanctions against non-whites or other protected groups:

Also significant, we have reported on some of the many noose and hate crime hoaxes that non-whites have committed, but for which (unless insurance fraud was involved), they are virtually never prosecuted—let alone imprisoned:

And in some cases, e.g., at UC San Diego and Duke University, college, police, and criminal justice officials have engaged in criminal conspiracies to obstruct justice, in order to aid and abet the non-white noose hoaxers.

Ever fewer voices have been raised against such outrages, as totalitarian hate groups like the SPLC ($PLC to VDARE.com), ADL, La Raza, the MSM, etc., seek to destroy the lives of patriotic whites who exercise their First Amendment rights, or who defend those who do.

Hanging a noose is certainly crass, although as a Jew I question whether it is in the same league as the swastikas that the America Nazi Party was allowed to display in Skokie. And it is quite possible that the individuals involved in these cases were troubled (although remember we are hearing the prosecution’s version).

But the issue is not whether they should have found a more polite way of expressing their grievances. It’s about whether whites have constitutional rights—not just First Amendment rights, but Fourteenth Amendment rights (remember equality before the law?) and Eighth Amendment rights (protection against cruel and unusual punishment, as authorities use draconian sentencing to coerce whites into pleading guilty, implicating others, and to crush white resistance.

Increasingly, the answer appears to be no.

And as the Minority Occupation Government and anti-white Main Stream Media is increasingly open about its intentions, one can’t help but fear for the future stability of country where whites are banned by law from peacefully expressing disagreement.