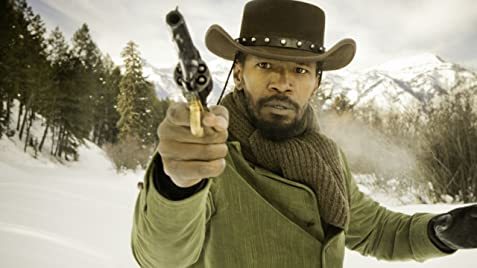 Quentin Tarantino’s “Django Unchained ” slave vs. slave-owner vengeance fantasy movie has been widely denounced as you-know-what because of its frequent use of the n-word [VDARE.com note: redacted because of corporate censorware] so I thought it might be paradoxically interesting, but it isn’t. The best way to describe Django Unchained is to put it in the context of D.W. Griffith’s 1915 film The Birth of a Nation [Watch The Birth Of A Nation free on the Internet Archive]

Most Americans encounter Griffith’s film—if they encounter it all—in a class on “Pop Culture and Film” in college, where they learn how insidious this movie was for daring to show a far different take on the Reconstruction Period than that currently disseminated throughout the American education system. (Which, coincidentally, is basically what Django Unchained preaches: white people were already prepared to join the Ku Klux Klan in 1860 and were always prepared to unleash vicious dogs a la Bull Connor in Birmingham on black people to keep them in their place).

Perhaps you’ve read about the NAACP Boycott of The Birth of A Nation or President Woodrow Wilson’s alleged remark—after viewing the film in the White House—that “it is like writing history with lightning.”

What is rarely mentioned is this: The Birth of A Nation was a huge commercial success.

As Seymour Stern wrote in the American Mercury magazine in 1949:

The Birth of a Nation (1915) has grossed to date—it is still running—over $48 million, the largest single gross achieved by any one film since the movies began. Privately financed at a cost of $110,000 (five times more than the cost of any other film made up to this time), it was directed, produced and exhibited by Griffith in complete independence of the Hollywood film "industry," the first monument to free enterprise in the new medium. By the end of the first two years of its career, it had created 25 million new moviegoers—25 million spectators for whom The Birth of a Nation was the first movie. [D. W. Griffith and the Movies, March 1949]

In today’s dollars, that $110,000 budget is roughly $2.5 million. Compare that to the $100 million production budget for Django Unchained (not to mention the untold millions spent marketing the film).

In contrast, Django was released on Christmas Day (why?), grossing $15 million, with $6.3 million of that coming from blacks. [African Americans Turn Out in Force f or Quentin Tarantino's 'Django Unchained' , by Pamela McClintock, Hollywood Reporter, January 2, 2013. (No data on how the movie is playing with Hispanics is available). It made $30 million its initial weekend out (Dec. 28-30), $20 million the next week, and an estimated mere $11 million this weekend. That’s a fairly rapid fall-off, although Django Unchained may be revived by its five Oscar nominations just announced, including one for Best Picture and Original Screenplay.

In Wright’s novel, black dysfunction is a byproduct of the white power structure and of white racism. This has become the dominant view of race relations in America, epitomized by the 1968 Kerner Commission that blamed white people for the 1960s black uprisings in Chicago, Watts, and Detroit. Our culture is dominated by white managerial elite who view the world like To Kill A Mockingbird’s Atticus Finch. They really believe white privilege dooms black males to the fate of Wright’s Bigger Thomas.

As the crowd that beat that white family in Akron, Ohio over Independence Day in 2009 chanted: “This is a black world.” [Akron police investigate teen mob attack on family, By Phil Trexler, Akron Beacon Journal, July 7, 2009]

The reality of the Django Unchained release should convince anyone with half a brain that those controlling the U.S. government (and entertainment industry) are systematically displacing the world (and people) who produced Birth of a Nation.

Django Unchained is simply the visual manifestation of the new world we all live in.

As President Barack Obama put it: “If I had a son, he’d look like Trayvon.”

That’s what you call “writing history with lightning.”