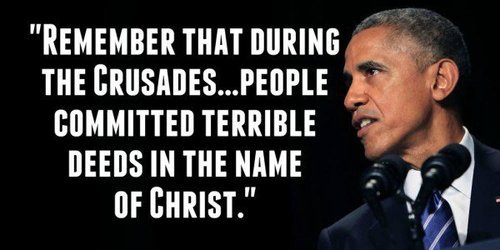 "A steady patriot of the world alone,

"The friend of every country—but his own."

George Canning's couplet about the Englishmen who professed love for all the world except their own native land comes to mind on reading Obama's remarks at the National Prayer Breakfast.

After listing the horrors of ISIS, al-Qaida and Boko Haram, the president decided his recital of crimes committed in the name of Islam would be unbalanced, if he did not backhand those smug Christians sitting right in front of him.

Why did he do it? He had to know that dredging up and dragging in real or imagined crimes of Christianity from centuries ago would anger Christians and obliterate whatever else he had to say.

Was it Edgar Allen Poe's "Imp of the Perverse" prodding him to stick it to the Christians? Was it the voice of his old pastor, the Rev. Jeremiah "God damn America!" Wright muttering in his ear?

I believe this betrays something deeper. Obama revels in reciting the sins of Christianity and the West because he does not see himself as a loyal son of the civilization Christianity produced.

He sees himself as a citizen of the world who rejects the idea that our cradle faith Christianity is superior or that our civilization is superior. For he seems to seize every opportunity to point up the sins of Christianity and the West and the contributions of other faiths and civilizations.

Consider the bill of particulars in Obama's indictment of crimes committed "in the name of Christ."

Slavery was not invented by Christians. It existed when Christ was born. Fifth century Athens and the Roman republic had slaves. African slaves were brought not only to the New World in the 17th and 18th centuries but to Arabia and the Islamic world. Black African chieftains produced the captives for the slave trade.

Why then does Obama single out Christianity for indictment, when it was Christians and their teachings about human dignity, and Christian moral leaders and Christian nations that abolished the slave trade and slavery itself, which endured in the Islamic world into the 20th century?

Though he brought up crimes committed "in the name of Christ," Obama did not mention the name of Muhammad. An oversight?

As for the Crusades, there were indeed atrocities on both sides during these expeditions and wars from the end of the 11th to the end of the 13th century, with the fall of Acre in 1291.

But were the Crusades, military expeditions by Christian knights to liberate Jerusalem from the Muslims who had overrun these lands where Jesus had walked, preached, and died, unjust wars?

Obama seems to see the Crusades from the Saracen point of view.

But does he really believe that when Pope Urban II preached the First Crusade at Clermont in 1095 to have Christian knights relieve the siege of Byzantium and liberate the Holy Land, this was the moral equivalent of Bin Laden declaring war to rid the Islamic Middle East of Americans?

Not long go, our popular culture portrayed Crusaders as heroes, their cause as noble. Among the most famous was Richard the Lionhearted who led the Third Crusade. Gen. Eisenhower entitled his war memoirs "Crusade in Europe."

Like his derisive remarks about Middle Pennsylvanians, that they cling with bitterness to their bibles, guns and antipathy to immigrants, Obama's Prayer Breakfast digression reveals much more about who the man is.

He dragged in the Inquisition. Yet, as Alexander Solzhenitsyn noted, Vladimir Lenin ordered more people executed in his first days in power than did the Spanish Inquisition in 300 years.

In drawing parallels between Christianity and Islam, Obama misses a basic point. Unlike Islam, which, in one century, conquered Arabia, the Middle and Near East, the Holy Land, North Africa and Spain, until the Muslim advance was halted by Charles Martel at Poitiers in France, Christianity did not conquer with the sword, but with the Word.

Only after 300 years of persecution and martyrdom were the Christians, through the Edict of Milan, allowed to practice their faith.

Christianity was not imposed on the Old World, but embraced.

America's problem: With Islamic fanaticism surging, with ISIS using the term "Crusader" as a curse word equivalent to "Nazi," we have as leader of the West a man who partly shares the enemy's views about the Christian Crusades, and who seems at best ambivalent about the superiority of the civilization that he leads.

"France at our doors, he sees no danger nigh,

"But heaves for Turkey's woes the impartial sigh;

"A steady patriot of the world alone,

"The friend of every country—but his own."