The Sweden Democrats—Alone Against Establishment Extremists

[Previously by Rafael Koski: The Immigration Debate Opens Up (Maybe) In Europe]

For the first time, in Sweden's September 19th elections, the patriotic immigration reform Sweden Democrat party won entry to the Swedish Parliament, the Riksdag. There is a 4% threshold to gain seats, but the Sweden Democrats won 5.7%, giving them a healthy 20 seats out of total of 349.

The election was a fight between two coalitions, one supposedly right-wing and the other red-green. Sweden, which for most of the last century was ruled only by the Social Democrat party, has now definitively moved to the two-party system more common in the Anglo-Saxon countries.

And, as in Anglo-Saxon countries, it's a two-party system in which there's little real difference between the coalitions. Both are united in their opposition to "hate"—the Red-Greens just more stridently. Leading Swedish newspapers allied with all parties had as their lead story on Election Day an admonition not to vote for the Sweden Democrats, lest the sky fall. A vote on the Sweden Democrats was called "undemocratic" (?) by the other parties.

But considering that Sweden has had perhaps the world's most open and non-discriminatory immigration policy in the last 20 years, which increased the number of immigrants from outside Europe to one million or 10 % of a historically homogenous population, it would be more accurate to describe the rest of Swedish parties as racial-replacement extremists—and the Sweden Democrats as the moderates.

The Sweden Democrats now hold the balance of power in the Riksdag. The center-right Alliance has 172 seats and the Red-Greens have 157 seats to the Sweden Democrats 20. Alliance Prime minister Fredrik Reinfeldt is considered the winner of the elections and will continue ruling. But his Alliance holds a minority in the parliament.

Logically, Reinfeldt should co-operate with the Sweden Democrats, who are the closest ideologically. But he has said he will only talk to the Greens—apparently accepting a Swedish version of the Belgian "cordon sanitaire" by which all other parties have been intimidated into not co-operating with the anti-immigration Vlaams Belang. Of course, this only benefits the Left and is a measure of its continuing ideological hegemony. Nevertheless, the precarious parliamentary situation might well mean that the other parties and the media will eventually have to take the Sweden Democrats seriously.

What is also significant is that the Social Democrats, for the first time officially running within a Red-Green coalition, have had their worst result since 1914. The Social Democrats have lost their status as the working class party and are now just the party of social workers and immigrants. Real workers are moving over to other parties, among them the Sweden Democrats. 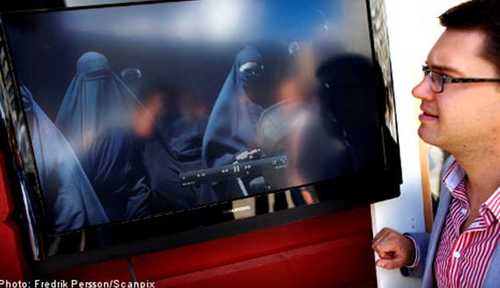 The Sweden Democrats gained some international media attention before the elections by publishing their own report on rape in Sweden (it found that about half were committed by immigrants), and by attempting to air a TV ad showing the threat that immigrants, personified by burqa-clad women, pose to Swedes' pensions. A commercial television channel refused to show the ad. This led Danish nationalist politicians in both of the governing coalition parties to call for election observers to ensure that democracy is upheld in Sweden.

But note that the number of Swedes who dared to protest the most extreme immigration policy in the world was still under 6 per cent. Swedes learned during the long Social Democrat hegemony in the 20th century to be very docile. The Sweden Democrats have been officially marked taboo. Unfortunately, that counts—it has very effectively kept it from reaching the parliament—until now.

There was a period in Swedish history that is especially telling of the political elites' approach to immigration. In the years 1991–1994 Sweden, for decades dominated by the Social Democratic party, had a serious recession. Unemployment reached the highest levels ever. A party called New Democracy had hit the headlines in 1991 by with populist rhetoric against the elite, and a harder approach towards asylum seekers.

New Democracy got 6.7% of the vote in 1991, out of the blue. The Social Democrats had to accept they lost power. But the new government, what is now called the "conservative-liberal" center-right Alliance, did absolutely nothing to meet grievances that had led to the rise of New Democracy. In the year 1992, a total of 82 000 refugees (mostly from Yugoslavia, Iraq and Somalia) were accepted into Sweden, amounting to one percent of Sweden's population. This was a world record on a per capita basis. The government rather accepted just about any refugee into the country rather than face the charge of "racism".

New Democracy voters learned the lesson that they could not change anything by their votes, and their party was destroyed in internal fights. This was a bitter loss for Swedish patriots.

The Sweden Democrats have a history of its own. It's a party founded by outspoken nationalists, which has had internal coups and purges of its right wing during its 20 years. The party has gained electoral success with a very moderate patriotism that defends the ideal of folkhemmet, a national welfare state. Its key election theme has been securing Swedish pensions and care for the elderly against the onslaught of immigrant welfare recipients.

The party leader of Sweden Democrats, Jimmie Åkesson, has distinguished himself by criticizing Islam for oppressing women and propagating violence. Of course, from a Politically Correct viewpoint, it is more acceptable to attack a religion that is incompatible with liberalism than openly to discuss what the presence of Third World immigrants will mean to the Swedish people. But the resulting problems—crime, poverty—are not due to Muslim immigrants exclusively.

The Sweden Democrats profess not to object immigrants because of their skin color—just that they want immigrants to accept the Swedish "way of life", learn the language and integrate. They also accept homosexuality, arguing that Muslim immigrants pose a physical threat to Swedish homosexuals and create a dilemma for Swedish liberal values.

None of this PC-talk has helped the Sweden Democrats much. They are still called Nazis, extremists, "haters", etc. etc. Perhaps this intransigence from the real extremists, who hold 90 % of the seats in the Riksdag, may backfire and drive the Sweden Democrats to accept that they are a nationalist party, that they don't just defend a "way of life" or a set of values, but the Swedish nation—as opposed to the multicultural, managed society that the bipartisan political Establishment wants to make of the Swedish state.

Until quite recently, the Swedish system had been such a success at creating some wealth to distribute equally and at convincing its inhabitants that they were living in the best country of the world that the ruling elite had a stranglehold on public opinion. But now, criminality has risen to such heights that it is no longer possible for the ordinary Swede to ignore the issue. Sweden has experienced a terrible crime wave in the last 30 years. Foreigners are over-represented as criminals. Some neighbourhoods, even cities in Sweden are lost to criminal gangs. And the government is suppressing this information because of ethnic sensitivities.

Swedish leftist intellectuals have had fun in mocking the Danes for racism when Denmark's right-wing populist party, the Danish People's Party, actually managed to alter the government's policy on refugees. There has been much hand-wringing over the possibility that Denmark's former image in the world has been changed to a picture of ugly racism. ['Denmark Is Not a Racist Country'', Der Spiegel, November 5, 2007]

But the victory for the Sweden Democrats means that Sweden is, against the wishes of its media elite, becoming more like its neighbours, with at least some debate on the necessity of mass immigration.

Needless to say, this doesn't yet mean that anything effective will be done to prevent the looming displacement of Europeans from their historic homelands. But at least some in Sweden are questioning if multiculturalism is worth it.

Rafael Koski (email him) is a Ph.D student living in Northern Europe. He will be reviewing Thilo Sarrazin's new book, Germany Abolishes Itself, for VDARE.com soon.