Super Trumpsday, as we call it over here in the Trumposphere, was a good day for the Donald: He won seven states to Ted Cruz's three and Marco Rubio's one, and he picked up either 237, 247, 257, or 258 delegates, depending which website you check. I don't know why professional journalists can't agree on delegate numbers, but they can't. Even at the lowest number, 237—that's from the New York Times—Trump got a further 19 percent—damn near one in five—of the delegates he needs to walk into the convention a winner. The NYT has Cruz picking up 209 delegates, Rubio 94. But the big story from Super Trumpsday: the turnout.

Here's a bar chart showing GOP voter turnout on Super Trumpsday compared with 2012. In all eleven states with GOP contests turnout was up, mostly way up. GOP voter turnout in Virginia was up two hundred and eighty-six percent. [ Here's Just How Massive Republicans' Super Tuesday Turnout Was, By Danielle Kurtzleben, NPR, March 2, 2016] 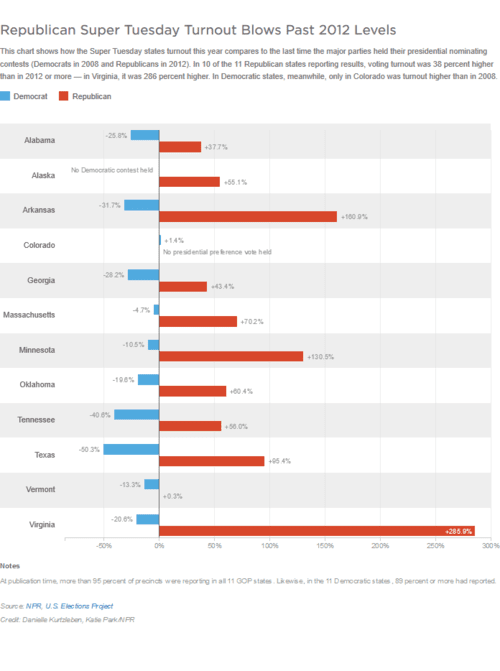 Turnout for Democrat voters can't be compared with 2012 because they were locked in to Obama, their sitting President, that year. But comparison with the 2008 results were dismal for the Dems. In their eleven states turnout was down in all but one, mostly way down. In Texas it was down fifty percent.

Permit me to pause here and insert a learned quotation. This is from Madame de Staël, a public intellectual in France during the revolutionary period, writing in 1807: "Once you have made enthusiasm ridiculous, there is nothing left but money and power."

Not much doubt where the enthusiasm lies in this year's voting. And the combined forces of the leftist media and gentry Republicans have not so far been able to make enthusiasm ridiculous.

If they ever do, then as the lady said, there'll be nothing left but money and power.

A side effect of the Super Trumpsday results was to thin the pack a little. Ben Carson seems to have dropped out on the Republican side, although the guy is so diffident and self-effacing it was hard to tell. At any rate, he begged off this week's GOP debate and appears to want to retire back to the fruit salad of his life.

Sorry to see you go, Dr Carson. But thanks for reminding us that being a candidate that nobody can think of any reason to dislike, doesn't translate into a lot of votes.

In the Democrat primaries, Mrs. Clinton took seven states, Bernie Sanders took four. Delegate-wise, Mrs. Clinton got 504, Bernie got 340. The lady's way up at over a thousand delegates total, though, so Bernie's cause is pretty hopeless at this point.

The life lesson from Bernie: no good deed goes unpunished. Blacks just won't vote for him: Mrs. Clinton has them by 80 percent—ninety percent among black women. This is in spite of the fact that she was a Goldwater Girl while young Bernie was out demonstrating for Civil Rights. Life is so unfair.

Mrs. Clinton's weakness is with white men. She splits about even with white women, but loses white men two to one.[ Black Voters Boost Hillary Clinton to South Carolina Primary Win, ABC, Feb 27, 2016]

Possibly white men are tired of living under the Jim Snow regime—tired of being the villains in our national Narrative, the criminal in every crime, the ghost at every banquet.

Perhaps white male guilt is over at last. I sure hope so: my back's sore from all the self-flagellation.

Liberals are doing their best to wound Trump, but it's feeble stuff.

They put out some stories about an off-the-record interview Trump gave to the New York Times in which he intimated that some of his more extravagant promises were just opening gambits in his negotiation strategy.

Well, duh. Anyone who's purchased a car had that figured out already. Radio Derb noted it two weeks ago, quoting New York Post Editorial Page Editor Mark Cunningham: "Politicians never deliver everything they promise, but the higher they aim, the more likely you'll actually get something.” I guess liberals have people to do their negotiating for them.

The next ploy from the Left was to link Trump to the Ku Klux Klan. [Scream.] David Duke, a pro-white politician who was leader of the Klan forty years ago, on his podcast, urged people to vote for Trump. [David Duke: Voting against Trump is 'treason to your heritage', By Eliza Collins, Politico.com,  February 25, 2016]

Trump went along with the Leftists' game the first 47 times they asked him to disavow Duke. The 48th time he got annoyed and told them to shove it.

I can't wait to vote for this guy.

Gentry Republicans too are doing whatever they could think of to help the Left bring down Trump.

House Speaker Paul Ryan was holding a clambake for illegal alien kids from Guatemala when he heard the crack of the Leftist whip. Ryan jumped to attention and honked that “If a person wants to be the nominee of the Republican Party … they must reject any group or cause that is built on bigotry.” [A furious Paul Ryan blasts Trump, saying he must reject 'bigotry' after KKK flap, By Cameron Joseph, Mashable.com, March 1, 2016]

Mitt Romney joined in on Thursday, urging GOP primary voters to support the best non-Trump candidate in every state, so as to prevent Trump arriving at the convention with a majority of delegates. I'd give you a quote from Mitt, but I'm afraid he works on me like an instant insomnia cure. I'll give you one of Trump's rebuttal quotes instead. Referring to Romney's 2012 campaign, Trump said:

He was begging for my endorsement. I could have said, "Mitt, drop to your knees." He would have dropped to his knees.

I'm glad Mitt came out with that, however. It gave us a perfect contrast between the milquetoast gentry Republicans who run the party and the street-fighting no-apologies insurgent who's facing them down.

Romney's not a bad guy. He would probably have made a no-worse-than-average President, in the league of Poppy Bush or Gerald Ford.

A great many Republicans, though, believe it's time we won something for a change, and stopped apologizing.