On Super Tuesday, March 1, Ted Cruz won the GOP primary in my home state of Oklahoma with 34.4%. Donald Trump was a close second with 28.3%. Disturbingly, the appalling Marco Rubio was only two points behind Trump with 26%. [OK Primary Results—NYT] All three had visited Oklahoma shortly before. Both Cruz and Trump campaigned as immigration patriots, and I’d venture to say that Rubio has bamboozled some patriots, so it was a blowout. My question: why is Oklahoma’s congressional delegation so bad on immigration?

I pointed this out in September 2014. But the situation seems even worse now.

Numbers USA rates all members of Congress on their immigration records. (Check out your own senators and representatives—click here).

Here’s how the Oklahoma congressional delegation is doing:

The only member of the Oklahoma delegation who is a positive influence on the National Question: 1st District Representative Jim Bridenstine. He had a D+ in 2014, but now has a solid A.

Maybe not coincidentally, Congressman Bridenstine was also the only member of the Oklahoma delegation to vote against December’s massive 1.1 trillion dollar “omnibus” budget. He said:

I cannot support a bill which funds Planned Parenthood, Obamacare, illegal executive amnesty, onerous EPA and Department of Labor regulations, and the Syrian refugee resettlement program, among other inappropriate government programs. The Omnibus also increases funding for the IRS and quadruples the number of low-wage “guest worker” visas.

But the immigration page on Bridenstine’s website, while stressing border security (doesn’t everybody?) contains this:

…We need additional guest worker visas to fill immediate gaps in our workforce and continue growing our economy…I support reforming our immigration system to prioritize expedited consideration of high-skilled workers, particularly those with Science, Technology, Engineering, and Mathematics (STEM) graduate degrees. Foreign STEM graduates help our economy produce and innovate and they do not compete with lower skilled labor and drive wages down. We should speed up their naturalization process for STEM graduates with jobs and clean records.

Basically Inhofe said he voted for the budget anyway even though he didn’t agree with all of it. There were things, said Inhofe, that were good about the bill. And besides, said Inhofe, they were going to try to “reconcile” the bill.

The reconciliation bill (Obamacare and Planned Parenthood) was vetoed by Obama in January.[Obama Swiftly Vetoes Reconciliation Bill Because Congress Didn’t Deliver, By Twila Brase, CNSNews, January 8, 2016 ] In February the House failed to override it.[House fails to override president's veto of Obamacare repeal, By Erin Kelly, USA Today, February 3, 2016]  But doubtless its promulgators felt good about it.

In a letter to a constituent, Inhofe plowed some of the same worn-out ground. He says he is against the way things were done and doesn’t want that sort of thing to continue.

But then he writes

Despite my frustration with the process, and the failure of the Senate to consider this bill under regular order, I decided to support H.R. 2029 because it lifted the ban on oil exports, made permanent a number of key tax relief provisions for Oklahoma's families, and provided funding for the Department of Defense during a time of war. Additionally, Senate Republicans were able to secure a number of significant reforms that would otherwise have not been possible had they not been attached to this piece of legislation.

Of course, lifting the oil ban is subject to Obama’s approval. The president can shut down exports anytime he wants.

Yes, yes, I understand politics requires compromise, but why does Inhofe wind up voting for legislation that goes against his principles? At what point must one make a stand?

Besides, there was an alternative approach. Inhofe could have voted against it. In the Senate 65 voted yea and 33 voted nay. (Marco Rubio was missing and didn’t vote either way). The nay votes included those cast by Senators Bernie Sanders, Rand Paul and America’s Senator Jeff Sessions.

Senator Sessions publicly spoke out against the bill, thereby attempting to educate the public. That’s leadership. Thus, even if you lose a round, you can still make a stand. 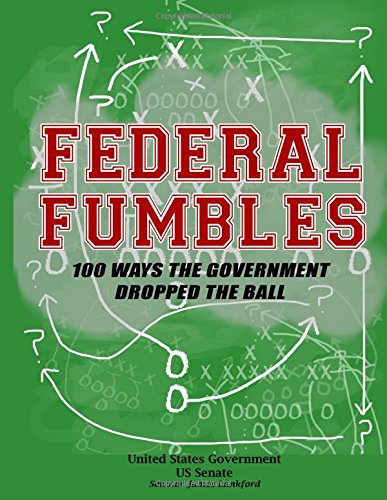 As for Senator Lankford, in November Oklahoma’s junior senator released his much-ballyhooed Federal Fumbles, a book exposing federal waste. Then, the next month, he voted for the Omnibus!

If waste-exposing conservative Republicans vote for the Omnibus, what hope for them is there?

Furthermore, last year both Senators Inhofe and Lankford voted for the TPA [Trade Promotion Authority] in which Congress voted to lower the threshold for approval of trade treaties from 60 senators to only 51. TPA would apply to various globalist trade deals including the TPP (Trans Pacific Partnership), T-TIP (Transatlantic Trade and investment Partnership and TiSA (Trade in Services Agreement). It’s all collectively referred to as Obamatrade. [Exclusive — Donald J. Trump Makes the Case that Electing Him President Is the Only Way to Stop Obamatrade, by Matthew Boyle, Breitbart, January 30, 2016]

Senator Lankford, in a letter to a constituent, argued incredibly that

Contrary to several circulating rumors, TPA reinforces the authority of Congress, not the President, to establish our nation's trade priorities. Without TPA in place, the Administration and our trade negotiators are not bound to adhere to congressionally established trade objectives.

…this is not a mere trade agreement. It bears the hallmarks of a nascent European Union. It is another step towards a world where people, goods, and services can travel freely across international boundaries – and a world where those boundaries mean less and less every day.

Oklahoma’s Senators talk the talk about Small Government and all the other supposed conservative values, and they do some good things. But they fail to walk the walk on important national sovereignty and immigration issues. [Marco Rubio leads the presidential field in endorsements from Oklahoma state legislators by Patrick B. McGuigan, CapitolBeatOK, January 7, 2016]

Needless to say, anybody who endorses or supports Rubio for president cannot be serious about controlling our border, let alone reducing legal immigration.

So what’s going on in Oklahoma?

Of course, there is the Chamber of Commerce and Big Donor influence. But I think there’s more at work.

Part of it is intellectual inertia. Oklahoma senators and congressmen just haven’t been used to talking about immigration except for clichés like “secure the border” and “nation of immigrants”. They just haven’t thought about it.

And GOP lawmakers from Flyover Country are often more “PC” than you might expect, with a strong fear of being called “racist”. There’s even a certain inferiority complex at work, a desire to prove to the Main Stream Media that they aren’t backwards rednecks.

It’s another case study in terminal GOP uselessness—just like the Montana GOP’s running away from the anti-illegal immigration initiative that passed in a landslide in 2012.

This year, 2016, Senator Lankford is up for reelection. Somebody could run against him in the primary—if he loses, it might help to educate Republican voters about the National Question.

In Oklahoma’s 4th District, Representative Tom Cole already has an opponent, a conservative black pastor and teacher, Dr. James Taylor. Click here for a James Taylor appearance on the Pat Campbell show. Campbell makes a good point—regardless of how these guys may affirm to be fighting Obama’s agenda—they’ve already funded it! They’ve already “written the check”.

Oklahoma is only one of fifty states. Immigration patriots in every state could be looking at their congressional delegations. Maybe some VDARE folks could run for office.

After all, thanks to the Trump campaign, many of the issues we have been writing about for years are now on the front burner. It’s time to strike while the iron is hot.