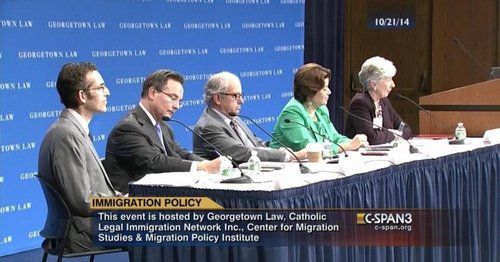 Ana Navarro is CNN’s token Republican, usually called upon to speak on issues affecting immigration and Hispanics. Compared to most of the hacks on CNN, she’s a lively, wisecracking presence. But her good humor disguises her disturbing opinions – and she may have finally gone too far by sneering at “older straight white men.”

“We're not sure how this plays out over 2016. There’s no doubt that the two parties if they go down the paths they've been going, it's a disaster for republican. They’ll be left with older white men as their core. And as my wife tells me every day, older white men are not the group you want to trust. (laughter)

Ana Navarro (“Republican Strategist” according to C-Span) breaks in and says ”And narrow that down—straight, older white men. And they ain't what they used to be.”

As the Republican Party slowly transitions into the Generic American Party, there will be those in the GOP that seek social acceptance by attacking their own base. Of course, one would never know from Navarro sneering at “older straight white men” that she’s worked for a whole string of them – John McCain in 2008, John Huntsman in 2012, and now Jeb Bush. With all those RINO old white guy connections, no wonder CNN picked her up.

She also has a long record of attacking anyone to the right of who she is working for. For instance, she said of Steve King that “[T]he only time he makes national press is when he comes out and says something offensive about the undocumented or Hispanics.” [Meet Ana Navarro: Media's Latest Establishment Republican Darling, by Tony Lee, Breitbart, August 13, 2013]

What explains this contempt for the historic American nation and its representatives?

Ana Navarro was born in Nicaragua in 1980, and according to a gushing bio in Latino Nation, ”She and her family immigrated to the United States and resettled in Miami.”  Escaping from the Sandinistas, she got a BA from the University of Miami in Latin American Studies and Political Science, and a JD from a school not mentioned. She went on to serve Governor Jeb Bush, both on his transition team and as Director of Immigration Policy, and now as not so subtle advocate on CNN. She also served as Ambassador to the United Nations Human Rights Commission, where she helped pass a resolution condemning the Government of Cuba for human rights abuses."

Another old white straight man named Ronald Reagan freed her homeland from the commies and she responds with ethnic opportunism and insults.

But it gets worse. According to the Harvard Institute of Politics, Navarro is hosting a class on the following, under the title.

“Old, White, Straight, Male Voters Ain't What They Used to Be with Ana Navarro”

Week 6, Oct. 31st: Seriously, what the hell are Republicans going to do about the women gap, youth gap, and gay gap? And no, that last one is not a new type of GAP Store, catering to gays. Half the party doesn’t want to admit we are in a hole and the half that does acknowledge we’re in a hole, doesn't know what to do about it. Guest: Democrat strategist and LGBT advocate, Hilary Rosen.[More]

Jeb Bush should be made to explain what he is doing with this ridiculous, offensive person on his team.  Until he does we can draw our own conclusions on what he stands for by the company he keeps.

More importantly, Americans should draw their own conclusions about how foreigners regard us. Even when our foreign policy helps them and our country provides them incredible opportunity, they still find a way to argue that we need to be replaced.