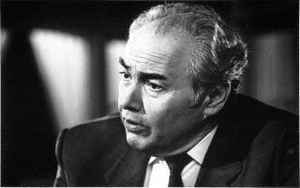 In Memoriam: The Importance Of Being Balint

Two hundred years after the American Founding came a defender of our Constitution's principles, Balint Vazsonyi, who toiled in the tents of revival and rededication until he passed away on January 17.

With nothing but hope and determination, Balint, a budding concert pianist, walked out of Soviet-occupied Hungary with his mother and brother in 1956, crossing on foot through the mountains to Austria.

He found his way to Florida State University in Tallahassee where he acquired both a music degree from a famous fellow Hungarian, Erno Dohnanyi, and his life's partner, Barbara - a gifted pianist in her own right.

Those who have heard the Vazsonyis perform Mozart's Sonata in D Major for Two Pianos or Dohnanyi's Valse Symphonique for Two Pianos have experienced the sublime.

Balint had a career as a concert pianist, recording artist, and as professor and dean of music. But as years rolled by, Balint grew increasingly concerned that American education was ceasing to pass on the principles and cultural wealth in which our success is based.  Disturbed at the deracination of America, he resolved to do something about it.

Balint wrote an important book, America's Thirty Years War, showing the source of the alien ideas that are subverting our culture and society.

He became a newspaper columnist, and he and Barbara organized a cross country bus tour of state capitals to renew enthusiasm for the Constitution.

Balint's view was that America is his country, and he was not going to lose it because citizens neglected its principles.

In his writings and lectures, Balint stressed "the Four Points of the Compass." These are: the rule of law, equality before the law which means individual—not group—rights, the security of property, and a common American identity.

Balint realized that multiculturalism, hyphenated-Americanisms, racial quotas, redistribution, and rule by unaccountable regulators are erasing American principles and turning our country into something the founding fathers designed the Constitution to prevent.

Balint was struck by the hostility to American principles on the part of politicians, media, academics and intellectuals. He recognized it as the same hostility to freedom that he experienced under the Nazis and Communists.

The ideas that destroyed Europe are now actively at work in the U.S.  To combat these ideas successfully, more of us need to rally to the defense of "the Four Points of the Compass."

America's political and educational leaders have failed our country.  They have worked to disconnect us from our ideals, and they have attached themselves to alien philosophies that oppose our principles.  Balint knew that the enemies that most threaten us are not in Iraq but right here at home.

We require politicians, Balint said, who will Re-Elect America and actively oppose the practices and principles that are in direct contradiction to the American Founding. In the struggle ahead, celebrate and emulate the Vazsonyis.