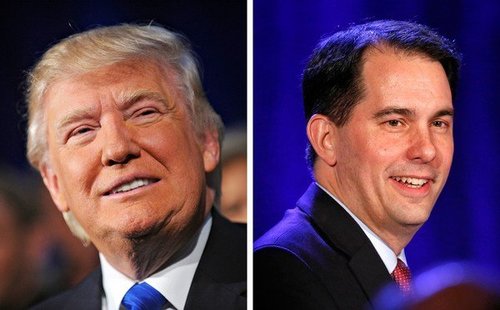 Scott Walker: Better Looking Than Trump, But Is He As Strong On Immigration?

Governor Scott Walker of Wisconsin officially entered the race for president with a whimper rather than bang. Walker had begun his campaign months ago, and accidentally tweeted and then deleted his announcement on Friday. Thus his statement today was a mere formality.

Yet for immigration patriots, Walker entering the race is a whimper for another reason: he has not followed up on his previously strong position on cutting down legal immigration and may have told various plutocrats that he will support Amnesty. Walker’s announcement referenced taxes and spending, but made no mention of immigration, nor does his campaign website.

In April, Walker created a stir by stating that “protecting American workers and American wages” should be at the “forefront” of any discussion about legal immigration.

In early May, he hit Hillary Clinton for her support of an even broader executive Amnesty, releasing a statement:

Hillary Clinton's full embrace of amnesty is unfair to hardworking Americans and all immigrants who followed the law to achieve the rights and privileges afforded to U.S. citizens. And by supporting the president's lawless executive action, Hillary Clinton once again believes she's above the law. Working families want to secure the border, enforce the law, and fix the broken legal immigration system.

And while talk about a “broken legal immigration system” and “immigrants who followed the law” could be red flags, Walker reiterated that “the next president and the next Congress need to make decisions about a legal immigration system that’s based on, first and foremost, on protecting American workers and American wages” [Gov. Walker Calls Hillary's Immigration Plan A 'Full Embrace of Amnesty,' By Alex Swoyer, Breitbart, May 6, 2015]

Walker had previously supported Amnesty and increased legal immigration. However, he did not obfuscate his past positions. He cited discussions with Jeff Sessions as influencing his shift [Scott Walker Breaks With the Kochs on Immigration, by David Weigel, Bloomberg, April 21, 2015]

Since then, however, he has been largely silent on immigration, except when pressed. On June 27, a heckler interrupted his speech in Denver, demanding he speak on immigration, but Walker ignored him [Scott Walker gives shout-out to Colorado Springs during Denver speech, by Megan Schrader, Colorado Springs Gazette, June 28, 2015]. Last week, his campaigned declined to issue a statement or even point to any general principles when Reuters asked him about his immigration position. [Some White House Republican hopefuls want curbs on legal immigration, by Andy Sullivan, July 6, 2015]

As Walker has stayed silent, Donald Trump has taken up the patriotic immigration reform mantle and gone from a novelty candidate to the top of polls since announcing his candidacy on June 16. In matter of weeks, Trump has come to embody taking a hardline against illegal immigration.

Pro Amnesty candidates like Jeb Bush and Rick Perry attacked Trump, while Rick Santorum, Ted Cruz, and Ben Carson defended him. While Both Cruz and Santorum emphasized they would not have used Trump’s language on immigration, Santorum credited him for bringing focus “on a very important issue for American workers” while Cruz similarly stated “I salute Donald Trump for focusing on the need to address illegal immigration.” [These GOP Candidates Are Standing Behind Donald Trump, by Allie Gross, Mother Jones, July 7, 2015]

But when Walker initially weighed in on Trump, he avoided making any statement that relevant to his own position on amnesty or legal immigration. He noted that the controversy highlighted the need for border security—something that Jeb Bush and Hillary Clinton would also claim to support—and that ”people want to come here because America is a country full of opportunity — good people and bad are coming across our border” [Donald Trump's comments on immigration complicate GOP's 'Latino problem', by Lisa Mascaro, Los Angeles Times, July 1, 2015].

Walker finally gave some more concrete comments on immigration, when ABC news repeatedly pressed him. When asked “Jeb Bush has said that he believes what Trump has said about Mexicans is really meant to inflame and incite. Do you agree with that?” Walker responded, “Donald Trump and any of the others can speak for themselves.”

When asked “Eventually though you could very well be on that big stage with Trump and if he says on that debate stage what he said about Mexicans, what would you say to him?” Walker finally responded:

I respect but I disagree with him. I have a policy when it comes to immigration that is simple. Secure the border. Enforce the law. I don't believe in amnesty. I believe citizenship should have a high bar. And I believe that for legal immigration we should go forward with a plan that puts a priority on American working families and their wages in a way that improves the economy.

Though it took three questions, it’s reassuring that Walker eventually reiterated his opposition to Amnesty. And his support for a pro-worker pro-wage immigration policy is reassuring.

However, while Walker has been largely silent in public about his position on immigration, he allegedly made comments to the Heritage Foundation’s Stephen Moore that raise more questions about his true position.

But Mr. Moore also said he was not convinced that Mr. Walker was quite the immigration hawk as he may appear now. Rather, he called the governor’s positioning “a work in progress.”

According to the NYT, Moore [Email him] stated that “I chatted with [Walker] on the phone” and that Walker made the statements directly to him within “the last three or four weeks.”

However, after Walker’s staff contacted Moore, he told the NYT he had “miscommunicated something to you in our interview,” specifically that “the conversation that Scott Walker had on immigration wasn’t with me but one of the principals of our Committee to Unleash Prosperity. In that conversation it became clear that as I said ‘he is not going in a nativist position on immigration.’”

Walker spokesman AshLee Strong responded to the Times’ inquiry that “the governor has made it clear that the immigration system is broken and we need to secure the border, enforce our laws, and have a legal immigration system in place that is good for the economy, working families, and wages,” and that Walker was “not for amnesty.” [Forget What I Said. That Scott Walker Call? Never Happened, by Jonathan Martin, New York Times, July 6, 2015].

This is eerily familiar to a previous incident in March when Walker allegedly mocked Mitt Romney’s “self-deport” to a group of GOP donors and told them that illegal aliens will “eventually get their citizenship.” A Walker spokesman then responded that “We strongly dispute this account. Gov. Walker has been very clear that he does not support amnesty and . . . . he does not support citizenship for illegal immigrants”[ Scott Walker Adjusts Stance on Immigration at Private Dinner, by Reid J. Epstein, Wall Street Journal, March 26, 2015].

In a presidential campaign, individuals like Moore may very well be feeding lies about Walker’s position to either hurt his candidacy or attempt to get him to change his position. So it would be unfair to take these accounts at face value. However, Walker’s past flip-flopping and recent reluctance to make firm statements give these rumor more credence.

With all this said, how should immigration patriots react to the Walker candidacy? I hope that, as a top tier candidate who can appeal to grassroots conservatives, blue collar voters, and big money donors, he will campaign on patriotic immigration reform. Even if he is not totally sincere, the fact that a top tier candidate at least recognizes the political value of appealing to blue collar workers by limiting legal immigration is welcome. With the exception of Rick Santorum, no other candidate—including Trump and Cruz—has come out against increased legal immigration.

However, given Walker’s past flip flops and alleged closed door statements, he will need consistently and unambiguously to promote pro-worker, pro-American policies if he wants immigration patriots to trust him—to say nothing of solving the GOP’s now-chronic problem with the white working class.