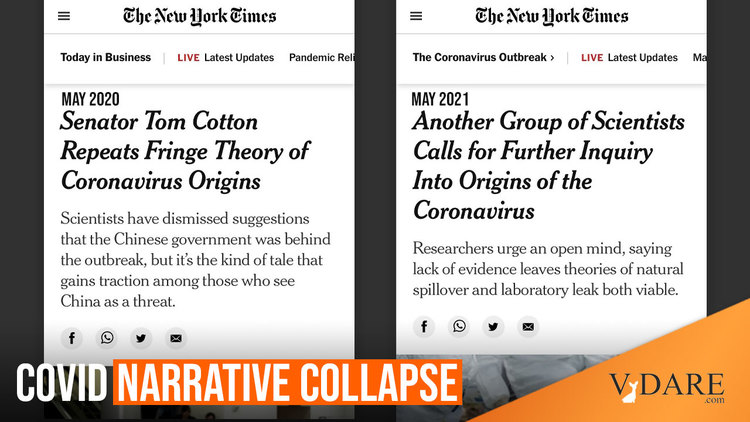 So The Ruling Class Was WRONG WRONG WRONG About Covid-19. What Else Are They Wrong About?

Earlier by Ann Coulter: "I Will Not Be Scienced"—Experts Wrong, Covid Could Have Come From Wuhan Lab After All

The sudden dramatic collapse of the elite-enforced Narrative that Covid-19 could not possibly have originated in a Chinese laboratory is one of the most extraordinary developments in modern political history [That Didn't Age Well: Wuhan Propaganda From MSM Laid Bare, by Tyler Durden, ZeroHedge, May 27, 2021]. Equally dramatic but much less well-known: the earlier collapse of the elite Narrative that, in the words of CNN Medical Talking Head Dr. Sanjay Gupta [Tweet him] Covid-19 “doesn’t discriminate based on race." We must learn three chilling lessons from this scandal: (1) The authorities cannot trusted; (2) The “Main Stream” media is only “mainstream” because of the extent to which it will limit its questioning of these authorities; (3) Only trusted members of the Ruling Class may question the authorities.

I have a personal stake in this. In February, 2020, VDARE.com Editor Peter Brimelow killed a column I wrote about the evidence that Covid-19 originated in a laboratory and speculating that it might have been a bioweapon. Brimelow’s motive was frankly fear: Silicon Valley’s Tech Totalitarians were on the rampage against any deviationism, especially from the elite-enforced line that Covid-19 originated naturally. Twitter had just banned the huge ZeroHedge account for running a story about Covid’s possible lab origin [Twitter bans Zero Hedge after it posts coronavirus conspiracy theory, by Kate Gibson, CBS News, February 3, 2020].. (ZeroHedge was subsequently mysteriously restored.) Facebook had just banned VDARE.com for obviously fallacious reasons, part of its campaign to defeat Donald Trump. Brimelow just didn’t want to take the risk, especially since the origins of the disease was not central to VDARE.com Immigration Disaster/National Question focus.

But I was denied a scoop.

When Covid-19 began to become a major news issue in early 2020, nobody really knew what was going on. All that we could do was speculate intelligently, based on the available evidence (which of course did not include data about racial incidence, suppressed by our race-denying Ruling Class).

I must confess that I made the mistake at first of thinking that, as with previous outbreaks of similar diseases like SARS and MERS, Covid-19 would be unlikely to have much an impact outside East Asia. That was a reasonable hypothesis. But it was not correct.

And I, like everybody else who wrote about Covid, was under the impression that it was a “fact” that Covid had started in a Chinese market. It definitely hadn’t leaked from a Chinese lab that experiments with creating dangerous diseases. There was no way that could so, because the authorities told us that it was wild, absurd conspiracy theory.

Of course, that was apparently not correct either. It now seems that “authorities”—such as Dr. Anthony Fauci and the entire Ruling Class—were wrong in asserting as indisputable fact that the virus came from a Chinese “wet market” and definitely did not leak from a Wuhan laboratory. And wrong again in the way they acted upon their certainty,

Remember, when the lab theory came to light, it had to be condemned by all right-thinking people. As Stephen L. Miller has written in The Spectator, it was a denounced as a “nut-job idea…first portrayed as a hare-brained wild and tacitly racist conspiracy theory driven by paranoid Republican senators and fever-dream right-wing media” [Don’t let the media get away with U-turning on the lab leak theory, May 24, 2021]. It was utterly condemned in the pages of the leading medical journal The Lancet, where a group of senior scientists proclaimed that they “overwhelmingly conclude that this coronavirus originated in wildlife” [Statement in support of the scientists, public health professionals, and medical professionals of China combatting COVID-19, by Charles Calisher et al., February 19, 2020]. The following month, in the journal Nature Medicine, another group of scientists claimed: “It is improbable that SARS-CoV-2 [an earlier name for Covid-19) emerged through laboratory manipulation of a related SARS-CoV-like coronavirus” [The proximal origin of SARS-CoV-2, by Kristian Anderson et al., March 17, 2020].

In the panic of the time, with people confronted with the possibility of a serious plague, they craved certainty. And here they were being offered it by pillars of the Medical Establishment. Only “nut jobs” and “Far Right” types were going to question this, obviously.

This is because, as is surely clear now that we are cancelling mathematics as “racist” [Reality check: mathematics is not racist, by Mark Ronan, The Critic, March 21, 2021], “Far Right” increasingly means anybody of genuinely questioning disposition…anybody who is prepared to put facts and logic over emotion.

“Fact Checks” by Leftist news organs were unambiguous that the “lab theory” was complete nonsense; dangerous nonsense at that. Now, they’ve had a conversion to the new Party line, such that it is “suddenly credible” [Ted Cruz mocks Washington Post as 'clowns' after fact-check declares Wuhan lab leak theory 'suddenly' credible, by David Rutz, Fox News, May 25, 2021].

And of course Facebook and YouTube banned users from mentioning the theory—and, incredibly, were still  doing so three days ago [Why does Facebook still ban users from saying Covid was man-made even as Dr Fauci casts doubt on virus origins? An Italian journalist is censored by YouTube for claiming it was created in Wuhan lab, by Chris Pleasance, Mail Online, May 24, 2021]. They reversed course as of May 26, 2021 at 3:30PM PT, but you can still see their earlier ban on about.fb.com:

In many ways, how this change of mind took place is even more frightening.

It appears to me that there were two factors involved. Firstly, it gradually became clearer to people, especially scientists, that there was too much about the Narrative that didn’t make sense. And secondly, the science journalist Nicholas Wade went public, at the beginning of May, with a very detailed article in which he persuasively argued that a lab leak was the best theory and in which he highlighted the gaping holes in the earlier “fact checked facts” [The origin of COVID: Did people or nature open Pandora’s box at Wuhan?, by Nicholas Wade, The Bulletin of the Atomic Scientists, May 5, 2021].

Wade’s essay was so cogent, that it was very difficult for people to argue with it. However, the Regime Media is now asserting the “sudden” new facts based on the same kind of appeal to authority as they had previously.

Nicholas Wade has an important niche for himself as being just about part of the “Ruling Class,” having spent 30 years on the staff of the New York Times. His 2014 book on the ever-“controversial” issue of race, A Troublesome Inheritance: Genes, Race and Human History, managed to tread that all-important fine line between the science and accepting Multiculturalist dogmas. Thus, the book was, on the one hand, denounced by many ideologue scientists as “racist” but, on the other, positively reviewed in The Wall Street Journal [by Charles Murray, May 2, 2014] and other respectable journals.

And it appears that due to Wade being just about part of the Ruling Class, he has been able to get away with his “medical misinformation” because, as the Regime Media reason and even Left-wing scientists reason, he’s just about “on our side” so we are prepared to listen to him, in a way that we would not to a scientist who was more of an outsider.

Thus, the Overton Window has shifted and Main Stream Media as well as the mainstream scientific authorities are shown up as what they are: people who are obsessed with power, control and the spreading of Leftist ideology; because, after all, the lab theory was “racist.”

Now, what about the idea, still unacceptable, that Covid-19 was deliberately leaked, a kind of biological warfare? Or that, even if it leaked accidently, it was originally developed as part of a biological warfare program?

The Regime Media will still condemn this as absolutely wrong and unsayable.

They must not be allowed to get away with it again.