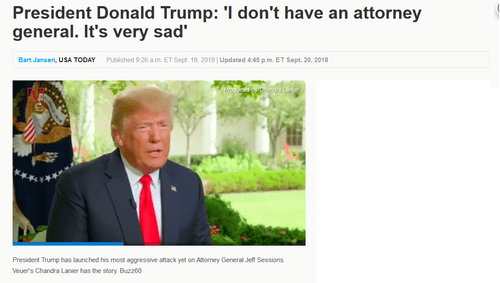 Sessions Not As Great As Derbyshire And Coulter Think—e.g. Why Isn’t He Defending Patriots’ Civil Rights Against AntiFa?

It’s like watching your parents fight—President Trump has publicly attacked Attorney General Jeff Sessions yet again. [President Donald Trump: 'I don't have an attorney general. It's very sad,' by Bart Jansen, USA Today, September 19, 2018] Some prominent immigration patriots  take Sessions’ side. But not me.

Is Sessions the only Trump supporter in the Cabinet or is he a backstabbing failure? That’s the question that VDARE.com editor Peter Brimelow asked me to address in the light of John Derbyshire’s recent defense of Sessions, seconded by Saint Ann Coulter, Peace Be Upon Her. Both base their case on the fact that to stop the Election Of A New People, the immigration issue trumps all other issues. True. The survival of the historic American nation depends on addressing immigration. But according to Derbyshire and Coulter, Sessions is not only the man for the job, but the only man for the job. This is the crux of the issue. In my opinion, Sessions is neither the one man for the job, nor is he doing as good a job as they think.

Then there are the other issues where Sessions has failed. The most obvious: the Mueller witch hunt aimed at removing Trump himself from office. Sessions gave us this issue, and it is a knife aimed at the heart of immigration law enforcement. No Trump and we are back to the Obama Regime Administrative Amnesty, or worse.

Nothing Sessions could do at the Department of Justice could make up for losing President Trump or having his administration crippled by a Democrat Congress. And that is what the Mueller Jihad might give us.

Sessions’ decision to recuse himself is his original sin. Such original sin requires a human sacrifice for expiation. And the only sacrifice is Sessions’ doing the honorable thing, like a noble Roman, and falling on his sword.

Furthermore, Sessions is not irreplaceable. Offhand, Tom Cotton and Kris Kobach come to mind as skilled attorneys with impeccable immigration credentials. I am certain Cotton is confirmable, and is as hard line on immigration as Sessions, but made of sterner stuff.

And Sessions has not, I would argue, been that good on immigration. It took him almost two years to take any action on major immigration issues such as Deferred Action For Childhood Arrivals (DACA), the kritarchs in the immigration courts, and criminal prosecutions of illegal aliens. And most of these he has bungled. DACA is still around, insubordinate kritarchs are openly defying him, and he has stopped prosecuting illegal aliens, with the collapse of his now defunct “Zero Tolerance” policy.

Additionally,  Sessions has been a complete failure on newly-emerged issues—the Deep State and domestic terrorism being at the fore.

After President Trump called out Sessions for his failure to fight the Deep State, Sessions claimed he took control of the Department of Justice (DOJ) from Day 1! [Sessions Rejects Trump, Says He 'Took Control' Of Justice Department From Day One, by Kelly Cohen, The Washington Examiner, August 23, 2018] But this certainly is not true: Deep State Democrats and Never Trumpers ran and continue to run the DOJ from Day One.

For example, Sessions refused to fire immediately all Obama appointees at the DOJ after inauguration of President Trump. Customarily, all United States Attorneys and other political appointees in the DOJ resign before a new President is inaugurated. If they don’t, they are summarily fired by the new Attorney General. But under Jeff Sessions, that did not happen. Holdovers were not fired, but allowed to remain, such as Sally Yates, Deputy Attorney General, Preet Bharara, USA for the Southern District of New York, Rod Rosenstein, former USA for the District of Maryland—subsequently appointed Deputy Attorney General.

Billy Williams, USA for the District of Oregon, and John Huber, USA for the District of Utah, are further examples. You might remember that Yates, a holdover from the Obama Regime, refused to enforce the first travel ban. Bharara’s Deep State subordinates are now prosecuting President Trump’s former personal attorney Michael Cohen. Williams failed to prosecute a local Oregon judge, Monica Herranz, who aided an illegal alien to escape arrest by Deportation Officers from ICE. And Huber is the man responsible for investigating the Democrats in the Deep State actively violating the law and sabotaging the Trump Administration, an investigation that appears to have vanished without trace. Far from controlling the DOJ, Sessions basically turned the DOJ over to Obama holdovers. 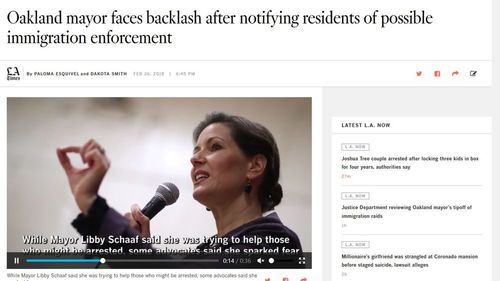 More perniciously, Deep State bureaucrats in the DOJ, Democrats to a man, are allowed to serve—such as Acting U.S. Attorney, Alex Tse, long-time San Francisco Democrat local official. Tse, former top legal official for the City and County of San Francisco, was appointed by Sessions as Acting US Attorney for the Northern District of California, where he has proceeded to quash prosecution of Libby Schaaf, the Mayor of Oakland who famously announced an impending raid in Oakland and the greater San Francisco Bay Area by ICE directed against criminal aliens and other illegals.

Reportedly, Sessions was angered by this flagrant illegality. But his anger must have been for show. We are now almost a year into Libby Schaaf’s crime, yet there has been no indictment or arrest. [Is There a Federal Double Standard When Considering Charges for Obstruction of Justice? By Dan Cadman, CIS.org, June 14, 2018]

It makes one think that Sleepy Jeff is not sleepy, but actively sabotaging the Trump Administration.

I don’t call this failure as being strong on the immigration issue.

Given the emerge of a Totalitarian Left in America, domestic terrorism increasingly matters to legacy Americans. Here there have been two failures:

Antifa operates openly, announcing their intentions in advance and attacking anyone they dislike. A few AntiFa might be arrested by local police, but most charges are quickly dropped.

However, as I argued more than a year ago, the Federal government can easily charge those identified by local arrests with Civil Rights violations. Such cases are open and shut. For example, an Antifa terrorist, Eric Clanton, recently pled guilty after attacking seven pro-Trump Americans with a bike lock during a free speech demonstration in Berkeley that was attacked by Antifa. [Eric Clanton takes 3-year probation deal in Berkeley rally bike lock assault case, By Emilie Raguso, Berkeleyside, August 8, 2018 ]

The locals allowed him to plead to a single misdemeanor with no prison time. A slap on the wrist. But why hasn’t Sessions instructed Alex Tse to charge Eric Clanton with Federal Civil Rights violations?

Consequently, Antifa has increased their terrorism under Sessions. They feel they can safely ignore the DOJ that he controls. So confident are Antifa terrorists that that their Deep State Democrat allies control the DOJ that they are burning Federal subpoenas, taunting Sleepy Jeff to act.

About two dozen protesters with DC’s antifa movement gathered to support antifa-aligned independent journalist Paul ‘Luke’ Kuhn. Kuhn, who identifies as an anarchist, was sent a federal grand jury subpoena demanding “all recorded images, audio and data of protests near the White House, in Washington, D.C. on August 12, 2018, between the hours of 3:30 p.m. and 4:30 p.m., that are contained in a hand-held, Canon, flip-screen camera, with a black hand strap, that you possessed within the District of Columbia on August 12, 2018.”

Kuhn, whose work can be found at dcindymedia.org, stood outside the courthouse as he was originally instructed to appear inside.

“United States District Court federal grand jury, this is what I think of your subpoena,” Kuhn said before lighting a copy on fire…

As the group began to depart, Kuhn received a call from his attorney.

“The subpoena has been withdrawn. They have given up. They have thrown in the towel. We have won. They have lost. Any questions?” Kuhn declared.

So, just as the Sessions DOJ dropped charges against the J20 Inauguration Day Antifa rioters, it is refusing to enforce Federal Grand Jury subpoenas against Antifa terrorists.

The Deep State, under the aegis of Jeff Sessions, is protecting Antifa terrorists in their attempts to intimidate and kill legacy Americans.

This is an issue as existential as immigration. We can either be replaced or murdered, most likely both. But Sessions is doing little about either.

Time for him to resign. If he doesn’t, President Trump should fire him.