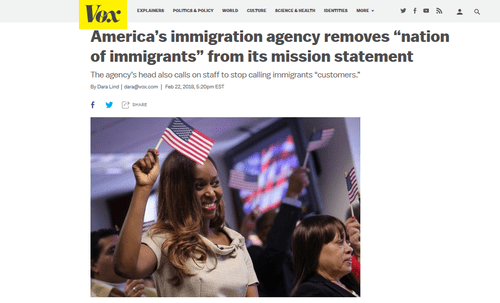 Trump Foes, Friends Fighting It Out At USCIS—Director Cissna Must Weigh In

In April 2016, I warned the then-frontrunner for the GOP presidential nomination, Donald J. Trump, would have foes in the immigration bureaucracy—but also but also friends. Among foes, I identified U.S. Citizenship and Immigration Services (USCIS). And USCIS is now leading #TheResistence, at least in the Department of Homeland Security (DHS). Both sides are now fighting it out. Trump-appointed USCIS Director L. Francis Cissna should weigh in and start punishing Trump’s foes.

Why has this happened? Because top USCIS officials consider themselves customer service for immigrants and illegal aliens.  This is a legacy of the formation of DHS and the separation of the Immigration and Naturalization Service into separate benefits and enforcement components. USCIS handles benefits, while enforcement is handled by the U.S. Customs and Border Protection, the Border Patrol, ICE SVU (as I call it because of its preference for non-immigration enforcement) and ICE Enforcement and Removal Operations. 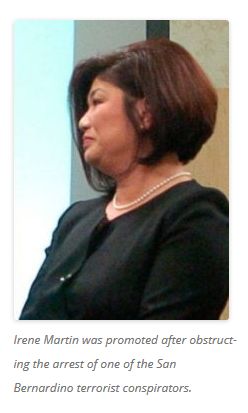 No one more exemplified this resistance to enforcing immigration law than Irene Martin, Field Office Director, USCIS, San Bernardino, CA, who blocked DHS agents from arresting the man who supplied guns to the San Bernardino terrorists.

But USCIS has not disciplined Martin and the superiors who supported her obstruction of justice.

Worse yet, U.S. attorney general Jeff Sessions III has not prosecuted Martin for obstruction and false statements to the inspector general’s office at DHS.

Now USCIS resisters are openly defying President Trump’s senior appointees at the agency. And, of course, the #FakeNews Media is helping. Thus a reporter for the Washington Post apparently colluded with a USCIS employee to create fake news by having that employee attack the new USCIS Director, L. Francis Cissna, about the return to previous rules about immigrants’ using welfare:

The proposed rule appears to have generated consternation among some USCIS employees. At a recent town-hall-style staff meeting, one worker challenged Director L. Francis Cissna, according to a recording of the encounter shared with The Post.

“On a personal level, I think I can say with confidence that my destitute and illiterate great-grandparents would not have been welcomed in this country under something like the very ill-conceived public charge rule that is currently in the process of development,” the staffer said. He told Cissna that such changes were hurting employee morale.

“Given that neither the headquarters nor the policy environment seem likely to change in the next three years, what will you do to maintain and retain, I should say, a motivated and engaged headquarters workforce?” he asked Cissna.

[Trump Proposal Would Penalize Immigrants Who Use Tax Credits And Other Benefits, by Nick Miroff, March 28, 2018].

But nothing could be further from the truth. As I predicted in my article two years ago, line employees of USCIS fully support holding immigrants to the law. Remember that five years ago, rank and file USCIS union employees opposed the Obama Regime’s Administrative Amnesty, much like the unions for the Border Patrol and Immigration and Customs Enforcement [USCIS Union President: Lawmakers Should Oppose Senate Immigration Bill, Support Immigration Service Officers, National Citizenship & Immigration Services Council, May 20, 2013].

USCIS management is the problem. Overwhelmingly, they want to look the other way when it comes to illegal aliens, terrorists, and refugee/immigration fraud.

Fortunately, Director Cissna is trying to change the attitude of senior management at USCIS. His answer to the unhappy underling whose “destitute and illiterate great-grandparents would not have been welcomed in this country” was strong:

“Administrations change. Policies change,” Cissna replied, according to the recording. “I’ve had to implement all sorts of things ... that I didn’t like. But we do our job.”

“I think that we all have to remember we are civil servants, and we all serve the president,” Cissna told his staff. “We’re going to follow his directives.”

Here’s another case of saboteurs working with the MSM to create fake news as part of the #Resistance:

US Citizenship and Immigration Services isn’t for immigrants anymore.

That’s not an exaggeration. USCIS, the federal agency responsible for issuing visas and green cards and for naturalizing immigrants as US citizens, has unveiled a new mission statement that strips out all references to immigrants themselves—including taking out a line that called the US a “nation of immigrants.” And in an email to agency staff Thursday, as first reported by the Intercept’s Ryan Devereaux, director L. Francis Cissna bragged about the change—saying that USCIS wasn’t supposed to help immigrants and the US citizens seeking to sponsor them, but rather “the American people.”

The new mission statement, and Cissna’s justification, downplays the agency’s commitment to helping immigrants become American citizens and plays up the idea that US citizens attempting to bring their family members to the US don’t count as real Americans whose interests deserve to be protected.

This change to the mission statement approximates something I addressed previously in my Blogspot blog, since deleted by Google [Archive.org version] and now here: a new mission statement was needed to orient USCIS as an immigration law enforcement agency. Of course the Voxsplainers and Leftist USCIS bureaucrats object.

Their most strident objection is to close monitoring the of benefits aliens receive. #TheResistence in the MSM and USCIS, persons like Irene Martin, don’t like the idea that senior management might look at the failings of USCIS employees like Irene Martin:

The federal agency that runs the U.S. immigration system is creating an internal division to more rigorously police its own caseworkers, a move possibly aimed at those who may be too lenient with applicants seeking residency or citizenship, according to staffers and internal documents obtained by The Washington Post….

According to the documents, USCIS will establish the Organization of Professional Responsibility to enhance oversight of the way its employees handle the more than 26,000 cases the agency adjudicates daily. The office will have three divisions, including an Investigations Division to “manage the agency’s program that investigates cases involving fraud, waste, abuse or misconduct by USCIS employees,” according to one draft version obtained by The Post.

Let’s not forget what happens when federal “caseworkers” are “too lenient,” as WaPo puts it: welfare for terrorists!

That’s what happened when two al-Qaida operatives—who had attacked U.S. soldiers in Iraq—landed in Bowling Green, Ky., as “refugees.” One of them hit the jackpot:

In 2009, Alwan applied as a refugee and was allowed to move to Bowling Green, where he quit a job he briefly held and moved into public housing on Gordon Ave., across the street from a school bus stop, and collected public assistance payouts.

[Exclusive: US May Have Let 'Dozens' of Terrorists Into Country As Refugees, by James Gordon Meek, Cindy Galli and Brian Ross, ABC News, Nov. 20, 2013].

The Office of Professional Responsibility at USCIS has its work cut out for it. It can start by firing Irene Martin and demanding that Sessions prosecute her for interfering with a criminal investigation and false statements.

But Cissna must go further. In my blog on USCIS reforms, I recommended further action: reinventing USCIS to be an immigration law enforcement agency, returning arrest authority to its employees and giving them uniforms similar to the Border Patrol.

Currently, illegal aliens and fraudsters have nothing to fear from USCIS. If they commit fraud, they are not arrested, merely denied the benefits they fraudulently claimed. There is a positive an incentive to lie and cheat.