The inestimable Sam Francis gave us the concept of anarcho-tyranny: where crime is rampant and protected groups initiate political violence, but the state 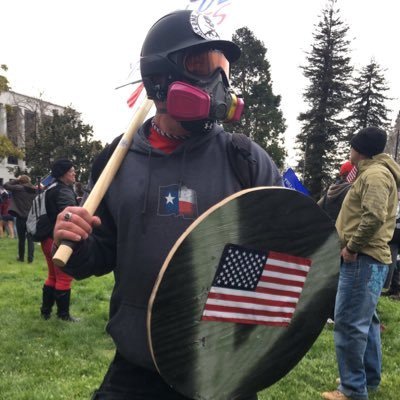 does nothing, instead punishing those who resist—which today means those who voted for President Donald J. Trump.  VDARE.com has been at the forefront documenting post-election manifestations—see here, here, here. As we predicted, the next stage has been reached: in California this weekend, patriots were actually arrested for defending a Trump rally—including the now-famous #BasedStickMan, a.k.a. Kyle Chapman. This is war. It is time for the Trump Administration to act.

On Saturday March 4, supporters of President Trump had a rally at Civic Center Park in Berkeley, CA, part of a nation-wide series of rallies.  But the Left had different plans: deliberate violence to coerce both the American people and President Trump in furtherance of the Leftist political agenda.

The City of Berkeley and the Berkeley Police Department (BPD) were well aware of the pro-Trump demonstration:

The city is preparing for a potential pro-Trump demonstration planned for Saturday at 2 p.m. at Civic Center Park in downtown Berkeley, as well as for a counter-protest that has been called for noon in the same location.

“We’re planning for a number of different contingencies,” said city spokesman Matthai Chakko Friday. Chakko said the expectation was that the pro-Trump event would be a “small gathering of people.”

And Leftist terrorists were open about their plans to bring violence to Civic Center Park:

Meanwhile the Coalition to Defend Affirmative Action, Integration and Immigrant Rights and Fight for Equality By Any Means Necessary (BAMN) — has announced a counter-protest to the pro-Trump demo, stating its purpose is to “confront and defeat the Trump movement” with “no platform for fascists and white supremacists.” A focus of the action, the group says, is to defend Berkeley’s sanctuary city status.

BAMN openly bragged on its website about its previous violence and publicly promised more terrorism:

UC-Berkeley students and community members won a tremendous victory against President Trump and his proto-fascist movement on February 1 by shutting down white supremacist, Breitbart News Editor and demagogue Milo Yiannopoulos. Thousands of people mobilized in defense of immigrant and Muslim students, against racism, sexism, and homophobia, and stood united at Sproul Plaza chanting “Shut it down!” The protest took effective and prompt mass action that stopped Yiannopoulos’ racist-recruitment event from going forward...

All out on March 4th! Confront and defeat the Trump movement! No platform for fascists and white supremacists!

And the BPD planned to ignore the terrorists and allow, again, attacks against innocent people. From the Berkeleyside report: 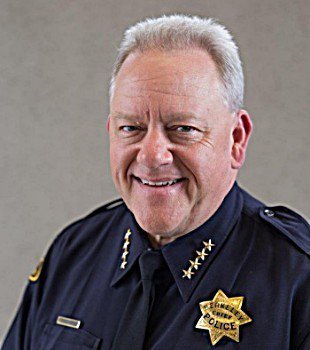 While the police say they are preparing for any potential problems Saturday, they cannot say precisely what those preparations involve, including how many officers might be mobilized. At the Yiannopoulos demonstration both BPD and UCPD kept their distance and only one arrest was made. Afterwards both agencies were criticized for what was perceived by many commentators as too hands-off a response. BPD Chief Andrew Greenwood said the department’s approach had been informed by the East Bay Black Lives Matters protests of 2014. “Placing police officers into a potentially volatile crowd situation could have prompted a focused, sustained violent attack on police, thereby rapidly escalating the risk of harm to all involved,” he wrote in a two-page memo to Berkeley City Manager Dee Williams-Ridley about the Yiannopoulos protest. [Link in original]

However, when evil is about the land, a hero sometimes arises, and the hero that day in Berkeley was #BasedStickMan, Kyle Chapman. Chapman and a small group of like-minded patriots arrived prepared for the attacks by communist thugs.  And this small group of modern Spartans broke the terrorist attack:

In response to violence they knew was coming, Chief Greenwood and the BPD were on the sidelines most of the day, allowing the problem to grow instead of using ruthless coercion at the first sign.

At around 12:30 p.m. about 20 police officers arrived and took up positions on the south side of the park and on the elevated section next to the Peace Wall. Armed with batons, as well as at least one video camera, they at first observed from a distance. A handful of officers were stationed at the entrance to downtown Berkeley BART station from around noon.

And, yes, Democrat elected officials were on hand to direct the violence:

At first, the BAMN group was congregated on the west side of the park and it kickstarted proceedings with controversial BUSD teacher Yvette Felarca making a speech through a megaphone...

Berkeley City Councilman Ben Bartlett was at the protest, and State Senator Nancy Skinner was there for a time too. [Link in original].

Even though #BasedStickMan was acting in self-defense and that of others, fending off a terrorist attack, he was shamefully arrested by the BPD, who for the most part ignored attacks on themselves and others by the Democrat-organized terrorists. From Berkleyside:

Throughout the main protest at the park, from midday to around 5 p.m., there were no helicopters overhead. Around 5 p.m. when only a few stragglers, most of whom seemed to be either Antifa or BAMN related, remained, a red helicopter did begin to hover over the park. Protesters, some of whom were wearing all black and wearing bandanas, were goading the police and some threw eggs. Several arrests were made.

However, Berkelyside’s photos of the weapons seized showed that those arrested were the modern-day Spartans who were acting in self-defense.  Antifa and Black Block don’t put American flags on their weapons: 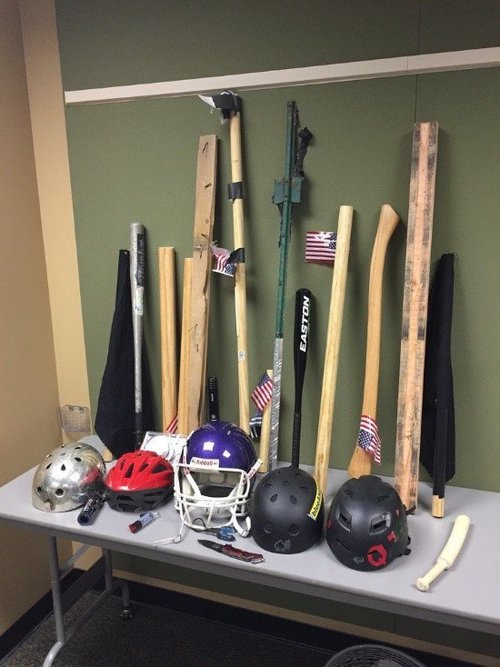 The Democrat Party and their minions, AntiFa, the Black Block, and Black Lives Matter, have organized deliberate violence to further their political ends, and are using State Power as part of that conspiracy.  These actions are the very definition of terrorism.

The Federal government provides two succinct mutually supportive definitions of terrorism, in both statute and regulations:

(3) the term “terrorist group” means any group practicing, or which has significant subgroups which practice, international terrorism;

And the official definition of terrorism from Title 28 Code of Federal Regulations, Chapter 0.85:

Terrorism includes the unlawful use of force and violence against persons or property to intimidate or coerce a government, the civilian population, or any segment thereof, in furtherance of political or social objectives.

#BasedStickGuy and others were acting in self-defense, so their arrest was prohibited by California statute.

For self-defense to be a legal defense, you need to have:

Clearly, all these conditions were met.

It is now time for Attorney General Jefferson Beauregard Sessions III to stand up and be counted.  The terrorist rioting by Yvette Felarca, BAMN, Black Block, and Antifa is being protected and encouraged by Democrat Party office holders and enabled by local government bureaucrats, including Chief Greenwood and Chief Margo Bennett, University of California Berkeley Police Chief. This is in violation of Federal civil rights laws, including Title 18 United States Code (USC) § 242 - Deprivation of Rights Under Color Of Law, Title 18 USC § 241 - Conspiracy Against Rights, Title 18 USC § 2101 - Riots, and Title 42 USC § 1985 - Conspiracy To Interfere With Civil Rights.