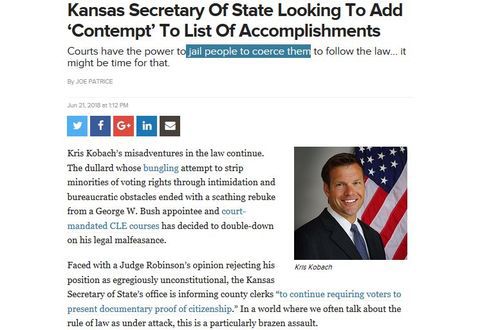 Above the Law writer Joe Patrice is calling for the jailing of Kris Kobach, the Kansas secretary of state. [Kansas Secretary Of State Looking To Add ‘Contempt’ To List Of Accomplishments | Courts have the power to jail people to coerce them to follow the law... it might be time for that, By Joe Patrice, Jun 21, 2018]' 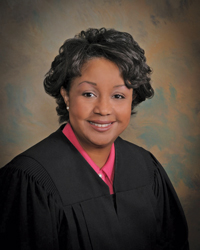 Kobach has been found in contempt by federal judge Julie Robinson (right) because he "failed to ensure that voter registration applications covered by the preliminary injunction order became fully registered."'

Robinson, a Bush appointee, sided with the ACLU and is now hammering Kobach personally.  Patrice wants to see him in jail.

I fully endorse the idea.

Kobach is the open borders lobby's worst nightmare:  handsome, energetic, family man, a degree from three different Ivies or something mind-boggling like that.  It's why the SPLC has put him in their crosshairs.

He's grossly underemployed as the Kansas Secretary of State, and I agree with Ann Coulter that Trump should put this guy somewhere more powerful than a voting fraud commission.  If he doesn't go soft, I expect to see more from him.

So, putting him in jail, like America's answer to Tommy Robinson, is a spectacular idea.  If her honor would do those honors, it would bring national attention to both the ridiculousness of the ACLU's suit and the willingness of our system to jail immigration patriots.