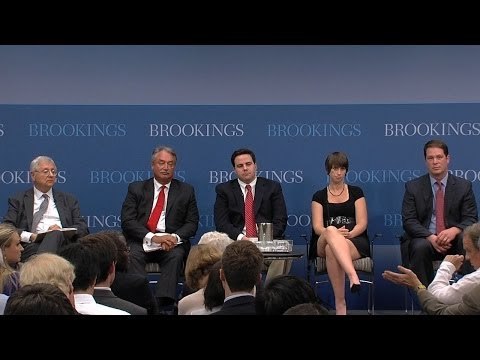 Will Hispanics And Asians Really Prefer The "Black Party" To The "White Party"?

While the rest of the country was still up in arms over the George Zimmerman verdict, I watched a webinar from the Brookings Institution on The Future of the Republican Party: Is the GOP DOA? It wasn’t the most scintillating debate, but it did give some insight into how influential Republicans think—and what they don’t think about.

Zimmerman’s ordeal demonstrated once again the centrality of race and ethnicity in American political passions. But three of the four discussants—Elaine Kamarck,  William A. Galston, and  Alex Castellanos—played down the topic.

You might think that the violent, mindless rage directed by Democrats at Zimmerman as the face of white racism (despite his being Hispanic) might get Republicans thinking about how to exploit the inherent cracks in the Obama Coalition. But the idea seems never to have occurred to the participants.

The Brookings confab was mostly of interest because it offered a look the one speaker who did discuss race: at Sean Trende, the RealClearPolitics election data cruncher. Trende has a chance to evolve into the Nate Silver of the Right. He is a lucid speaker and a handsome fellow in a James Spader-sort of way, so he should get numerous opportunities to inject some reality checks into Republican thinking.

Trende’s recent four-part series on The Case of the Missing White Voters, Revisited basically introduced the Main Stream Media—at long last!—to the existence of the white voter. Trende is properly skeptical of the conventional wisdom, offered by such disinterested well-wishers of the GOP as Barack Obama, Charles Schumer, and Nancy Pelosi, that the House GOP must grant amnesty to illegal aliens now or never win another Presidential election.

In contrast, Trende noted that white turnout was weak in 2012. In particular, at the county level, total turnout tended to be limpest in counties where Ross Perot did best in 1992.

Perot, who turned in the strongest Third Party run since Teddy Roosevelt, ran strongest in regions somewhat distinct from the GOP’s current Southern and evangelical strongholds. The renegade billionaire appealed most to patriotic populists, the kind of more downscale white voters who were distinctly ungalvanized by Mitt Romney’s corporate executive style (Trende: “Romney got killed on ‘Who cares about people like me?’”) and by Paul Ryan’s budget wonkery.

As a thought experiment demonstrating “there are multiple ways to skin an electoral cat,” Trende pointed out three things the GOP could have done to get to fifty percent plus one of the popular vote in 2012:

Trende is perfectly willing to admit that “30-40 years from now, it’s a different story”—mass immigration will have totally sunk the GOP, at least as we know it today. But the short-term numbers hardly suggest that the Republicans’ only hope to get out of the hole that post-1965 immigration policy has put them in is to dig faster.

Granted, the MSM failure to check the dubious math in their stories on how Senator Schumer is saving the Republican Party is more understandable than their getting the Trayvon tale so embarrassingly wrong. That was the kind of sad incident that happens all the time in every metropolitan region in America. It just needed meat and potatoes reporting to figure what really happened. But, instead, the MSM, after its long disinformation campaign, has found itself humiliated by the trial: yet another fiasco involving blacks.

Still, it’s worth asking: why couldn’t the MSM keep in their heads a simple distinction about the impact of immigration—

Answer: Because thinking is hard, especially about reality.

Thus for the last 8 months we’ve been hearing almost nonstop about how for GOP House not to pass the Schumer-Rubio bill would incur the Righteous Racial Wrath of Hispanics. The pervasive but seldom-articulated assumption among journalists: Hispanic voters are a cohesive group who are obsessed with helping their co-ethnics, due to their intense Pan-Hispanic devotion to Racial Solidarity.

After all, aren’t Hispanics the New Blacks?

Well, it’s true that, as we’ve seen in the Trayvon controversy, African-Americans tend to be highly racialist. That doesn’t mean they always treat each other well, unfortunately— by, say, not shooting each other. But, clearly, they welcome chances to express verbally their racial solidarity—which also provides career benefits for a not-insignificant stratum of the more articulate blacks.

For example, the Rev. Al Sharpton still really is a Black Leader. He successfully played the same agitator role in the Trayvon tragedy as he did in the fictional Henry Lamb death under the name Rev. Bacon in Bonfire of the Vanities 26 years ago.

However, there’s a reason that this “Hispanic Is the New Black” assumption rarely gets aired explicitly: blacks are still the old black. They aren’t in any hurry (except for the most tactical of reasons) to share the moral mantle of America’s Designated Victim Group with Hispanics like, say, George Zimmerman.

But are African-Americans the best model for understanding people from Spanish-speaking countries?

For example, over the last 15 months, how many Hispanic leaders have stood up in the defense of the half-Peruvian Zimmerman? Not many.

The only honorable exception I’ve noticed: veteran tabloid TV host Geraldo Rivera. He has taken a lot of flack over the last 15 months for being a voice of moderation against the railroading of Zimmerman.

But even that lone example raises the question: Is Geraldo really a Latino Leader? Does he even claim to be? (Occasionally, he talks about retiring to his house in Israel and running for the Knesset.)

But if Geraldo, who at least is famous, isn’t a Latino Leader, then who is?

Well, there’s that Univision anchorman from Mexico City who looks like Anderson Cooper would after getting burnished on a rotary lathe to a gleaming sheen. And there’s that guy who gets paid $3,000 per year to hold the ceremonial office of mayor of San Antonio and who the Democrats had give the keynote speech at their last convention. And there is the ex-mayor of Los Angeles, who is kind of an overgrown juvenile delinquent. Also, the press seems to want to anoint that Desperate Housewives actress as the new Marta Luther King.

But it all seems very tenuous. In fact, a 2010 Pew Hispanic Center poll found that 74% of Latinos responded that their most important ethnic leader was either “Don’t know” or “No one.”

The Zimmerman case is more evidence that most of today’s professional Hispanic activists are transparently just in it for their own careers. The Establishment didn’t want anybody standing up for Zimmerman. So no Latino Leader younger than the 70-year-old Geraldo would.

The main examples of Latino Leadership noticeable over the last decade: the huge rallies of illegal aliens on May Day 2006. Who sounded the clarion call for those? Probably funny drive-time Spanish-language DJs, but nobody seems to remember.

Indeed, there’s not much evidence that the Hispanic masses cared one way or another about Zimmerman. The argument only seemed to concern blacks and, as always, two sets of white people getting very angry at each other.

In my experience, Hispanics are rather adept at not caring about a lot of things that seem important to white people at any one time.

The reality: it’s whites have dreamt up the notion of Latino Solidarity.

Sure, the diversity gravy train does provides an easy career for a few well-educated folks with Spanish surnames.

For instance, at the Brookings webinar one panelist was Alex Castellanos, the Cuban-born ad man who created the endlessly denounced Anti-Affirmative action “White Hands” commercial that helped Jesse Helms win re-election in 1990. But now Alex is beyond all that, reinventing himself as a Tom Friedman-like seer who recommends books on complexity theory by the Santa Fe Institute and on governing via the Internet by San Francisco mayor Gavin Newsom.

And Castellanos isn’t totally loath to get in on the ongoing Cuban putsch within the GOP by playing the victim card himself. At Brookings, he claimed: “We’re in a party where I have to carry my passport in my pocket to prove my citizenship.”

But immigrants from Latin America and their descendants don’t really care about this vast synthetic concoction of “Hispanicity.” In the World Cup, for instance, they root for the national soccer teams from their homelands.

Poor Zimmerman’s mom was from Peru, but who cares about Peruvian-Americans? Apparently, Mexican-Americans don’t.

Similarly, since November, the MSM has been proclaiming Cuban-American Marco Rubio the savior of the Republican Party in 2016 because of his immense appeal to Latino voters. Except that the most recent poll by Latino Decisions of 1200 Latino voters found Rubio losing to Hillary Clinton 66-28 and to Joe Biden 60-28.

On the other hand, Rubio does have a cute British Invasion boy band look, so at least he’s got that going for him.

Latin Americans like looking white. They put expensive effort into it, cosmetically and genetically, and they pay a lot of money to their idols for looking white.

In contrast to Rubio or the glistening Jorge Ramos, Zimmerman is, visibly, some kind of pudgy tri-racial pardo.

The bottom line: while numerous elite white Americans have been going on TV to announce, like Kent Brockman on The Simpsons, “I, for one, welcome our new electoral overlords,” the truth is that Hispanic immigrants are just not formidable people, individually or (especially) collectively.

And that hints at the 30-40 year solution for the GOP’s massive demographic problem. (Assuming, of course, that the party elite absolutely refuses to allow an immigration moratorium).

If Americans whites started treating themselves with self-respect (e.g., don’t roll over for illegal aliens with fifth-grade educations), the Latinos would more or less fall in line as they tried to be white in an American where whiteness is no longer demonized.

Sean Trende told Brookings that the GOP might get up to 20 percent of the black vote someday. To me, that seems both implausible and unwise. The natural sweep of American politics is from blacks on the Left to, say, Mormons on the conservative side. In 2012, for instance, Romney got 3 percent of the black vote and 86 percent of the Mormon vote. (Of course, that gap was exaggerated by the identities of the two candidates last November, but it’s still characteristic).

Instead, my suggestion: rather than devote immense effort to pursuing a tiny number of persuadable black voters, Republicans would be smarter to concede that the Democrats are the natural home of blacks … and that blacks, as historic Americans, deserve to have a major party defer to them!

Indeed, just as Republicans are constantly demonized as the “White Party,” they should praise the Democrats for being the natural "Black Party"—the rightful vehicle for African American political aspirations, since blacks are the moral core of the Democrats.

As I wrote in wrote in 2009, before anybody had heard of Trayvon Martin:

Moreover, Republican rhetoric should encourage feelings of proprietariness among blacks toward their Democratic Party. It's not all that hard to get blacks to feel that they morally deserve something, such as, for example, predominance in the Democratic Party. African-Americans are good at feeling that others owe them deference.

When that reality is made clear, white Democratic grandees like Harry Reid and Chuck Schumer might be very surprised by what happens to their Rainbow Coalition.

Steve Sailer (email him) is movie critic for The American Conservative and writes regularly for Takimag. His website www.iSteve.blogspot.com features his daily blog. His book, AMERICA’S HALF-BLOOD PRINCE: BARACK OBAMA’S "STORY OF RACE AND INHERITANCE", is available here and here (Kindle)