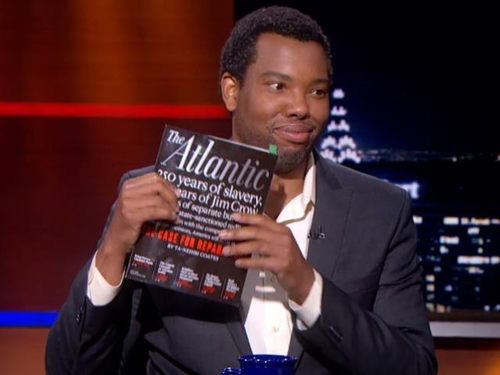 The Enduring Myth of Black Criminality

Video by The Atlantic

In his upcoming October cover story, Ta-Nehisi Coates explores how mass incarceration has affected African American families. “There’s a long history in this country of dealing with problems in the African American community through the criminal justice system,” he says in this animated interview. “The enduring view of African Americans in this country is as a race of people who are prone to criminality.” You can read the full story on September 15, 2015.

So you can’t yet read TNC’s blockbuster article about “The Enduring Myth of Black Criminality,” but you can salve your impatience by listening to TNC talk about his next effusion here.

Meanwhile, from The New Republic:

… A new generation had come onto the scene, with pedigrees that didn’t include terminal degrees, but who were driving the conversation nonetheless. Between the World and Me, which currently holds the second spot on the Times’ nonfiction best-seller list, was written not by a professor but a young black thinker who did not graduate from college: Ta-Nehisi Coates. Coates established his reputation not in scholarly publications but through popular blog posts and articles for The Atlantic.

Along with Coates, a cohort of what I would like to call the “black digital intelligentsia” has emerged. They wrestle with ideas, stake out political territory, and lead, very much in the same way that my generation did, only without needing, or necessarily wanting, a home in the Ivy League—and by making their name online.

The only problem for blacks with having TNC as the face of your New Black Intelligentsia, however, is that TNC obviously isn’t exceptionally intelligent.
[Comment at Unz.com.]