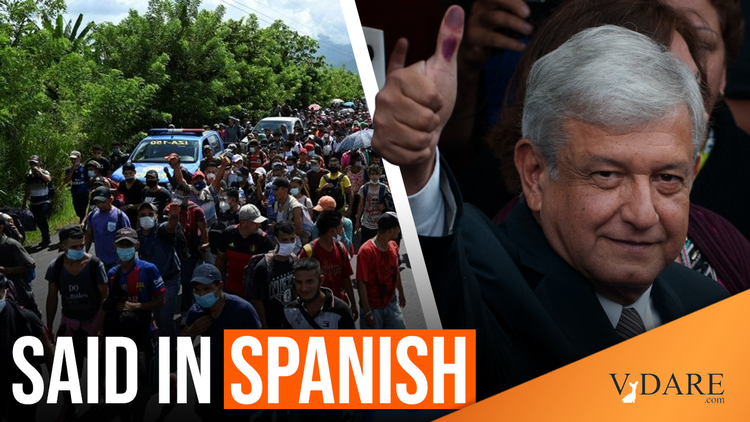 President Trump has received too little credit for the hard-nosed policies that have persuaded Mexico and some Central American countries to stop illegal aliens down there before they reach our border. In March, for instance, in response to the Chinese Virus, he ordered the immediate deportation of apprehended illegals.

On October 30,  another “migrant” caravan was launched in Honduras, with hopes of marching to the United States.  On October 1, about  4,000 caravanners simply crashed the border into Guatemala.   But within a few days,  Guatemalan authorities stopped it.    The migrants were mostly Hondurans, with smaller groups of other nationalities [Una nueva caravana de migrantes sale de Honduras rumbo a EEUU en medio de la pandemia (“A new caravan of migrants leaves Honduras for the US amid the pandemic”), Univision, October 1, 2020].

Even the deputy foreign minister of Honduras, Nelly Jerez,

…advised her fellow Hondurans that the chances of a caravan entering the United States were ‘null’ and called on them not to expose themselves to the pandemic and the growing ‘xenophobia’ in Guatemala and Mexico.

The caravan was travelling across Guatemala in at least three groups. By October 2, some had turned back to Honduras. Others fought back by throwing sticks, stones, and Molotov cocktails at Guatemalan security forces.

By October 3,  Guatemala had detained several thousand migrants in the vast and sparsely inhabited Guatemalan department of Peten:

Hunger and a wall of soldiers ended this Saturday [October 3] the American dream of at least 2,000 Hondurans who crossed Guatemala in search of arriving in a caravan to the United States, while other Hondurans resisted surrender.

Remaining migrants were on their way to Mexico, albeit in smaller groups.

Mexican authorities reinforced the border with Guatemala.  On October 5, Mexico’s Milenio reported that “migratory, police and military authorities of Guatemala stopped and broke up the caravan of migrants on its territory” [Tras desarticulación de caravana migrante, frontera de México vuelve a normalidad (“After Breakup of Migrant Caravan, Border of Mexico Returns to Normal”), by Julio Navarro].

Summary: Guatemalan security forces stopped the caravan and sent the Hondurans back home where they belong.

Granted, small groups of illegals are wandering the jungles of Guatemala and eastern Mexico, but they will probably soon be captured or surrender.

Trump actually has a pattern of small immigration triumphs, achieved by executive action. But why should the Main Stream Media report them when he himself is not mentioning them in his re-election campaign?

Question: What happens if Joe Biden wins in November? Will he pressure Mexico and Central America to stop the caravans?

AMLO Says The Caravan Was Organized To Sway U.S. Election

“It’s very strange that this caravan departs on the eve of the U.S. election… And how is it that in Honduras…. this group is permitted to organize? … [I] think it has to do with the U.S. election…. there are indications that it was organized with this purpose. I don’t know who benefits from it.”

But here’s something even more interesting, at least for Americans who care about the integrity of the election on Nov. 3. Noting that “migration nor Mexico have been topics of debate,” AMLO said his county’s interference in our election has stopped.

“We have made every effort not to involve our country in the campaigns or the U.S. campaign and this is a big difference from the last election,” he said.

Thus, AMLO confessed that his country—before he took office and stopped it—meddled in the 2016 election when his predecessor’s regime tried to get Mexicans to vote against Trump.

Better yet, AMLO offered kind get-well wishes for Trump and FLOTUS to beat the Chinese Virus:

And let me take advantage of the opportunity to wish the President of the United States and his wife a speedy recovery, because he is infected, he tested positive for COVID and we wish for him and his wife to recover quickly.

But that’s hardly a surprise. As I have reported often in the past, he has carefully cultivated good relations with President Trump and refused to criticize him.

Telemundo probably wasn’t expecting this bad news. The Spanish-language network polled viewers and asked who won the presidential debate on September 29. By a 66-34 margin, they responded that Trump won.

Telemundo hostess Felicidad Aveleyra hastened to point out that it wasn’t a scientific poll, but still ...

As for the recent Vice-Presidential debate, Telemundo decided to just throw out the results when they got the wrong answer:

Mexicans “Defrauded” In Birth Tourism Scam. The Real Victims Are The U.S. Taxpayers.

Here’s a laugh if there ever was one: Univision thinks that that Mexicans who come to in the U.S. to have Anchor Babies are the real victims of birth-tourism conmen, not Americans in general or taxpayers in particular:

This weekend [US] federal agents arrested a couple who supposedly defrauded various Mexican tourists, who paid thousands of dollars for a phony medical insurance policy that promised to help them have their children born in California hospitals without having migratory problems, but guaranteeing American citizenship to their children. In reality, they were enrolled in a government program that gives assistance to low income pregnant women.

The government program is the Medi-Cal Access Program, which receives federal funds.

Alvarez and Olmos “submitted hundreds of applications and financial documentation and false employment,” and from 2016 to their arrest on September 23, they defrauded MCAP of $1.6 million.

That doesn’t include, of course, the money the birth tourists paid.

The scammers, Melissa Alvarez Torres and Jose Luis Olmos Hernandez, have dual surnames, which suggests they were born in Mexico or another Latin American country.

Residing in San Diego County near the border, the couple set up a company called Seguros Americanos Embarazo (American Pregnancy Insurance), “attracting various Mexican women with tourist and work visas who were interested in their babies having the coveted American citizenship.”

Univision also reported that “President Trump has promised to eradicate” birth tourism, and “has even questioned the right of every person born in this country to be a citizen.”

Of course, Univision linked to the $PLC’s page about CIS, which in turn connects CIS to VDARE because of hyperlinks in CIS news bulletins.)

Pregnant Woman Tries To Swim Across The Rio Grande

Speaking of anchor babies, Mexican immigration authorities stopped one such prospective mother unwisely trying to swim the Rio Grande. She and her male partner were swimming across the river, couldn't make and grabbed on to a pillar supporting a border bridge.

Elements of Beta Group of the INM (Mexican immigration agency) in Piedras Negras, Coahuila [across from Eagle Pass, Texas] rescued two migrants, a man and an eight-month pregnant woman who attempted to cross to the United States through the Rio Grande.

[Mujer a punto de dar a luz intenta cruzar el Río Bravo para llegar a EU (“Woman On The Point Of Giving Birth Attempts to Cross the Rio Grande to Arrive to the U.S.”), by Alma Gudino, Excelsior, September 28, 2020]

Cubans Pay To Be Smuggled To Florida, Wind Up In Mexico Instead

La Opinion, the largest Spanish-language newspaper in the U.S., recently reminded readers that human smugglers are dangerous, violent, murderous criminals, not the benevolent “migrant activists,” the leftist Mainstream Media would have us believe:

Two Latino men accused of participating in a people-trafficking network appeared this Wednesday in a federal court in south Florida. The network kidnapped and tortured Cuban immigrants. Reynaldo Marquez Crespo, 41, and Jancer Sergio Ramos Valdes, 33, deceived their victims, leading them to believe that they would take them from Cuba to the United States without authorization. But really, they took them in a boat to Merida, in Mexico, according to the charge.

Once in Mexico, the accused kidnapped the victims and demanded a family contact who would be willing to pay 10,000 dollars for their ransom. Marquez and Ramos extorted the relatives—many in Miami or south Florida—so the money would arrive. … The kidnapped relatives of those who paid the ransom were freed and sent to the Mexico-U.S. border, where they were told to request asylum. The rest were beaten, and received electroshocks, and threats from knife and pistol.