In its obsessive, almost psychopathic, way, the Southern Poverty Law Center, trying to blame the Center For Immigration Studies for "racism", "white nationalism" and so on, has searched the CIS's weekly information emails for links (literally links, it's a news feed) to...VDARE.com[!]:

The SPLC decided to conduct a more thorough investigation into CIS’s weekly immigration commentary email roundup, with the help of the civil rights group Center for New Community (CNC). Our findings reveal that on far more than a few occasions CIS has circulated materials from white nationalists and anti-Semites, prominent racist thinkers whose “crank” status is well known (in many cases for decades)...

SPLC and CNC examined approximately 450 of CIS’s weekly emails dating back almost 10 years and found that CIS circulated over 1,700 articles from VDARE.com, an average of over three VDARE articles in every weekly immigration roundup it sends out. More Than An Occasional Crank: 2,012 Times the Center for Immigration Studies Circulated White Nationalist Content by Stephen Piggott and Alex Amend, May 23, 2017 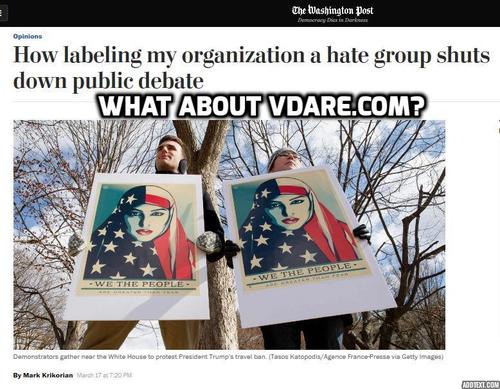 The "crank" thing refers to the fact that Mark Krikorian tried (typically) to triangulate, or distance himself, from Dissident Right figures by saying in the Washington Post that "CIS’s weekly email roundup of immigration commentary (from all sides) has occasionally included pieces by writers who turned out to be cranks" as I noted in CIS’ Mark Krikorian Triangulates Against VDARE.com Without Naming Us.

The SPLC insists on naming us—but not linking to us.

SPLC and CNC examined approximately 450 of CIS’s weekly emails dating back almost 10 years and found that CIS circulated over 1,700 articles from VDARE.com, an average of over three VDARE articles in every weekly immigration roundup it sends out.

VDARE is a blatantly racist website and a hub for white nationalists and anti-Semites who are opposed to non-white immigration. VDARE’s founder is Peter Brimelow, one of the high priests of the “Alt-Right,” the latest rebranding of white nationalism. Krikorian is quite familiar with Brimelow, and wrote a review of Brimelow’s infamous anti-immigrant book Alien Nation, calling it a “flawed jewel.” CIS also published Brimelow in a 1998 colloquy titled “What , Then, Is the American, This New Man?”

In total, CIS has circulated 51 articles penned by Brimelow, the majority of them republished from VDARE.

A further 27 were authored by John Derbyshire, a white nationalist Brimelow hired after the former was fired by the National Review in one of the magazine’s periodic purgings of racist contributors for a screed he wrote titled, “The Talk: Non-Black Version.” The article included lines like, “A small cohort of blacks — in my experience, around five percent — is ferociously hostile to whites and will go to great lengths to inconvenience or harm us,” as well as handy tips like, “If planning a trip to a beach or amusement park at some date, find out whether it is likely to be swamped with blacks on that date.”

You'll see, above, if you click on the links, that they haven't linked to us, Peter Brimelow, or John Derbyshire, but to their own hate-filled screeds against us. They haven't even linked to Derbyshire's TakiMag article.

It's the whole psychopathic shunning thing. Their attempt to blame Krikorian (who they do link to) for his 1995 "Flawed Jewel" review of Alien Nation ignores the fact that he was sort of triangulating even then ("[Brimelow]  sees American nationality in excessively ethnic and racial terms.")

They also ignore the fact that 1995 was not the Current Year. In 1989, SPLC founder Morris Dees was declaring the Confederate Flag part of his heritage, in 1993 MediaMatters honcho David Brock was a closeted gay Republican writing attacks on Anita Hill, there were two Democratic white Southerners in the White House, and one of them—Bill Clinton, a prize triangulator himself—appointed the Jordan Commission on immigration, which came to much the same conclusions about immigration as we do.

But the two basic problems with the $PLC approach are

A: Blaming CIS for spreading our news and analysis (we don't have the resources of the New York Times, but we frequently have things they don't report.)

B: Expecting CIS and Krikorian to have looked into the future to know that someday the SPLC would be naming Brimelow (and us) as hate groups.

Nevertheless, the bottom line once again: triangulation doesn't work—Cultural Marxism marches on, and eventually they'll come for anybody who believes that there are only two sexes—or anybody who doesn't think illegal immigration is a civil right.