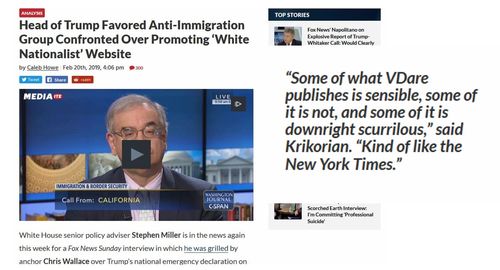 Another Guilt-By-No-Association Smear On Krikorian And CIS, For "Promoting" (Linking To) VDARE.com

Mark Krikorian and the mild-mannered Center for Immigration Studies are under attack again for "promoting" us, I. E. reporting in their roundup of immigration news and opinion what we're saying. I like this pullquote from the Mediaite report, because I know how it will annoy the New York Times:

“Some of what VDare publishes is sensible, some of it is not, and some of it is downright scurrilous,” said Krikorian. “Kind of like the New York Times.”

Unlike the New York Times, VDARE.com is not  largely owned by a Mexican billionaire, has never had  members of the Southern Poverty Law Center (the Alabama hate group ultimately responsible for this atttack) on its editorial board, and has no history of collusion with Russia.

The SPLC went to the trouble of counting the 2012 times we appeared in CIS's email newsletter, which shows that they have too much time on their hands. Krikorian deserves credit for not a backing down, and repeating that line about the New York Times. I could probably prove that the New York Times was a hate group in court, just on their published record.

This Mediaite starts with a caller identifying " as an independent" on C-SPAN’s Washington Journal:

“I was just wondering,” she said. “I get your newsletter, I was wondering why you continue to have VDARE, a white nationalists and anti-Semitic website on your newsletter that you circulate?”

Krikorian replied by offering, as an example of balance, that while they do include some potentially objectionable content, they also, they also include the New York Times.

“We send out a weekly roundup of immigration commentary from all sides, including people we don’t agree with,” said Krikorian. “I mean I include the New York Times, and their editorials on immigration are usually things we completely disagree with, and we include a pretty broad range, including some sites that publish other material that frankly I find kind of objectionable.”

“But if they are important sites of immigration news, we include them because the whole point is, see the broad spectrum of views and judge for yourself,” he said.

So Mediaite did a big followup interview with lots of pointing and spluttering.

But the pointing does not include a single link to VDARE.com. The stories are Lance Welton’s Perhaps Surprisingly, Indians REALLY Aren’t That Intelligent (On Average) and Patrick Cleburne's One Problem With These Hispanic Immigrants Is Their Disgusting Behavior,(which deals with Latino littering, by the way.) The MSM principle is that if immigrants do something disgusting, ignore it, and if there are group differences in IQ, suppress them.

But there's also the "Ransom Note Racism" effect—if anyone has ever said anything controversial, quote them out of context, and then attack anyone else who quotes them. The MSM is weird.