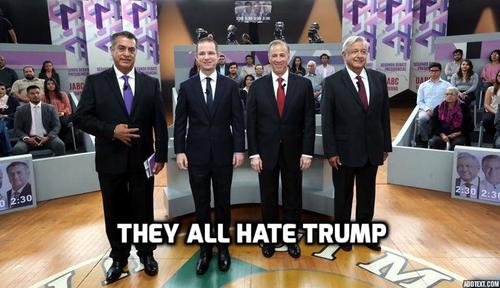 Mexico is in the thick of a presidential election, with voting scheduled for July 1. The four candidates and two moderators debated “Mexico and the World” in Tijuana, across the border from San Diego, on May 20. “Bash Trump Night” would have been a better title—Or “Mexico Must Meddle More In U.S. Politics!” Unlike Russia, they don’t even attempt to hide it.

The four candidates, in descending order vis-a-vis their positions in the polls.

Here’s a group photo right before the debate, left to right: Bronco, Anaya, Meade and AMLO. 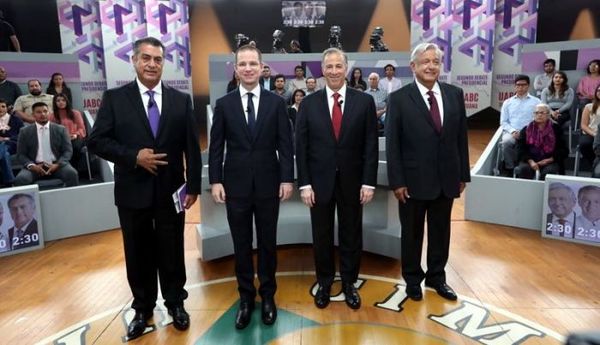 And  here's  a photo of the the two moderators, Leon Krauze and Yuriria Sierra, who had plenty to say—not just ask— as well. 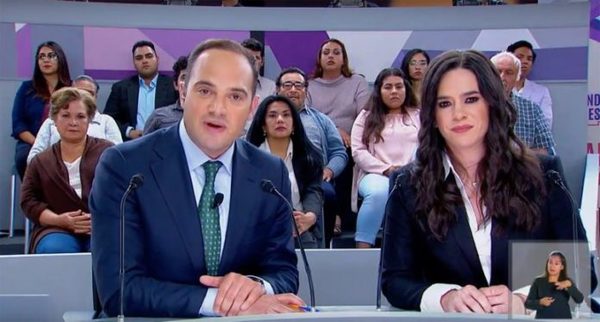 Yes, they are pretty white, aren’t they? And Krauze, the son of Trump-bashing elitist Mexican intellectual Enrique Krauze, resides in Los Angeles, where he is anchorman on a Univision station.

I watched the debate, then extracted and translated the relevant quotes, noting the time where each appears [Segundo Debate Presidencial (Second Presidential Debate), Univision Noticias, May 20, 2018].

Bottom line: All the candidates displayed how Mexican politicians think about the U.S. and about Mexican immigrants here—they have contempt for our sovereignty, demand Open Borders, and think Mexicans in the U.S. owe allegiance to them.

No wonder they bash Trump. He threatens their agenda

Everyone in the Trump administration and Congress should read this. It’s much more important than the hullabaloo about Russian meddling, real and imagined.

Trump’s recent “animals” remark, referring to MS-13, was mentioned thrice in the debate. The Mexican media did actually provide the proper context for what Trump said. But the candidates couldn’t be bothered with the facts. Candidate Meade referred to the Trump administration as “a government, as we saw yesterday, that was capable of calling migrants animals” (24:38). 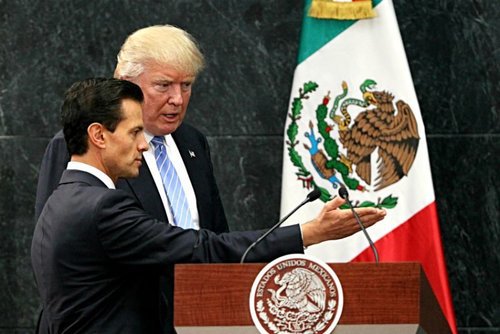 Mexican politicians are still bellyaching about Candidate Trump’s visit to Mexico on Aug. 31, 2016.

Anaya used the visit to attack the ruling party:

Apparently the actual rapes and murders committed by immigrants aren’t insulting and humiliating.

Wait a minute! “Our community in the United States?” Haven’t we been told that DREAMers dream of being Americans?

Or are they really a Fifth Column?

MEADE: I DIDN’T THINK HE WAS GOING TO WIN

Candidate Meade was foreign minister when Trump began his candidacy, secretary of Social Development when Candidate Trump visited, and secretary of Finance and Public Credit when Trump won the presidency. So he’s sort of guilty by association for allowing Trump to win.

Moderator Krauze asked if Meade should have been firmer with Trump. Answered Meade: “I didn’t think he was going to win.…I thought it was not possible for him to win” (24:38).

LOL! You and the American political Establishment, Señor Meade!

MEXICAN “SLAVES” IN THE U.S.

Meade on Mexican migrants in the U.S.: “Each state treats them differently. In some cases, it’s almost slavery for the Mexican migrant. And in others we have made important advances. We also have to close that gap between the Mexican who is now treated as a slave and who needs our defense and the one who has better” (1:27).

My emphasis. So Mexicans are treated as slaves in some states, and in others have it better—thanks to the Mexican government!

Meaning what? Actually, justice would be deportation. 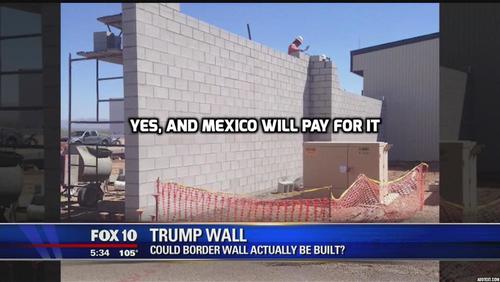 Anaya: “What do they [Americans] do to avoid weapons getting here and people dying? 200,0000 weapons arrive annually from the U.S. to Mexico, and they are doing absolutely nothing” (50:00).

On the other hand, Candidate Meade admitted: “We have to take care of the border, so weapons don’t cross” (56:14).

How about a wall—and Mexico pays for it?

TREATMENT OF ILLEGAL ALIENS IN MEXICO

The candidates recognized that illegal aliens are treated badly in Mexico.

Anaya: “We are not going to have moral authority to demand of the U.S. that they respect our migrants if we don’t respect the Central American brethren that enter our country. We’re not doing it. Let’s set an example. Let us cooperate with the Central American countries and demonstrate that a peso invested in cooperation is worth more than a peso invested in an absurd wall that Donald Trump wants to construct” (1:14).

Meade: “The migrants who come…we need to invest first in health, we have to attend to them” (1:15).

AMLO...blames the U.S.! “The neighbors of the north…want us to continue doing the dirty work to stop Central Americans” (1:19). Bronco: “Whoever wants to cross through Mexico can do it in a dignified manner” (1:13).

Anaya went off on a spiel about how well some Haitians were treated in Tijuana: “This is the Mexico that I want, a generous Mexico, a Mexico that opens its arms to its brothers that come suffering and fleeing. When we do that we are going to have moral authority to demand that the United States does the same” (1:17).

The U.S. has taken in millions of immigrants. Trying to prove Mexico has been more hospitable to immigrants would be ludicrous.

Meade said many of the Central Americans don’t want to go to the United States (1:18).

Well, most of them do, and that’s our business.

Summary: thousands of third-country nationals will flow through Mexico to the U.S., and we can’t count on Mexico to stop it.

ONLY ONE CANDIDATE ACKNOWLEDGED PROBLEMS WITH MIGRATION

No kidding. Why is that bad when the U.S. does it?

THE NEED TO IMPROVE MEXICO

The candidates acknowledged that Mexico must improve:

AMLO: “I maintain that the best foreign policy is the internal policy. If they threaten us with constructing walls, with militarizing the border, with pursuing our fellow Mexicans, we should strengthen our economy so there is work so our people don’t have to emigrate” (12:23).

Mexican politicians say this sort of thing all the time. They want people to emigrate.

AMLO, touted in the MSM as the most radical and anti-American candidate, actually admitted to agreeing with Trump twice:

AMLO pledges to end corruption, which is easier said than done.

Once again, easier said than done.

MEXICAN CONSULATES IN THE U.S.A.

Mexico has 50 consulates in the U.S. They already meddle a lot, but all these candidates want them to meddle even more:

AMLO: “I propose that the 50 consulates that Mexico has in the United States become attorney general’s offices for the defense of the migrant” (1:30).

Later, he repeated it: “The fifty consulates that Mexico has in the United States are going to be converted into a type of attorney general’s office for the defense of the immigrant” (1:42).

Attorney generals’ offices here? To defend Mexicans in the United States? How? By prosecuting U.S. officials?

For this part, Anaya would “double, at least, the budget of the consulates to emphasize legal protection and especially to defend the principle of family unity, so they stop dividing families” (1:52).

The candidates pledged to help deportees returning to Mexico. Anaya called for “a comprehensive initiative for those who return” (1:52).

We need to help them out by deporting even more.

Moderator Krauze: “Part of the intention of this debate is to listen to the millions of Mexicans who can’t be here with us because they are undocumented immigrants in the United States” (1:31).

Krauze pulled out a photo of Antonio Alarcon, a DREAMer with a bullhorn, who stayed in the U.S. even after his parents returned to Mexico [Resolve on Reform, by Madeleine Cummings, Manhattan Times, Oct. 30, 2013].

So who broke up that family?

(Mexicans are now using the word “DREAMers” in Spanish, by the way).

Alarcon himself had provided a question for the debate: “What do you pledge to do for the Mexican DREAMers who fight daily to complete their goals and to be recognized in a country there that doesn’t accept them?”

Anaya: “Absolutely everything.... Donald Trump threatens to deport them if what he wants in terms of the bilateral relationship doesn’t occur” (1:32).

Question: If, as Alarcon says, DREAMers are not accepted here, why not leave and go home where they will be accepted—particularly given that these candidates pledge to provide assistance for returnees?

I’ve written before for VDARE.COM about Jose Hernandez, an astronaut born in the U.S. who identifies as Mexican. He wanted to wear the Mexican flag when went to space but couldn’t. 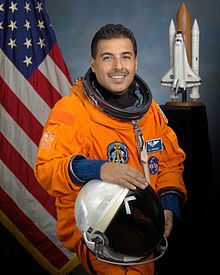 “Yesterday I met with Jose Hernandez…. He is a Mexican proud of his country [i.e. Mexico], who lives in the United States. We want many more like Jose Hernandez and we’re going to achieve that by defending the national interest and being on their side” (1:33).

So an American astronaut trained on the taxpayers’ dime considers himself a Mexican? And Anaya wants “many more like Jose Hernandez”?

Meade, who has experience in the Mexican government, explains how it’s done:

“The work of the migrants has a lot to do with what we accomplish with mayors and governors. For a migrant, the difference between being deported and not being deported can be a driver’s license” (1:34).

Does this mean the push for licenses for illegals is not, in fact, about driver safety? What a shock!

Meade: “The migrants did a great work to achieve the approval of those two measures, the DREAMers [DACA] and DAPA…. They, together with us, designed a strategy that permitted these 530,000 young people…to be registered with our consular support” [1:35].

If the Russians did this, the Main Stream Media/ Democrats would call it “meddling” in American policy, wouldn’t they?

AMLO: “I want a relationship of friendship with the government of the United States but not of subordination. Mexico is a free country and sovereign. We are not going to be subject to any foreign government” (1:43).

Sounds great. I only ask the same—that the United States not be subject to Mexico.

Moderator Krauze: “Would you be willing to pay or help pay for the wall in exchange for a path to citizenship and peace for all the millions of Mexicans undocumented in the United States would you do it?”

Bronco: “I would charge Trump for all we have invested in the migrants” (1:48).

Americans, he explained, should pay for the previous investment in migrants for their education, health care and work experience in Mexico, before they went to the United States.

Even Krauze looked at Bronco as if to say, “What?!”

MIGRANT REPRESENTATION IN THE MEXICAN CONGRESS

Anaya: “We should guarantee by law the representation of our migrants in Congress, that their voice be heard, a strong voice. We have an historic debt with the Mexican migrants” (1:52).

Think about that. Anaya proposed representatives in the Mexican Congress for Mexicans living in the United States.

Is that a step toward annexation?

Candidate Anaya delivered what might have been the strongest, most emotional attack on the Trump Administration. You can watch it and sense his arrogance, even if you don’t understand Spanish (1:28:48-1:29:59):

“What is happening particularly in the U.S., where the majority of our migrants are, is unacceptable. Not only have they increased deportations 40 percent this year so far, but they changed the profile. Now they are not just deporting the ones who just crossed. They are deporting persons who have been there 20, 30, 40 years. I was just in the shelter of Santa Maria la Ribeira with Ana Laura. [She is] completely destroyed. They deported her recently. Her two children stayed there, one 14, one 16. She is forbidden to return for 20 years. They didn’t even allow her to make a call to the consulate. She arrived here cuffed on her feet and hands. What they gave her was this sack to put her belongings.”

Anaya showed it and carried it across the stage, saying: “When I see this happening to the migrants, I say CARAJO.”

(Carajo is an obscenity, more or less equivalent to the F-word. It’s inappropriate for a political debate, but Anaya wants anti-Trump, pro-migrant street cred).

“Where is the Mexican government? I’m going to be on the side of the migrants.”

Obviously, Anaya doesn’t think we should deport any Mexicans.

WHAT CAN WE LEARN FROM THIS DEBATE?

And really, none should be expected to. That’s our responsibility.