President Trump has already succeeded in making many Mexicans in the United States return to Mexico. This repatriation already began even before the inauguration. But evidence it is continuing is piling up. 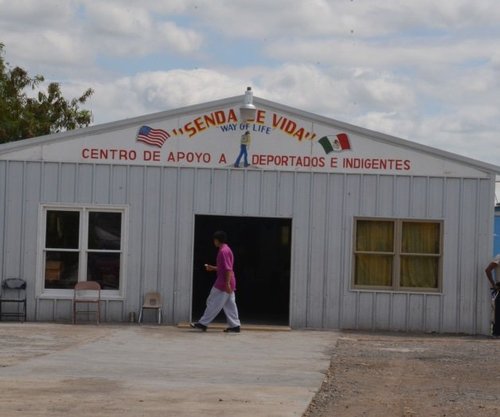 The Main Stream Media likes to pretend mass immigration has no harmful effects on wages or housing costs in America. But, in an attempt to attack President Trump, it is willing to admit returning Mexicans will drive down wages in Mexico.

And the Mexican press now reports returning Mexicans are driving up housing costs in the state of Mexico (also known as Edomex), the country’s most populous state.

Due to the return, this year, of a high number of migrants to our country, the purchase of subsidized housing [by means of loans or a government subsidy] in the northeast zone of the State of Mexico, particularly in the municipios of Ecatepec and Nezahualcoyotl, has increased 20 per cent over 2016, reported the president of the Asociación Mexicana de Profesionales Inmobiliarios in the northeast zone of the Estado de Mexico (AMPI-NOVA), Guillermo Isaac Castro Lopez.

[Por regreso de migrantes sube costo de vivienda en el Edomex “Due to return of migrants the housing costs have gone up in the State of Mexico,” Excelsior, May 8, 2017].

A municipio is like a cross between a city and a county. Ecatepec and Nezahualcoyotl are essentially suburbs of Mexico City.

(The new president of the association, Isaac Castro, just took an oath for the 2017-2018 term, so Excelsior shows five Mexican officials of the association performing a Nazi-like salute, a form of Mexican salute  unconnected with WWII. 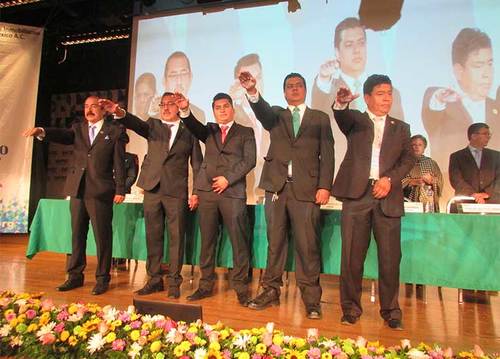 It freaks out Americans—although that’s how we did it before World War II, as I remember my father telling me.)

Said Castro: “Since the past January, an increase in the purchase of vivienda de interés social has been noted, under 500,000 pesos. …. in this northeast zone of the State of Mexico, most of the costs of housing vary in an average cost of 400,000 pesos.”

Nearly twenty percent more of these houses are being sold in comparison to last year, and also the housing in the State of Mexico has gotten more expensive, increasing 15-20% compared to 2016. Thus, even subsidized housing prices are increasing.

So Trump is having an effect. As VDARE.com has long predicted, if immigration laws are enforced, illegals go home.

Note too that the Mexicans who go back have somewhere to go, their home towns. And this is only a report from one region; migrants are returning to all regions of Mexico.

Much of this return migration is driven by expectations of future enforcement actions. But most of what Trump promised has not occurred. The Wall doesn’t exist; DACA is intact and taking new applicants. We need to keep up the pressure.

At the same time, as President Trump hopefully feels the heat from immigration patriots at home, the Mexican government is coming under pressure to do more for returning migrants. This is a good thing.

Of course, even before the inauguration, the Mexican government had implemented a program to provide aid. President Enrique Pena Nieto also personally received deportees at the airport in an unprecedented action [Mexican President’s Photo Op With Deported Migrants Backfires, by Tony Aranda, Breitbart, February 9, 2017].

The Mexican government has announced several other efforts to help returning migrants over the last few months. 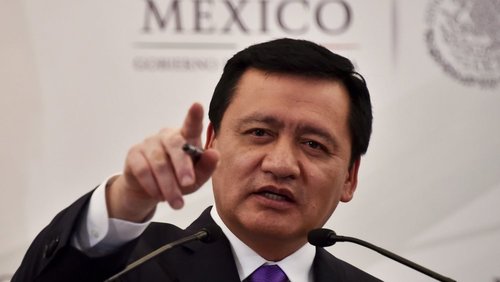 Mexican Interior Minister Miguel Angel Osorio Chong announced the creation of 50,000 new jobs for deportees. There were few specifics, but curiously, Osorio Chong said the plan had been developed after negotiations with U. S. officials. Anyone know anything about this?  [Anuncia Osorio Chong creación de empleos para deportados, el Siglo de Torreón, March 16, 2017]

A measure passed by the Mexican government in March is supposed to help integrate returning Mexicans into the Mexican educational system.

It has six points:

Luis Wertman Zaslav, president of the Citizen Council of Mexico City, announced this morning [January 31] that the capital of the Republica would be converted into a “Sanctuary City” so that all the fellow Mexicans who return from the United States and attempt to live in the metropolis, or for those who have to pass through the city to arrive to where they are from.

Despite what you might assume, this doesn’t mean Mexico City is a sanctuary city for non-Mexican illegal aliens in Mexico. They’re still not welcome. It means it’s a “sanctuary city” for Mexicans who return from the United States.

But they’re Mexicans, right? Why do they need special permission to go to Mexico City?

At least the authorities are thinking of repatriated Mexicans, complete with giving them a helpline for returnees, issuing credentials for the skills they practiced and providing identity documents.

Mexico’s Labor Secretary, Alfonso Navarrete Prida, recently signed a labor agreement with Guatemala, El Salvador and Honduras. It’s said to be the first such agreement between these countries in history and involves a modest exchange of guest workers.

Interestingly, Secretary Navarrete speaks openly about Mexican laborers who could be displaced by Central Americans and even by other Mexicans returning to Mexico:

Bottom line: some interesting - and potentially positive – things are happening in Mexico. Mexican government officials realize they need to do more to help returnees, especially as it could become a political issue and the political parties compete to show who is doing more.

Of course, the Mexican government will continue to meddle in our immigration policy, especially as our government (even Trump) seems oblivious.

But if the Trump administration keeps up the pressure, Mexico will be forced to take back and then help their own people.

Americans are definitely not “tired of winning”—but here, at least, is a start.