The House Republicans have replaced defeated Amnesty shill Eric Cantor with Amnesty shill Kevin McCarthy as their new Majority Leader. Having learned nothing and forgotten nothing, the Republican Establishment is doubling down on its vision of a party of Politically Correct corporate lobbyists. But immigration patriots should take heart—this development widens the divide within the Republican Party and increases the probability of a new movement centered squarely on stopping mass immigration appearing on the national scene. The Republican Establishment’s arrogance and stupidity should be seen as an opportunity. 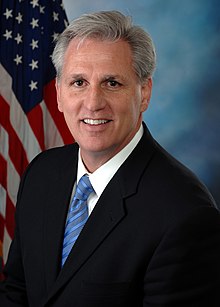 The opportunity lies in the political reality that even mainstream conservative stalwarts like Red State’s Erick Erickson are fed up with the GOP’s betrayal of immigration patriots. Unconsciously (or perhaps consciously?) echoing the late Sam Francis’s famous joke, Erickson wrote in a post called “The Stupid Party” soon after Cantor’s defeat that House Republicans have decided to “ignore the results as a meaningless anomaly” and “Amnesty is coming… They care more about Wall Street dollars than Main Street voters. “[RedState, June 12, 2014]

Kevin McCarthy is a particularly obnoxious breed of traitor, eagerly facilitating the loss of California to the Reconquistas if it means he can cling on to office just a little bit longer. McCarthy exists to serve the interests of his large donors, especially agricultural concerns. And he dodges immigration patriotism despite being protested at his home by obnoxious anti-American activists—meaning that he must know the kind of people to whom he is handing over his state.

Nevertheless, despite doubling down on pushing cheap labor, the Republican Leadership clearly is wary of the conservative base. Fearful of giving the wrong a.k.a. truthful message to conservatives who might wander off the planation, the Republicans actually kept the leadership vote secret, even from the members of their own caucus, so as not to show any divisions. And according to Rep. Steve King (who is keeping up his opposition to Amnesty), McCarthy (along with other candidates) at least said he was opposed to Amnesty, despite his record.

As King notes acidly: “Now we just need to get to the point where we all agree what that means.” [GOP Leadership Keeps Vote Totals Secret From Rank-and-File Members, by Joel Gehrke, National Review, June 19, 2014]

But McCarthy’s support for Amnesty is so prominent that it can’t just be swept under the rug. With his new political prominence, it is also drawing attention from the national Main Stream Media.

Unlike Cantor, McCarthy actually has a specific position on Amnesty, pledging support for “legal status that will allow you to work and pay taxes.” [House Majority Whip: Legalize undocumented immigrants, by Jose Gaspar, Bakersfield Now, January 22, 2014] As the liberal webzine Vox.com points out, “only a sliver” of the American public shares this position. Amnesty supporters want a path to citizenship for illegals. Amnesty opponents want illegals deported, not remaining in the United States as a helot class. [Kevin McCarthy has the least popular possible position on immigration, by Dara Lind, Vox.com, June 19, 2014]

Unfortunately, a helot class is precisely what McCarthy’s most important constituency, wealthy Republican donors, want. On the very day McCarthy secured his position, Sheldon Adelson published an article entitled Let’s Deal With Reality and Pass Immigration Reformin Politico. Adelson’s article is almost a parody of corporate Republicanism, with its sentimental references to the Statue of Liberty and attributing original ownership to America to American Indians in order to conceal its blatant pursuit of self-interest. (Of course, as Adelson himself has indicated elsewhere, the United States is not his country).

McCarthy is thus in an impossible position: caught between Leftists who want to Elect A New People to outvote the despised palefaces, post-Brat conservatives infuriated at the GOP leadership, and Republican donors who want McCarthy to follow up on his stated position.

Amnesty is still a threat—as Mickey Kaus says wittily, it’s a zombie that can never die—but McCarthy can only pass it if he openly chooses to spurn the conservative base and create a major breach just before the mid-term elections.

Paradoxically, the Amnesty danger would have been far greater had the alleged “conservative” candidate won the position of House Majority Leader: former immigration lawyer Raul Labrador, who lately has been masquerading as an Amnesty opponent despite working with Eric Cantor to push Amnesty and import more low skilled workers in October 2013. As the “conservative,” Labrador might have been able to pull the wool over the eyes of more grassroots Republicans and push through an Amnesty bill either this session, or, more likely, in 2015.

But don’t take my word for it. Oblivious dweeb Hugh Hewitt supported Labrador for precisely this reason. The penultimate reason Hewitt gave for supporting Labrador over McCarthy:

Labrador's elevation would instantly kill off the re-emergence of the extreme anti-illegal immigration sliver of the GOP. This sliver isn't very big, but it is very loud, and its potential for doing damage to the GOP is enormous, especially in places like Colorado where Tom Tancredo, who left the GOP in 2010, wants back in as its nominee for governor in 2014 and threatens to take the plurality vote on the fuel of the extreme anti-illegal immigration rhetoric… The appearance of ignoring the immigration issue in Cantor's defeat by voting for McCarthy—a crucial part of the anti-Cantor coalition— would add fuel to Tancredo's bonfire of his personal vanities. For this reason alone GOP members frustrated by not having their bills taken up by the Senate should vote for Labrador. He greatly increases the chances of a GOP takeover of the Senate. To repeat: A vote for Labrador for Leader greatly increases the prospects of a unified GOP Congress to face down President Obama in 2015-2016 and set-up the GOP nominee for the showdown with Hillary. [10 Reasons to vote for Rep. Raul Labrador, by Hugh Hewitt, Townhall.com, June 17, 2014. Emphasis added.]

Ironically, Hewitt’s approach to politics is identical to Kevin McCarthy’s: neither can see beyond the next political horserace, even as the demographic foundations of the conservative movement (and America) crumble away.

But Hewitt’s analysis was right, if not for the reason he thinks. Labrador’s advancement would have helped keep the scam that is the Beltway Right going a little longer, fooling patriotic Americans into thinking they have a voice even as Conservatism Inc. schemes to pass Amnesty after the next election.

Instead, the battle lines are more defined. With McCarthy ensconced as the face of the GOP in the House, the Republican Party has openly proclaimed its subservience to its masters at the U.S. Chamber of Commerce and its intimidation by anti-white race-baiters.

There is not even the pretense of populist roleplaying – simply an order by the Republican leadership to the grassroots to shut up and take it.

But with candidates like David Brat placing immigration at the center of their campaign, stalwarts like Tom Tancredo back in the headlines, and the conservative grassroots openly in revolt, the voters the GOP needs to win in 2014 are in no mood to obey orders from the leadership.

It’s not inevitable, but the door is open for a populist and patriotic American Right.

Kevin McCarthy is so obviously a mediocrity and a sell-out that he is forcing the Republican grassroots to consider the new strategies, policies, and philosophies it will need to adopt if the conservative movement – and the United States – is to survive.

So congratulations, Leader McCarthy. Because when it comes to who heads the Stupid Party, for now, Worse is Better.