One Year After, A “White Hispanic” Broods On The Curious Transformation Of George Zimmerman 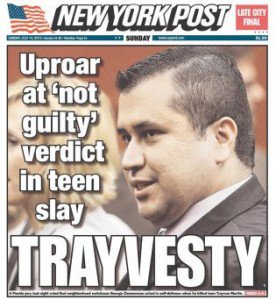 George Zimmerman was acquitted of the murder of Trayvon Martin exactly one year ago (July 13, 2013).

Not the least interesting aspect of the Trayvon Martin scam, blatantly orchestrated by the Main Stream Media to demoralize whites and rile up the Democratic base in a presidential election year, was the sudden emergence of the term “white Hispanic.” So, in a country where minority opinion is now needed to legitimize any and every thought, take it from a white Hispanic (me): George Zimmerman isn’t one.

Though the authenticity of the photo of Zimmerman's black great-grandfather was never determined (not that anyone looked into it), the photos of his mom are completely uncontested. The argument that she is white defies imagination… so how could her son be?

So what is a “white Hispanic,” and how did an Afro-Peruvian named Zimmerman who voted for Obama get to a point where he was compared to a Klansman? [TRAYVON MARTIN: The 9 Most Striking Cartoons about the Florida shooting tragedy,By Michael Cavna, Washington Post, March 24, 2012] As a genuinely white Hispanic, I can offer some insights. 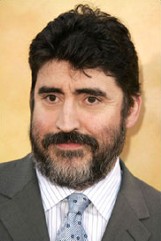 I was born to a Chilean father and a German-Irish mother just after the Cold War ended, when America was less than a tenth Hispanic and my home state was about a fiftieth. I grew up in a white and Jewish neighborhood, and was considered just as white as everyone else, being about as pale as VDARE Editor Peter Brimelow. People had trouble spelling and pronouncing my surname, but that was true of plenty of other kids with complicated Polish or Scandinavian names. My father, whose skin tone is on par with Alfred Molina’s (the London-born Molina is of Spanish and Italian descent), was sometimes assumed to be Jewish.

At home, I spoke Spanish because my father wanted me to be fluent. That about sums up my Hispanic identity throughout the ‘90s and into the early 2000s.

While my public elementary school had been almost entirely white, my middle school was a classic example of forced busing. By that point (2005), America already had more Hispanics than blacks, and my state had passed the five percent mark.

It was then that I encountered my first mestizos—almost entirely Mexicans. Racial tensions ran high in my school, and the Mexicans never considered me to be “one of them”—and the feeling was mutual. I was fluent in the same language as they were, but we did not listen to the same music, wear the same clothes, live in the same neighborhoods, etc.

It was around this time that more and more people (of all races) began pronouncing and spelling my last name correctly. Looking back, I suppose I could have considered all the previous misspellings as “micro-aggressions,” but (and my six year old self would never believe I was saying this) I really miss when no one knew how to spell my name. A few months ago, someone asked if they pronounced my name correctly after reading it off my nametag. I said “yes” (which was the truth). She smiled back at me saying, “Being from California has its advantages.”

I can’t remember what I said in reply.

By the end of high school and into college, my Hispanic status became a very strange talking point for white liberals. I began encountering people who would insist on pronouncing even my first name with a Spanish accent. Others wanted me to tell stories about my encounters with racism or xenophobia. Others still wanted to talk to me about the “neo-liberal imperialism” my people had suffered at the hands of America.

To certain liberals, I achieved a weird “token” status, where I was expected to provide first-hand accounts that would back-up their theories of American hegemony or some other buzzword easily found in any Noam Chomsky book. Let the record show that having my name misspelled is immensely preferable to having self-professed Socialists start yammering on and on about Naomi Klein’s Shock Doctrine the second they learned my dad was born in Chile. Let the record also show that when Salvador Allende was overthrown in the quick coup, my family (which had been suffering under Marxism for years) was elated.

But therein lies the trouble. Every time I have rejected the token-Hispanic role liberals have offered me, I am immediately just another awful non-liberal white.

A few years ago, when someone told me that I seemed “pretty white” for a Chilean, I decided to have a bit of fun, and explained to them that Chileans are quite white—so white, in fact, that there were Nazi congressmen in Chile in the 1930s. Apparently the history of Nazism in Chile is something along the lines of a “hatefact” because, after that conversation, it was of course assumed I was a Nazi.

Senator Ted Cruz has also had his “Hispanic” status attacked by virtue of not being a liberal. It was not so long ago that liberal Hispanic Bill Richardson claimed Ted Cruz should not be considered Hispanic in light of his “anti-immigration” views. [Bill Richardson: Ted Cruz is not a real Hispanic, By Cheryl K. Chumley, The Washington Times, May 6, 2013]

George Zimmerman is another spectacular example of someone’s “Hispanic” status getting revoked. In the bizarre world of the contemporary Left, designated victim groups are in a kind of social contract with their white Cultural Marxist leaders. In exchange for little goodies like EBT, “Obama phones,” and the like, non-whites must fit into a particular narrative of victimization that white Leftists can wield as a political weapon against Southerners, Middle Americans, etc. Poor George Zimmerman was doing his part: supporting Obama, complaining about racism, etc. But then he went and protected himself and his neighborhood. The Left has no use for people who shoot and kill black criminals.

But the Left does have a use for Hispanics. So what is to be done when a Hispanic shoots a black? Make the Hispanic a white Hispanic!

In the case of Zimmerman, and likely many cases in the future, the “white” in “white Hispanic” just means “bad.” The Left is simply using the word “white” as a slur.

This is why, as Steve Sailer has shown, white Hispanics that are genuinely white are never called anything but “Hispanic” so long as they are Leftists. This is why Ted Cruz cannot be considered “Hispanic” and why George Zimmerman was suddenly and magically considered white, despite his obvious mestizo features.

If Zimmerman had remained a mere Hispanic, then a Hispanic would have killed a black – and the fault lines between those two groups in this country cannot be discussed, lest it cause trouble in the Democratic Party’s uneasy coalition.

As is often the case with the Left, the facts don’t matter too much. My obviously white features could be easily ignored if I wanted to talk about CIA plots to flood Latin America with cocaine or some such. Likewise, if George Zimmerman had been shot and killed by an Anglo, the Main Stream Media would have taken into account his dark skin and black lineage in order to talk about “white-on-Hispanic violence” or xenophobia. With Hispanics, “white” is just a slur, as is steadily the case in more and more places in this country.

Up until the Zimmerman case, when I called myself a “white Hispanic” people often gave me a funny look, then would think on it, and then decide it made sense.

Since the Zimmerman case, when I call myself a “white Hispanic” people have occasionally said, “Oh, like George Zimmerman?”

To which I always reply, “Yes – but even whiter.”

Benjamin Villaroel (email him) is a white Hispanic who speaks perfect English.