Rand Paul Sinking—But Is It Due to Foreign Policy Flip-flops or Racial Pandering? 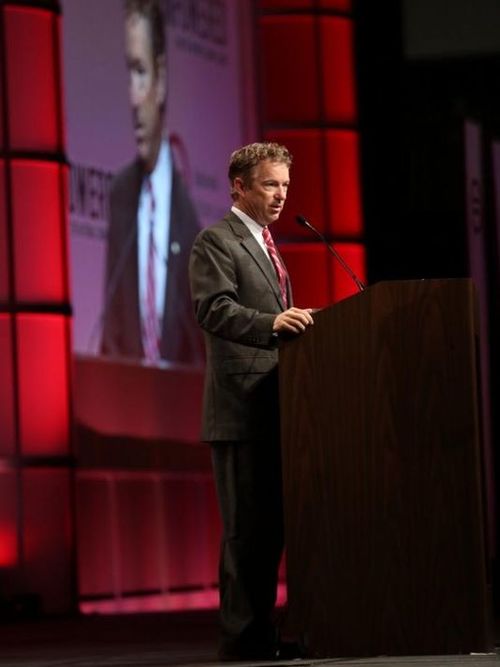 Rand Paul speaking in front of the Urban League

So Senator Rand Paul has attracted the interest of comedian Bill Maher. [“Real Time’s Bill Maher “could” vote for Paul, by Judy Kurtz, The Hill, September 10, 2014). He needs it—just four short years, Paul has gone from being a Tea Party hero who questioned the 1964 Civil Rights Act to a sellout shill for Amnesty and mass immigration. Recently, Paul has been trying to pander to blacks. Not surprisingly, his presidential prospects fade with each new unprincipled adjustment.

In some ways, Paul is actually worse than the usual hapless appeasers of the GOP. In a speech [YouTube] to a “sparse crowd” at a “half-filled auditorium” at the Urban League in July, Paul quoted Malcolm X, criticized supposed racial biases in the War on Drugs and vowed to fight to give felons the right to vote. [Rand Paul speech to Urban League draws sparse crowd, by Scott Wartman, Cincinnati Enquirer, July 25, 2014]

He blamed a discriminatory criminal justice system for the fact that, “three out of four people in prison right now for non-violent crimes are black or brown. Our prisons are bursting with young men of color …”

The great libertarian also proclaimed, “Not only do I support the Civil Rights Act and the Voting Rights Act, I’m a Republican who wants to restore a federal role for the government in the Voting Rights Act.” [Transcript — Rand Paul: We Must Fight For Justice, Cincinnati Inquirer, July 25, 2014]

So much for “constitutional conservatism.”

Writing in TIME magazine following the Ferguson riots, Paul took aim at the “militarization” of the police and alleged bias of the government and justice system. Sounding not unlike a sociology professor denouncing “white privilege,” Paul actually took out a less nuanced position than Barack Obama, as the President at least conceded that blacks are “disproportionately both victims and perpetrators of violence. In contrast, Paul maintained,

Given the racial disparities in our criminal justice system, it is impossible for African-Americans not to feel like their government is particularly targeting them.

Anyone who thinks that race does not still, even if inadvertently, skew the application of criminal justice in this country is just not paying close enough attention. Our prisons are full of black and brown men and women who are serving inappropriately long and harsh sentences for non-violent mistakes in their youth.

Shortly after this fiasco, Paul (along with Republican Senators Tim Scott, Marco Rubio and Rob Portman) came out as a supporter of racial preferences by sponsoring a Senate resolution urging the NFL’s “Rooney Rule” to be utilized by private companies. The resolution “encourages” companies to interview a minimum of two minority candidates for managerial positions and interview two qualified minority businesses before approving a vendor contract. [Text of a resolution establishing best business practices to fully utlize the potential of the United States, Senate Resolution 511, GovTrack.US, July 22, 2014]

So much for limited government. Paul is even leaving the late Jack Kemp in the dust when it comes to race pandering.

But Rand Paul and his handlers should know that the lesson of Kemp and other Republicans who grovel is clear: They lose their own base while failing to attract significant black, Hispanic or liberal voters. (Maher has made it clear he would really be voting against Hillary Clinton’s “warlike” tendencies—see Bill Maher on 2016: “Rand Paul could possibly get my vote”, Salon.com, September 10, 2014).

The proof: recent polls that show Paul sinking like a stone in the race for the 2016 presidential nomination. For example, a poll published on August 14th shows a significant fall in Tea Party support for Rand Paul, with his support level at 7%. He is now stuck in sixth place—tied with Rick Perry. Paul now even trails Marco Rubio. [Clinton Leads GOP Rivals, but Loses Ground, by Lee Miringoff, Barbara Carvalho, and Mary Griffith, McClatchy-Marist Poll, August 14, 2014]

Despite the hard numbers, Republican elites are so desperate to jettison their unfashionable white base that they haven’t noticed their strategy is backfiring. Even a few days after the latest polling, National Review’s Eliana Johnson [Email her] cooed

The Kentucky senator has made no secret that he is mulling a presidential bid, and his pitch to Republican heavyweights is that he represents a new kind of Republican who can appeal to constituencies, from African Americans to young people, on which Democrats have long had a lock.

But another member of the Republican Establishment has noticed Paul’s recent decline. Amnesty advocate Jennifer Rubin [Email her] dedicated her August 27 “Right Turn” column in the Washington Post to Paul’s nosedive in the polls. She believes Paul’s foreign policy is the culprit. Comparing his fall to Gov. Rick Perry’s slight surge, Rubin writes:

“Perry and Paul, it is not surprising, are moving in opposite directions. Perry has distinguished himself with robust support for Israel and tough foreign policy views and has been warmly received in the state while Paul got tripped up running from a immigration advocate [sic], getting caught in a flip-flop on aid to Israel and generally taking an Obama-like stance on foreign policy. That is a dynamic to keep an eye on: Do the knowledgeable hawks advance while foreign policy novices falter?”

Paul’s flip flops on foreign policy may indeed be a factor. But Rubin does not mention that Perry has also been taking a strong stand against the immigration invasion, even if it is only a cynical ruse. This is what distinguishes him from the current field—not “robust support for Israel.” Perry’s posturing appeals to Americans who feel they are losing their country. Whites are so desperate for at least one politician who at least pretends to listens to their concerns they are giving Perry a second look.

In contrast, Paul’s downturn comes at the time of his most aggressive shucking and jiving before blacks, Hispanics, leftists and everyone else but ordinary whites. Exactly like Jack Kemp a generation earlier, Paul is winning praise from the media and the leftist elites of both parties. What he is not winning is votes from the targets of his pandering.

Here’s a thought for Rand Paul (and his fellow Republicans, who are in the midst of throwing away a chance to take the Senate): If you must pander, why not grovel before people who might actually vote for you?