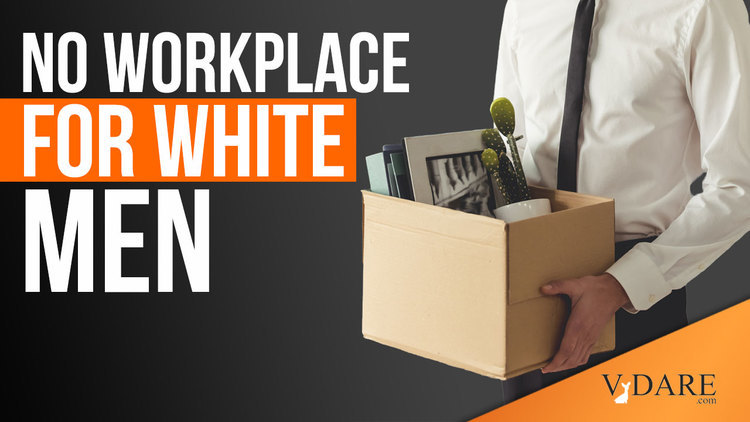 The Super Bowl, The Rooney Rule, And The Spread Of Anti-White Quotas In Obama’s America

Sunday’s Super Bowl game between the Baltimore Ravens and the San Francisco 49ers is an anticlimactic finale to the National Football League (NFL) season—two minor teams with no iconic players.  But it does have one interesting subplot: it’s the first time brothers are the head coaches of the respective teams—Jim Harbaugh for the 49ers and John Harbaugh for the Ravens.

Both are white, and, in a business where a head coach has all the job security of a Kamikaze pilot, they rose to the top on merit. However, it is increasingly clear that will soon be unacceptable in Obama’s America,

The reason? There were eight vacant NFL head-coaching positions after the 2012 season ended and every one of the positions went to a white man. That is just intolerable in 2013, when we have all been conditioned to believe that, wherever a white male is getting a job, some form of “racism” is being practiced.

(Ironically, even President Barack Obama has been embroiled in this controversy—for daring to hire white men for his Cabinet![America's first black president slammed for white male Cabinet, MSN, January 11, 2013]  And he has duly groveled: Obama urges patience to critics of white male nominees, CNN,  January 14, 2013.

Remember, the NFL already has the infamous Rooney Rule in place, mandating that a black candidate must be interviewed for every head coach opening.

Here’s what NFL.com writer Ian Rapoport (Message him on Twitter) wrote about the scandal:

The numbers themselves do not look good. For any proponent of the NFL's Rooney Rule and any advocate of open-minded hiring, it was a shutout.

Eight coaches and seven general managers lost their jobs following the 2012 NFL season. None of those posts was filled by a person of color.

That has led Robert Gulliver, the NFL's executive vice president of human resources, to call it "disappointing."

But was it a failure of the Rooney Rule, which requires teams to interview at least one minority candidate for each coach or GM opening?

Pittsburgh Steelers chairman Dan Rooney, namesake of the decade-old rule, views it differently. He would advocate for tinkering with the rule he championed in 2003.

"Let me say this: In all eight cases, we have very excellent compliance," Rooney told NFL.com and NFL Network in an exclusive interview. "Every team followed procedures, interviewed minority candidates. From that standpoint, we were pleased. As far as, now people saying they didn't get the job. Maybe this year, there weren't the candidates they thought there would be so they would get the jobs. On the other hand, it's up to the coach, the candidate, to show the owner that they're capable of doing the job. That's a big thing. Evidently, they weren't able to do that this year."

Rapoport is a white male sports journalist, bemoaning the lack of black male head coaches in the NFL for   NFL.com. It’s like reading Pravda from the old Soviet Union. Rapoport has to choose between the party line and the unemployment line.

But it gets worse. An expansion of the Rooney Rule is in preparation, to include the positions of offensive and defensive coordinator. That will be yet another road block in the career of white NFL coaches:

The Rooney Rule, which requires NFL franchises to interview at least one minority candidate for head-coaching jobs, is a good thing. But it's not working. However, CBS Sports NFL Insider Jason La Canfora reports the Rooney Rule will probably undergo changes in 2013, with the rule likely being expanded to include coordinator and assistant head-coaching positions.

League sources tell La Canfora there is strong support for Rooney Rule expansion in 2013 that will require NFL teams to interview a minority candidate for all coordinator and assistant head-coaching positions. Additionally, La Canfora reports the yet-to-be-proposed expansion would pass easily.

Following a full-blown white-washing of NFL coaching hires (eight vacant spots were filled with eight Caucasians) and front-office spots, the NFL said it would look into the lack of minority hires around the NFL.

NFL may expand Rooney Rule to include coordinators, assistant HCs, CBS Sports, by Will Brinson, January 20, 2013. Links in original.

Gresham’s Law states that bad money drives out good, and this applies to public policy too. Somewhere this Super Bowl weekend, Richard Lapchick (email him), the Cultural Marxist self-proclaimed “social conscience of sport” and compiler of the demographic breakdown of professional sports front office and coaching staffs, is smirking. One of the key goals he has fought for his entire adult life—the imposition of non-whites, particularly blacks, in every position in the front offices and coaching staffs of all professional and collegiate sports—is now one of the hot topics in Establishment Sports talk. Lapchick’s Institute for Diversity and Ethics in Sport at the University of Central Florida seems likely to form the blueprint for a future US Government Office of Diversity and Ethics in Public and Private Employment.

Typically, much of Lapchick’s moral authority comes from a very early example of a “Hoax Crime”. In 1978, according to Lapchick, some bad, racist white men broke into his office at Virginia Wesleyan College, and carved the word n-i-g-e-r—the Deplorable Word minus a “g”—on his stomach with a pair of scissors.

Lapchick been telling this story ever since, and according the New York Times , blacks wish he would stop, because for one thing, he actually pronounces the Deplorable Word in his stump speech. [A Lifetime of Battling Bias, By Harvey Araton, November 13, 2011]

According Gary Edwards, who was a student at Virginia Wesleyan at the time, but is now Men's Basketball Coach at Francis Marion University, Lapchick

The police, as a part of their investigation, called in the State Medical Examiner, Dr. Frank Presswalla, to look at the wounds. Dr. Presswalla concluded the misspelled racial slur that Lapchick said his assailants had carved on his stomach with scissors was “self-inflicted.”

There were people who said Lapchick had staged the assault to create publicity for his cause. Lapchick refused to take a lie detector test for “moral reasons.” And we never heard from him again at Virginia Wesleyan College. Those are the facts. You can look it up.

You could look it up—if you don’t work for the New York Times.

Lapchick’s self-inflicted scar, and his uninterrupted triumphal procession through the MSM, is a symbol of the age of Obama.

That’s the true state of not just the NFL—but America—on this Super Bowl Sunday.