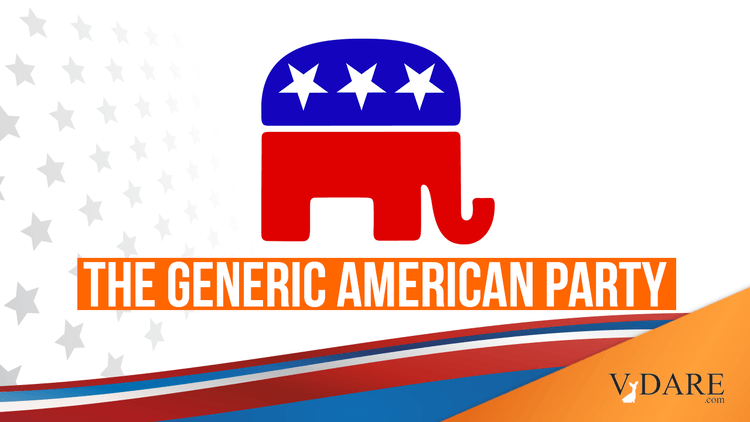 J Rubin: "We are entitled to forbid it!"

By and large the Weekly Standard has been a bad influence on American public life. But Matthew Continetti has gone a considerable way to earning WS redemption by publishing a powerfully intelligent essay The Double Bind What stands in the way of a Republican revival? Republicans. Mar 18, 2013.

The base of the party can be divided into groups… There are...businessmen and Wall Street Masters of the Universe, who put a priority on low taxes, especially on income and capital, fewer regulations, and free trade.… Ending corporate welfare and breaking up the big banks may sound swell, it may be the right thing to do, but you won’t see a Republican politician advocating these policies because that politician depends on campaign funds from banks and corporations.

He then shreds the GOP Establishment’s Amnesty fantasy:

…party elites …have signaled their willingness to compromise with President Obama on a “comprehensive immigration reform” bill.

Obama’s senior strategist, David Plouffe, recently told the New York Times, “By the way, the bigger problem [the GOP has] got with Latinos isn’t immigration. It’s the economic policies and health care. The group that supported the president’s health care bill the most? Latinos.” Maybe we shouldn’t listen to Plouffe, though. He’s only won two consecutive presidential elections.

Not only would an amnesty fail to win Latino votes, it would tear the Republican coalition apart. Wall Street and the business community may support comprehensive immigration reform because it would increase the supply of labor and keep wages competitive. But the everyday Republican voter is less sanguine about millions of newcomers showing up on his porch. (VDARE.com emphasis)

Continetti gives some thought to the GOP base who

...tend to be taxpaying married adults with families. And they tend to have been ill-served by the last couple of decades of American government, which has promised them the bounty of a global economy but left them paying the tab for the mistakes of Republican and Democratic elites, bankers, and bobos. These middle Americans see one party as the shield of super-rich “job creators” and the other as the shield of a growing number of government dependents and beneficiaries. These middle Americans’ wages are stagnant. The costs of health care and education are rising…

Seemingly headed in the direction of the Generic American Party formulation, he then veers off to end in wonkery.

But it was enough to outrage Jennifer Rubin: Immigration reform opponents have it wrong Washington Post March 10, 2013.

Jennifer Rubin first came to my attention in 2010 by managing to write a 3,100 word jeremiad about the decline of California without once mentioning the effect of immigration. Subsequently it emerged she had not given any thought to the issue. Later she was (laughably) promoted to write the ‘Right Turn’ blog at the Washington Post.

In this capacity she is willing to dictate to the Republican Party:

•    Dump any remnants of loyalty to America’s Christian tradition

What conservatives can’t do is be at odds with the American experience of greater inclusion and social tolerance. Railing at women in the military (as opposed to making sure standards are upheld so only the most capable of both genders are in strenuous, front-line positions) or making opposition to gay marriage a plank of a national party is not going to get the GOP anywhere...flailing at long-term social trends and popular referenda in state after state isn’t recommended.

The question for the GOP, and for conservatism more generally, is if it can defy the stereotype of an intolerant, unsympathetic party of whites. Conservatives shouldn’t be part of efforts to cement those stereotypes… the whole crotchety routine (Forget Hispanics! Kick gays out!) has to go.

How much wiser is the Continetti insight:

Human beings are not faceless monads choosing identities at will from a universal menu of options. Human beings are born into families, faiths, and nations.The security of all three of these pre-liberal forms of association is important. For families, that means growing incomes while lessening the costs of child-rearing, and giving parents blocking gear against the offenses of a hazardous popular culture. For faiths, that means protecting ministerial exceptions and religious liberty. For the nation, that means borders that are secure, a trade policy that puts the interests of American laborers over the interests of multinational corporations...