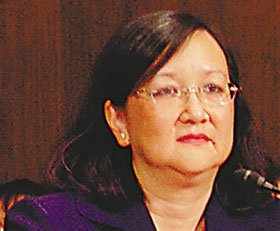 Grievance Driven Asian Judge Makes Up Her Own Law, Declares Illegals Should Be Freed

It’s the next immigration outrage Donald Trump should denounce. As we previously predicted, Obama-appointed judge Dolly Gee acted as a kritarch, a judge who thinks she can make law, and ordered the release of the illegal immigrants who had been lured to the United States by Obama’s Administrative Amnesty. Essentially, it’s a unilateral abolition of one of the few remaining aspects of immigration law enforcement. And needless to say, it’s based less on the law than on Gee’s personal feelings.

Who is Dolly Gee? She’s the first Chinese-American to serve as a U.S. District Court Judge, previously nominated by President Clinton but not confirmed until nominated again by Obama. And she sees her role in the court system as a way of achieving racial revenge against Whites.

"She said, 'Finally!' "Gee said on Friday [when she was confirmed]. "It's a huge breakthrough not just for me and my family, but our entire community…"

"As a daughter of immigrants from rural China, she personifies the American dream," the senator said in a statement. "She used her position as a prominent attorney in Los Angeles to promote racial tolerance and fight for justice for those who face discrimination." [L.A. Attorney Confirmed For Federal Judgeship, by Hector Becerra, Los Angeles Times, December 25, 2009]

Chinese-Americans are hardly oppressed in the United States, except perhaps by anti-Asian (and anti-White) affirmative action policies. Yet by “our community,” Gee means the Chinese in America, and by “racial tolerance” she means forcing illegals on America.

In this case, Gee said those “children” who came across the border in the latest Central American “refugee” surge must be freed because the facilities were evidently not fancy enough. Indeed, all families being detained “must be released as quickly as possible.”

In a decision late Friday [in July] roundly rejecting the administration’s arguments for holding the families, Judge Dolly M. Gee of Federal District Court for the Central District of California found that two detention centers in Texas that the administration opened last summer fail to meet minimum legal requirements of the 1997 settlement for facilities housing children.

Judge Gee also found that migrant children had been held in “widespread deplorable conditions” in Border Patrol stations after they were first caught, and she said the authorities had “wholly failed” to provide the “safe and sanitary” conditions required for children even in temporary cells.

There are several problems with all of this. First of all, Gee is a Federal District Judge for the Central District of Central California, yet for some reason she’s ruling on the conditions of detention facilities in Texas.

More importantly, Gee based her ruling not on any actual law, but a judicial settlement from 18 years ago, Flores v. Meese. [PDF] As the Times noted, that settlement “has governed the treatment of minors apprehended at the border who are unaccompanied — not with a parent. Judge Gee found that the Flores settlement, which has been carried out with little dispute from the federal authorities, also applies to children caught with their parents.”

Essentially, Gee unilaterally took a judicial settlement, not a law, and applied it to a new case. She then extended it to an entirely different group of people so as to justify releasing illegals from detention.

Besides, what are these detention facilities in Texas like? While conditions are not ideal for children, initial holding facilities were not part of the Flores settlement, are irrelevant to long-term custody conditions, and the fault of the illegal alien parents who brought their children to the United States in the first place. 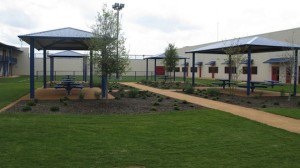 The follow-on facilities have been nothing less than Club-Feds for illegal aliens, costing millions when real jail facilities, both for adults and juveniles, would have been much cheaper. (Right, the Karnes County facility has gazebos with picnic tables—at your expense.) This is all part of the failure of the Obama Regime to detain illegal aliens, something this writer warned about many years ago.

But the most dangerous aspect of Gee’s decision was its contempt for the duly enacted laws of the United States. Gee deliberately and consciously steered her decision towards the end goal of freeing illegal aliens by simply applying the Flores agreement to this case, even though no settlement or contract can supersede an act of Congress. The relevant law here is Section 303 of the Illegal Immigration Reform and Immigrant Responsibility Act of 1996, which expanded and codified the authority to detain illegal aliens contained in the Immigration and Nationality Act.

Gee ignores the primary purpose of detaining illegals in the first place, namely, detention guarantees the alien’s appearance before the Executive Office for Immigration Review (EOIR) hearing. Even the Flores settlement and the current decision admit the federal government has the right to detain people in order to ensure an appearance at a hearing.

Plaintiffs argue that Defendants’ no-release policy—i.e., the policy of detaining all female-headed families, including children, for as long as it takes to determine whether they are entitled to remain in the United States—violates material provisions of the Agreement.

These provisions require ICE (1) to “release a minor from its custody without unnecessary delay” to a parent, a legal guardian, or other qualified adult custodian, except where the detention of the minor is required “either to secure his or her timely appearance before the INS or the immigration court, or to ensure the minor’s safety or that of others”; and (2) “[u]pon taking a minor into custody, . . . [to] make and record prompt and continuous efforts on its part toward family reunification and the release of the minor . . . .”

From her own ruling Gee ignores that the Department of Homeland Security (DHS) maintains complete discretion to detain aliens based on ensuring appearance. Gee just ignores that obvious and important exception in the Flores decision, which, again, cannot trump an Act of Congress.

Gee is both wrong on her authority to hear the case, wrong on the interpretation of Flores, and wrong on her failure to consider the applicable statute governing the detention of aliens. Clearly, Gee is waging a war on the Constitution motivated by an unethical racist bias in favor of aliens. Time for Gee to be impeached, along with Obama.