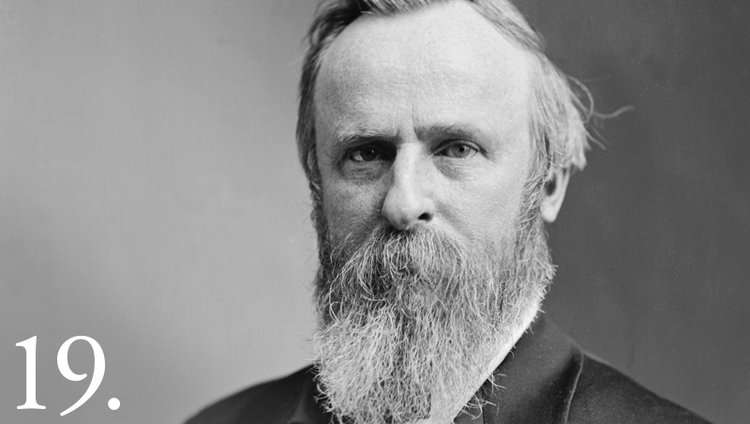 In 1971 President Richard Nixon proclaimed one single federal holiday, the Presidents' Day, to be observed on the third Monday of February. The new holiday would honor all past presidents of the United States.

Until 1971, both February 12 and February 22 were observed as federal holidays to honor the birthdays of Abraham Lincoln and George Washington.

Thirty-two years later, the country still hasn't caught on. We're still hung up on Lincoln and Washington to the exclusion of most of the other presidents, especially those from the 18th and 19th Century.

As Nixon envisioned it, Presidents' Day would pay tribute as much to William Howard Taft and John Quincy Adams as it would to any of our better-known leaders.

Rutherford B. Hayes, our 19th President, came into the spotlight briefly in 2000. Hayes, like George W. Bush, became president despite losing the popular vote to Democratic candidate Samuel Tilden. But Hayes assumed office because all of the disputed Electoral College votes went to him. Forever after, Hayes was referred to as "His Fraudulency."

We should know more about those early presidents. They were, for the most part, colorful characters not burdened down by the constraints of focus group polls and political correctness.

In the interests of carrying out President Nixon's concept of equal time for all former presidents, I'd like to re-introduce you to William Henry Harrison, our 9th.

Harrison is one of twelve presidents who held the rank of general in the U.S. Army. The others, alphabetically, were: Chester A. Arthur, Dwight D. Eisenhower, James Garfield, Ulysses S. Grant, Benjamin Harrison, the aforementioned Hayes, Andrew Jackson, Andrew Johnson, Franklin Pierce, Zachary Taylor and, of course, George Washington.

Harrison's impressive military credentials won him the Whig nomination in 1840 to run against incumbent Democrat Martin Van Buren. The Whigs, who had finally learned a valuable lesson from their old archenemy Andrew Jackson, chose Harrison over three-time loser Henry Clay.

What the Whigs realized is that if the choice for the nominee is between a veteran politician like Clay and a distinguished soldier like Harrison, go with the soldier.

Van Buren, who was unable to disassociate himself from the financial Panic of 1837 (he tried to blame it on his predecessor, Jackson), had picked up the nickname "Martin Van Ruin."

The 1840 campaign may have been the first on record wherein political spin played a major role. To capitalize on Van Buren's reputation as a pantywaist, the Whigs portrayed Harrison as a folksy fellow who like to sit in front of his log cabin, drink hard cider and whittle.

In truth, Harrison was of patrician stock, was the son of a signatory of the Declaration of Independence and had been raised in an elegant plantation mansion.

A few months into the campaign, Harrison adopted the nickname "Old Tippecanoe." And when the Whigs expanded that to "Tippecanoe and Tyler, Too," Van Buren's hopes went out the window.

Long-windedness did Harrison in. After standing in a freezing Washington D.C. March rain for nearly two hours as he delivered the longest inaugural address—8,445 words—Harrison contracted pneumonia and died on month later.

Harrison's 30-day term in office is the shortest of any president. He was the first to die in office.

The only other matter of note about Harrison is a personal one. The Harrison and his wife Anna Tuthill Symmes had more children than any other presidential couple—10.