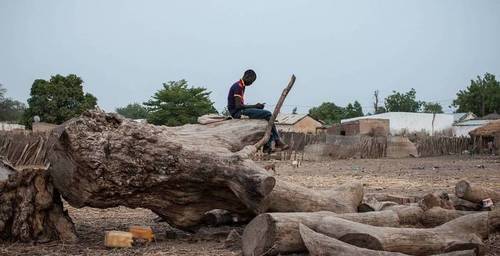 We’re supposed to believe that everybody scrambling to get into Europe is a refugee from some kind of war. But the Wall Street Journal sends reporter Drew Hinshaw to look at the flow of migrants out of Senegal, a country that is currently peaceful and (relatively) prosperous:

… Mr. Ba represents a puzzling segment of the migrant population: Unlike those fleeing war, famine or economic desperation, this group is risking rising living standards to brave banditry, starvation and stormy seas to make a better life in Europe.

But it has also put European living standards on real-time display, and handed young farm hands the cash to buy a ticket out. …

They leave behind a proud democracy whose steady economic growth has brought American-style fast food chains, cineplexes and shopping malls to this nation of 15 million, but hasn’t kept pace with the skyrocketing aspirations of the youthful population. Dusty and remote villages like Kothiary have become an unlikely ground zero for this exodus. …

The number of Senegalese jumped 123% from the first four months of last year, which also saw record emigration. West Africa houses several of the world’s faster-growing economies but is also sending some of the most migrants out. …

Students there, Mr. Sidibé included, have cashed out their scholarships to pay traffickers for a ride to Tripoli. Even their professors have traded in paychecks to journey north, joining policemen, civil servants and teachers, said Souleymane Jules Diop, the country’s minister for emigrants.

An aide walked into his office to list the countries that had seen spiking numbers of Senegalese showing up without papers—places the minister would have to visit in the next two weeks: Cuba, Brazil, Venezuela, Turkey, Morocco, France and the U.S.

“What is happening now is not that different from the time of slavery,” Mr. Diop said. “We are losing the arms we need to build this country.” …

For policy makers on the world’s poorest continent, the experience of Kothiary highlights a predicament. Senegal has followed almost every Western prescription on how to push Africa out of poverty: holding free and fair elections for four decades, liberalizing trade, building some of Africa’s better infrastructure.

And yet many of its best and brightest young people are leaving. Almost 75% of people here surveyed in a 2013 Oxford University study said they wanted to emigrate in the next five years. Last year, the ministry of emigration nearly tripled the number of passports it printed from the previous year.

Legal entry to most nations for a Senegalese citizen would require a visa—and, to obtain that, steady salaried work of a sort rare in Senegal.

The exodus is spurred by Senegal’s youthfulness. Half the population of Senegal, and of Africa, is under 19.

That’s one of the few hints in the article that population growth is driving this situation. Here’s the U.N.’s latest population forecast for Senegal: And from the CIA World Factbook:

Back to the WSJ:

These African youth are coming of age in a bleak job market. Just 11% of Senegalese adults were employed full time during a 2012 Gallup poll, a rate the poll showed was typical for the continent. For many young men who acquire extra cash, the best place they see to invest it is on a ticket out.

The result is a cycle that is making Senegal’s expanding economy hooked on remittances. … More than half the houses in Senegal have at least one family member abroad. In Kothiary, they are the homes with satellite TV. …

More than half the houses in Senegal have at least one family member abroad. In Kothiary, they are the homes with satellite TV.

…Four cellphone towers climb over the settlement. Constant electricity and treated tap water, their bills paid for with remittances, flow into its homes. Outside, some children still chase tires together down the dusty roads. More and more, however, hang by themselves, thumbing soccer games on their new smartphones.

… In the home of 72-year-old Amadou Kanté, four satellite TV dishes poke out from the walls of a two-story compound. There are TVs in several of his living rooms. Four Lenovo laptops are scattered on the furniture. Asked how many members of this family have a smartphone, his daughter Oumou Kanté replied, “everyone.”

Mr. Kanté lavishes praise on the son—a nurse in France—who sends him home the €225, or about $250, each month that buys these gadgets. …

And yet this year, a younger son sneaked out, calling his father to say he was a few days from the Libyan border and needed $600 to get to Tripoli. The old man wired the cash.

It’s not mentioned, but I’m guessing that this 72 year old patriarch who owns a compound with several living rooms is a polygamist:

A ‘polygamy belt’ stretches across Africa, from Senegal through to Tanzania, in which it is not uncommon for a third of married women to share their husbands (Jacoby 1995). In the present day, this prevalence is almost unique to Africa. All Demographic and Health Survey (DHS) data sets report that at least 92% of married women are monogamous – except for those from Haiti and sub-Saharan Africa.

You can see how polygamy ups the pressure on young men to take risks in order to eventually become the Big Man.