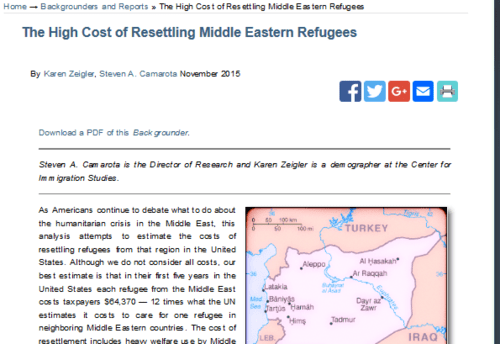 For The Cost Of Relocating ONE Syrian Refugee To The United States, TWELVE Of Them Could Be Helped In The Middle East

The Center for Immigration Studies (CIS) has an article showing that, for the cost of relocating one Syrian refugee to the United States, twelve Syrian refugees could be helped in the Middle East. That's quite significant.

Therefore, if the real goal is to help Syrian refugees, wouldn't it make more sense to help them in their own region?

On the other hand, if the goal is to further transform the United State, then the importation of Syrians makes perfect sense.

Here's the first paragraph of the CIS article:

As Americans continue to debate what to do about the humanitarian crisis in the Middle East, this analysis attempts to estimate the costs of resettling refugees from that region in the United States. Although we do not consider all costs, our best estimate is that in their first five years in the United States each refugee from the Middle East costs taxpayers $64,370 — 12 times what the UN estimates it costs to care for one refugee in neighboring Middle Eastern countries. The cost of resettlement includes heavy welfare use by Middle Eastern refugees; 91 percent receive food stamps and 68 percent receive cash assistance. Costs also include processing refugees, assistance given to new refugees, and aid to refugee-receiving communities. Given the high costs of resettling refugees in the United States, providing for them in neighboring countries in the Middle East may be a more cost-effective way to help them. The High Cost of Resettling Middle Eastern Refugees

by Karen Ziegler and Steven A. Camarota, CIS, November 2015).