VDARE.com Editor Peter Brimelow writes: For political and personal reasons,I found the passing of political scientist W. Wesley McDonald deeply affecting.This is an adaptation of a eulogy delivered by his long-time colleague Paul Gottfried at Elizabethtown College, September 30, 2014. Lydia and I were in the congregation.

The passing of Wes McDonald has left a gaping hole in the lives of many, starting with his wife, mother and sister, but also including those who valued his friendship. It is entirely appropriate that we meet to commemorate this colleague and friend in a setting that meant so much to him. For Wes, his connection to this college was more than a random or practical association. It defined his very being, and it would be impossible to think of him without noting this connection. 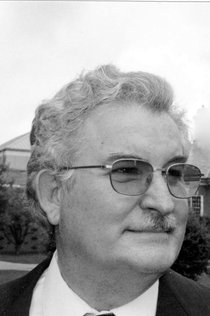 When you went to Wes’s office, it abounded in students, and they were there not “to butter up the prof” but because they genuinely relished Wes’s company. He would also invite students to his home, perhaps sometimes beyond the capacity of his wife to entertain and cook for them, because he and his guests truly enjoyed being with one another.

Wes was genuinely restless when he was not preparing for or teaching his courses, and he would often describe students as his children. To which I’d respond that, if this was the case, he spent more time and energy on his adopted children than I lavished on my offspring. He understandably dreaded the prospect of retiring, because it would have removed him from his calling and social world.

As someone who loved the familiar, he also had a special relation to everything that surrounded the college. He cherished his home, particularly when Alice was cooking in the kitchen, and he gloried in the fact that he lived so close to his office and work. Wes was also fiercely committed to the well-being of Elizabethtown College and became annoyed when his colleagues did not show an enthusiasm equal to his.

A small college is fortunate if it can elicit the passionate attachment from those associated with it that Wes routinely exhibited. Wherever he went, he stood up for his place of employment, and the first time we met in Washington, D.C. thirty years ago, Wes spoke non-stop about the potential for growth that he found in Elizabethtown College. I was bowled over by the extent and exuberance of his praise.

For those who knew the two of us, it would be hard not to remember our endless debates. Allow me to apologize belatedly for the annoyance these exchanges might have caused those who were within hearing range of them. Indeed in some cases these debates went on so long that the students who first heard them could have come back decades later and have noticed that neither the arguments nor the rhetoric had changed.

Admittedly, Wes and I engaged in these debates because both of us were contentious. I would never deny that. But we also believed that the academic world, as we experienced it, had become too conformist. So we set an example of how one should approach controversial questions that no one else seemed interested in touching.

These exercises became so basic to our relation that after Wes passed, my wife remarked that there was no-one now that I could joust with. This is only partly true. I do have others to debate with—but no one who would be as a steady debating partner or bring such zeal to our exchanges.

Two points should be stressed here. One, people debate the most furiously with those they largely agree with. We wouldn’t keep arguing with those with whom we have nothing in common.

Two, Wes and I learned a great deal from our disagreements. In his study of Russell Kirk, Wes elaborates on his subject’s differences with me on the complicated subject of historical conservatism. Although he generally takes his mentor’s side, he does full justice to my views, which he treats with exemplary fairness.

In my own articles and books—for example, in Conservatism in America: Making Sense of the American Right!—I take into account what Wes argued against my positions. Sometimes I modified what I wrote in light of our prolonged battles. This, I would note, is not an unusual way of responding to a debating partner of thirty years.

I should also mention that my daily exchanges with Wes allowed me to understand fully the differences between what VDARE.com calls Conservatism Inc. and what has emerged as the independent “Alternative” or “Dissident” Right.

Wes was a devotee of Establishment Conservatism and campaigned vigorously for the GOP. But when we first met in the 1980s, our political differences were not as stark as they later became. Both of us felt at least some loyalty to President Reagan and repugnance for those who were attacking him from the Left. However, in the decades that followed, our area of agreement dwindled, until at last we found ourselves fundamentally at odds on a wide range of issues.

But this too was a learning experience, as I eventually came to understand. Most conventional “conservatives” would never deign to speak to dissenters on the right, whereas Wes presented and defended Establishment Conservative views in discussions with me almost daily.

In our give and take I discovered both the appeal and weaknesses of what I felt impelled to combat. And the person I debated with made what may have been the best case for the other side. Never have I known anyone who steeped himself so thoroughly in up-to-the minute Establishment conservative positions—or who defended them so ably.

Despite his strong identification with Republican politics and conventional conservative stands, Wes showed independent judgment in his treatment of Russell Kirk. Although a onetime Kirk assistant, and someone who maintained a close relation with his mentor, there is no way one could confuse Wes’s monograph Russell Kirk and The Age of Ideology with any wooden tribute to his subject. The Kirk that leaps off from these pages is shown to be anything but a predictable GOP loyalist. He is portrayed as an archetypal paleoconservative who grew deeply disillusioned with the Reagan administration. Kirk was also depicted as someone who was more heavily influenced by his early studies in philosophy and literature than by Catholic doctrine.

Wes did not try to fit his teacher into the Catholic Republican category into which some of his present interpreters have placed him. Instead, Wes argues that Kirk’s conversion to Catholicism in midlife did not influence his thinking decisively and that he developed his formative ideas decades earlier. One might quarrel with this interpretation (although I wouldn’t), but it flies in the face of what “cultural conservatives” are now taught to believe.

Also testifying to Wes’s independence was his willingness to offer a thoughtful contribution to VDARE.com on Russell Kirk’s views of immigration. Such a move was not designed to evoke the applause of Conservatism Inc. Indeed it would have been frowned on by the very society Wes enjoyed being with.

I am trying to lighten this occasion by recounting my everyday relations with the person we have come together to honor. I don’t think he would have expected any other kind of eulogy. For never have I known anyone, save for myself, who hated solemn occasions and dressing up for them as much as Wes did.

The clothes in which he felt the happiest were baggy shorts and a pork pie hat, the attire in which he walked his West Highland Terrier on West Plum Street, in the vicinity of his home.

I shall never again be able to walk on that street without thinking of the man who has left his spirit there.

Paul Gottfried [email him ] recently retired as Professor of Humanities at Elizabethtown College, PA. He is the author of After Liberalism, Multiculturalism and the Politics of Guilt and The Strange Death of Marxism His most recent book is Leo Strauss and the Conservative Movement in America.