Pesky Questions About Those AWOL Afghans 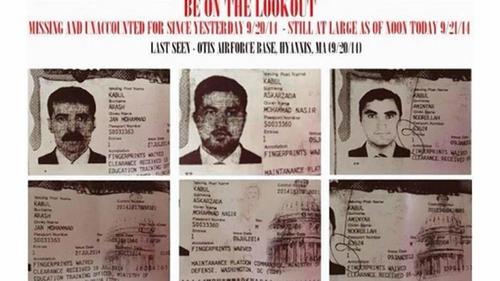 So the five Afghan soldiers who went missing from two separate U.S. military bases are now all accounted for and apparently headed back to their home country. Feel safer now? Don't.

The Pentagon, State Department and Department of Homeland Security would like this story to be over and done. (Just like they wanted the White House "fence-jumper" story to be buried. But then we found out he didn't just jump the fence; he also overpowered a Secret Service agent, burst through the halls and invaded the East Room wielding a knife.)

Here are my nagging questions about another hushed-up national security incident the White House would prefer to whitewash:

Both Afghan and U.S. officials rushed to assure the public that none of these men posed a security threat. The Pentagon said "they were vetted" by the State Department through its so-called "Leahy vetting process." Big deal. This so-called process has been under fire for years because of shoddy or unavailable records, as well as inconsistency across programs and agencies.

"We generally don't know who we are training. We have little reliable information," one U.S. official told RAND Corp. researchers. Their study "found significant problems with current U.S. vetting practices in relation to security assistance." That was six years ago.

In 2008, similar problems were exposed by the State Department inspector general in visa programs for thousands of Afghan and Iraqi translators and interpreters who worked for U.S. government agencies. The programs were deemed at "high risk for fraud and abuse," with almost 25 percent of those approved failing to meet the eligibility criteria.

And no such "safe zones" have been created here at home for when Afghan trainees come to our shores and suddenly wander off.

According to press reports citing unnamed federal law enforcement officials, Samimi and Ataye were "picked up in Buffalo, N.Y., without incident." Some speculated they wanted to reunite with a "relative." I'm sure the residents of Buffalo would appreciate more details.

Alarmingly, when I asked DHS/ICE public affairs officer Khaalid Walls on Tuesday what the status of the Quantico Afghan soldiers was, he told me: "I haven't heard of that."

According to Walls, the men will be in immigration court in Batavia, N.Y., on Thursday for a hearing. When I asked whether the feds would intervene if the judge orders them released pending further removal proceedings (which can drag on for years), Walls told me he didn't know. Side notes: The FBI is still searching for Canadian al-Qaida terror plotter Amer el-Maati, who trained in Afghanistan and Pakistan, and fellow Canadian fugitive jihadist Faker Ben Abdelaziz Boussora, another al-Qaida terror suspect trained in Afghanistan. And just last week, a Taliban-trained jihadist living in Ottawa pleaded guilty to a terror plot involving 56 cellphone-triggered explosive devices smuggled into Canada from Afghanistan.

Hiva Alizadeh was arrested with beheading videos and "How To Kidnap an American" pamphlets. Past Canadian jihad plots have targeted financial districts, tourist landmarks, government buildings and power grids on both sides of the border.

Last questions: Did the Quantico and Cape Cod soldiers know one another? Have any other Afghan soldiers gone missing? When? Where? Inquiring, non-complacent minds want to know.