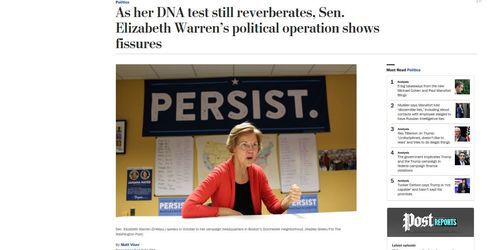 Already battling controversy over her claimed Native American heritage, Sen. Elizabeth Warren is nearing a decision whether to seek the presidency with a second problem: fissures in the tightknit political operation that has guided her throughout her career.

… Since Hillary Clinton’s defeat in 2016, Warren has been among the top-ranked potential candidates for the 2020 election. She built a massive strategic and get-out-the-vote team to help candidates in the 2018 elections, a move widely seen as a way to both ensure Democratic wins and build alliances in key early presidential states.

But she also stumbled notably in October, when she attempted to put to rest a controversy over her claim to Native American ancestors by releasing DNA results — a move that enraged tribal groups and other minorities concerned about her reliance on a test to measure ethnicity.

That episode injected uncertainty over the decision-making by Warren and her campaign staff and subjected her to both anger and mockery just as she was gearing up for a potential presidential effort.

Those close to Warren have warned recently that while she is still widely expected to enter the race, there remains a chance that she decides against it. …

But one of the biggest hurdles she has had to clear is explaining her claim of Native American heritage, which Republican critics, including President Trump, have used to argue she was seeking unfair advantage. A Globe review earlier this year found that ethnicity was not a factor in her career advancements.

Has the Boston Globe or Washington Post ever documented that any individual ever benefited from affirmative action? Generally, the MSM doesn’t want to talk about racial preferences and, as in this case, it’s extremely content with accepting Plausible Deniability.

In October, she took the extraordinary step of releasing the result of a DNA test that showed that Warren had a Native American ancestor between six and 10 generations ago. She sought to cast it as an ultimate act of transparency, and used it to call on Trump to release his tax returns.

That triggered both blowback from minorities and Native Americans and also criticism that she had submitted to a bully — precisely the opposite of her statements that she would be best positioned to aggressively take Trump on.

The concept of affirmative action fraud doesn’t really exist in the MSM, so they have to go through these kind of contortions to explain why Warren is in trouble.