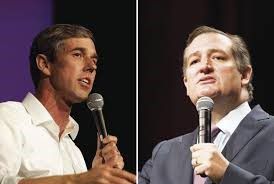 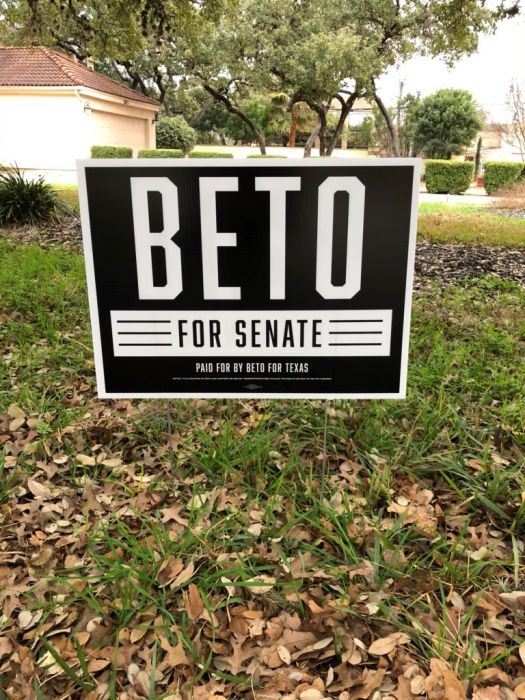 They’ve been popping up all over the state during the senate campaign this year, even in neighborhoods no one would dream of as hotbeds of support for the Democratic Party—those black-and-white signs with one large print four letter word in the middle: BETO. The signs are everywhere and yours truly has heard more than one uneasy neighbor or friend ask what’s up with the “Beto” signs. The subtext of those questions is pretty clear: “Is Ted Cruz really in trouble?”

Meanwhile, Senator Cruz’s campaign has been bombarded with one question: “Where are your signs?” The Cruz campaign has had to explain to frustrated supporters that yard signs are supposedly passé these days—Cruz campaign manager Jeff Roe views them as a far less effective use of campaign funds than knocking on doors, radio and TV ads, or robo-calls and direct mail. [Beto O’Rourke yard signs are everywhere. Where are Ted Cruz’s? by Abby Livingston and Patrick Svitek, Texas Tribune, August 29, 2018] Such assurances haven’t soothed the fears of anxious Texas GOP supporters, as the ubiquitous “Beto” yard signs seem to have played a significant psychological warfare role in the MSM’s campaign to get Democratic candidate “Beto” O’Rourke elected. “Betomania” is the watchword of giddy MSM reporting on the election, which has played up the chances of Robert Francis O’Rourke (his childhood nickname is “Beto”), a 45-year-old Congressman from El Paso, becoming the driving force in not only unseating Cruz, but in “flipping” Texas for the Democrats.

No Democrat has won a statewide election in over 20 years in the Lone Star state, and the last victory for a Democrat in a senate race was three decades ago. Nevertheless, the boyish O’Rourke, who radiates a certain kind of policy-wonk style liberal earnestness, has been compared to Bobby Kennedy, energizing the blue base in a way unseen in this state in recent memory (“He stopped and it gave me goosebumps,” cooed one [male] Beto supporter. That particular Beto supporter didn’t mention feeling any tingle up his leg, but readers no doubt get the idea.

MSM reporting has emphasized August polling that had Cruz in a virtual dead heat with O’Rourke (the polls showed Cruz ahead by a thin 2 to 4 points), prompting some to declare the race a tossup. Democrats are feeling cocky at the prospect of “turning Texas blue”—and making my home state a permanent People’s Republic as they have California, replicating the Austin “blue heaven” model on a statewide basis.

Beto O’Rourke is a very smart choice for the Democrats: apart from the Kennedyesque swoon he induces in his strongest supporters, O’Rourke is a normal looking white guy with a family (his three children play a prominent role in Beto’s TV ads), not the kind of radical POC that is becoming ever more popular with the Democrats, the type of candidate who could drive away white voters. 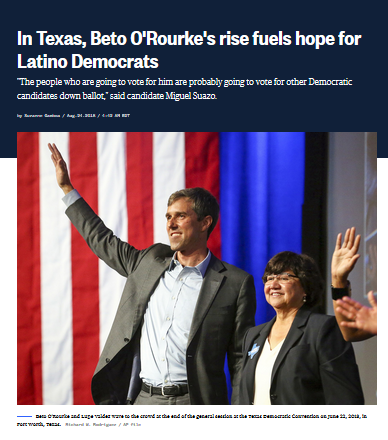 What’s more, O’Rourke is likeable and personable. His toothy grin projects enthusiasm and sincerity, and his campaign rhetoric is heavy on bipartisan, can’t-we-all-get-along happy talk With his tousled hair and rolled-up shirtsleeves, O’Rourke plays the Kennedy clone role quite well. His campaign says it has not taken any PAC money, even as O’Rourke leads Cruz in fundraising—$23.6 million to Cruz’s $15.6 million and O’Rourke is casting himself as a populist of the Left, a man of the people. (His campaign has made a lot of the candidate’s pledge to visit each of the 254 counties in Texax.(

But which people? O’Rourke is from El Paso, speaks Spanish, and has campaigned hard in heavily Hispanic counties near the border, attracting crowds to “Musica con Beto” rallies—events that are obviously not tailored for English-speaking Middle Americans. [In Texas, Beto O'Rourke's rise fuels hope for Latino Democrats, by Suzanne Gamboa, NBC, August 24,2018] He has been elected three times in a district centered in his hometown of El Paso, a district that extends along the Texas-Mexico border and the Rio Grande and his campaign positions are definitely meant to appeal to the Democrats’ “Coalition of the Fringes.”

Apart from O’Rourke’s support for “Dreamers,” his condemnations of Trump for “separating families,” and his opposition to a border wall, O’Rourke has crowed about “ending the school-to-prison pipeline,” supports a ban on sales of “assault rifles,” says he would not vote for Brett Kavanaugh for the Supreme Court, and backs a litany of other Leftist litmus test issues. [Max Boot: Beto’s challenge to the GOP on guns, By Max Boot, The Washington Post, October 1, 2018] He even says he’s “open to” replacing ICE, an extraordinary position in an illegal-impacted border state. [Ted Cruz says Beto O'Rourke is 'open to abolishing ICE', by W. Gardner Selby, PolitiFact, August 6, 2018]

It’s clear that Beto O’Rourke is not simply banking on mobilizing Hispanics voters—he is counting on the Great Replacement preparing the political ground for him, and some Democrats are already projecting a Beto presidential candidacy in 2020.

The MSM has unsurprisingly done its level best to ignore some dubious episodes in O’Rourke’s and his family’s past. What actually happened in that drunk driving incident back when Beto was 26? Did he really try to flee the scene? What about the burglary arrest on the University of Texas at El Paso campus? Then there was the suspicious white powder found in his father’s car back in the 1980s, when the elder O’Rourke was a prominent judge (Whatever it was, Sheriff’s Department officers flushed it down a toilet.)

In 2010, the O’Rourke family furniture business pled guilty to federal money-laundering charges in a case involving $630,000. (Charlotte’s Furniture had dodged federal currency transaction reporting requirements.) And that happened in the border city of El Paso—so just whose money was being laundered? The not-so-inquiring minds of the MSM don’t want to know.

The most common knock on Ted Cruz: he is “unlikeable”—as some pro-Beto wag (and I can’t remember who) put it Cruz comes across as a reptile slathered in Vaseline (or words to that effect). My personal favorite: the comparison of Cruz to Al Lewis playing Grandpa Munster. “Unlikeable?” Check. Oily? Check. O’Rourke is “optimistic,” cool and once played in a punk rock band, while Grandpa Munster is well, uncool, his pedantic personality a bit of a downer.

Judging by an NBC/Marist poll, Cruz has a more negative image than O’Rourke, with 39% viewing him “unfavorably” (29% for O’Rourke—true, Cruz still leads on “favorability,” but a lot of voters seem unsure about O’Rourke.

But Cruz has plenty of ammunition to use against O’Rourke in his campaign to get out the GOP vote. Apart from his Kumbayah rhetoric, O’Rourke is running as an unapologetic Leftist—Cruz, warns he wants to make Texas more like California, “right down to tofu, silicon, and dyed hair”.

Check—though Cruz spends too much time on the “Tofu vs. BBQ” meme, as well as the usual GOP tax cut schtick, and not enough explaining just what becoming like California really means for Texas.

There is plenty of reason for Trump backers and immigration patriots in general to be wary of Cruz. True, he has publicly, at least, backed Trump’s calls for a border wall, sponsored “Kate’s law” and made plenty of the right noises about border security and immigration—illegal immigration, that is.

Butt the same time, Cruz has repeatedly said he views legal immigration positively (“I have many times summed up my views on immigration in four words: Legal, good. Illegal, bad”), and has supported increasing H1-B visas in the past—before changing his tune during the very heated 2016 Republican primary battle with Trump. That campaign forced Cruz to move further to the Right on immigration, including calling for an end to birthright citizenship, to avoid being outflanked by Trump.Cruz may not have (fully) seen the light, but he certainly did feel the heat.

“Red State” Texas is in trouble as the demographic Great Replacement proceeds. But the Democrats are likely a bit premature in counting on Beto O’Rourke leading a “Blue Wave” that will “flip” the state this time around, just as Hillary Clinton’s backers were premature in counting on the electoral eclipse of the hated “deplorables” in 2016 —a September Quinnipiac University poll of likely voters had Cruz nine points ahead of O’Rourke, 54% to 45%. It’s noteworthy that only 1% of respondents remained undecided.

The RealClearPolitics Poll Average has Cruz ahead by 4.5% as of October 4, but the website still ranks the race as a “tossup.”

And Cruz may ger a boost from the increasing lunacy of the totalitarian Left and the Kavanaugh confirmation hearings circus.

“Calgary Ted” has plenty of globalist skeletons in his closet, and was among the chorus of Beltway backstabbers who blamed Trump for Leftist violence. But the very reasons we may not fully trust him are also reasons to vote for him now—Cruz is an opportunist but he understands very well that backing the president is now in his interests (he has warned that O’Rourke supports impeaching Trump:), and that immigration patriotism is an electoral winner.

For his part, Trump has pledged to campaign for Cruz, declaring that he plans to fill “the biggest stadium in Texas we can find” to stump for the man he once called “Lyin’ Ted”.

That’s politics, folks. No revolution can succeed without co-opting part of the establishment elite. Cruz may not be BBQ to O’Rourke’s tofu, but in this case--showing my Souther roots here--potted meat will do.

Wayne Allensworth [email him] a corresponding editor of Chronicles Magazine, is the author of The Russian Question and a recently published novel, Field of Blood (Endeavour Media) which deals with the issues of Open Borders and globalization’s impact on the fictional town of Parmer, Texas.