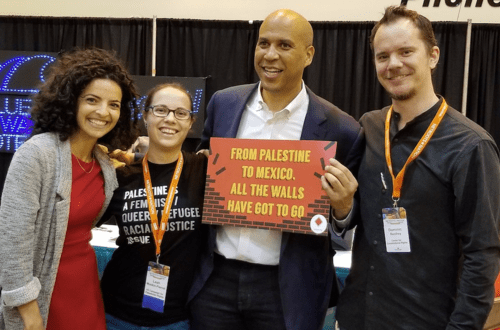 Cory Booker Apologizes for Holding Up Anti-Israeli Sign, Explains That He Thought It Was Merely an Anti-American Sign

From the Jewish Telegraph Agency:

Sen. Cory Booker says he had no idea sign he held is linked to pro-Palestinian movement

Sen. Cory Booker, seen as a likely contender for the 2020 Democratic presidential nomination, appears in a photo appearing to endorse a slogan of the pro-Palestinian movement.

A Booker spokesman told JTA the senator had no idea the sign had anything to do with Israel.

Booker, a New Jersey Democrat who is known for his closeness to the Jewish community, is seen posing while holding a sign reading “From Palestine to Mexico, all the walls have got to go” and depicting a crumbling brick wall. The slogan was coined by the U.S. Campaign for Palestinian Rights, which posted the photo Friday on Twitter.

A spokesman for Booker, Jeff Giertz, said Booker believed the sign referred only to Mexico.

“Just before delivering a speech in New Orleans, Senator Booker was approached by dozens of people for photos,” Giertz told JTA in an email.

“In one instance, amid the rush, he was posing for a photo and was passed a sign to hold – he didn’t have time to read the sign, and from his cursory glance he thought it was talking about Mexico and didn’t realize it had anything to do with Israel,” Giertz said. …

Israeli Prime Minister Benjamin Netanyahu stirred outrage from Democrats in 2017 when he favorably likened another Israeli wall – on the border with Egypt – to Trump’s proposal.