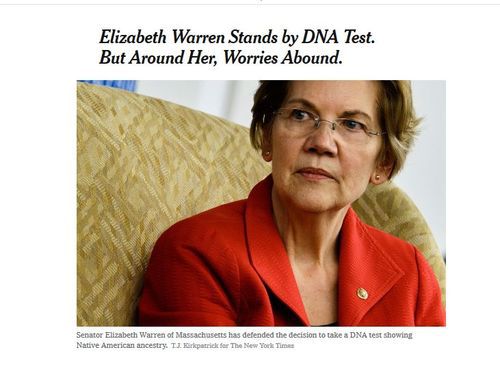 Senator Elizabeth Warren's DNA Test Is Back in the News

It’s always fun to milk another post out of Senator Warren’s DNA test. From the New York Times:

Elizabeth Warren Stands by DNA Test. But Around Her, Worries Abound.

WASHINGTON — The plan was straightforward: After years of being challenged by President Trump and others about a decades-old claim of Native American ancestry, Senator Elizabeth Warren of Massachusetts would take a DNA test to prove her stated family origins in the Cherokee and Delaware tribes.

But nearly two months after Ms. Warren released the test results and drew hostile reactions from prominent tribal leaders, the lingering cloud over her likely presidential campaign has only darkened. Conservatives have continued to ridicule her. More worrisome to supporters of Ms. Warren’s presidential ambitions, she has yet to allay criticism from grass-roots progressive groups, liberal political operatives and other potential 2020 allies who complain that she put too much emphasis on the controversial field of racial science — and, in doing so, played into Mr. Trump’s hands.

… The advisers say Ms. Warren will have to confront the issue again if she announces a presidential campaign, which is expected in the coming weeks, and several would like her to act soon. …

Ms. Warren’s allies also say she unintentionally made a bigger mistake in treading too far into the fraught area of racial science — a field that has, at times, been used to justify the subjugation of racial minorities and Native Americans.

Ms. Warren has also troubled advocates of racial equality and justice, who say her attempt to document ethnicity with a DNA test gave validity to the idea that race is determined by blood — a bedrock principle for white supremacists and others who believe in racial hierarchies. Native American critics, including Kim TallBear, a prominent scholar from the University of Alberta, said in October that Ms. Warren’s actions relied on “settler-colonial” definitions of who is an indigenous American and amounted to a haughty refusal to hear out her longstanding critics.

This line of criticism has particularly stung Ms. Warren, who has made a point to hold several private talks with Native leaders since taking the DNA test, emphasizing her respect for tribal sovereignty and making clear she does not claim tribal citizenship.

No casino check for you!

Three people close to senior members of Ms. Warren’s team, who were granted anonymity to speak freely on the issue, said they were “shocked” and “rattled” by the senator’s decision to take the DNA test, which they described as an unequivocal misstep that could have lasting consequences, even on 2020 staffing. One former adviser, who also asked not to be named, called it a “strategic failure” that was “depressing and unforgettable.”

… She received praise for lending her national platform to highlighting injustice against Native Americans recently and, in one high-profile incident, she impressed social justice activists when she refused to backtrack after calling the American criminal justice system “racist” from “front to back.”

Get ready for President Warren to preside over another rise in homicides.

In interviews, several left-leaning groups wondered if Ms. Warren’s decision to take the DNA test was indicative of a larger problem for several prospective presidential candidates: that their inner circles of advisers don’t reflect the racial diversity of the Democratic electorate.

As always, the solution is: Hire me and then I’ll hire my friends for you:

“Race is a true third rail in American politics, and you can make a lot of mistakes when we don’t have a diverse set of folks who are in the room and empowered to make decisions,” said Eric Lundy [Right]  program director of Inclusv, a group that pushes for more diversity in political campaign staffs.

… Ian Haney López, the law and racial justice professor at the University of California, Berkeley, said Ms. Warren made a “naïve” error by not seeming to grasp the attack strategy of conservatives.

Just as Mr. Trump used his so-called “birther” campaign to depict former President Barack Obama as a foreign-born immigrant, Mr. Trump was not seeking to make a factual claim against Ms. Warren but to brand her as an outsider, Mr. López said.

Uh, no. You’re only off by 180 degrees, Senor Haney. Trump was making fun of Senator Suzie Creamcheese claiming to be Diverse for career advancement.

The point this article leaves out is that Democrats don’t benefit from talking about Affirmative Action. They especially don’t benefit from questions being raised about why some people benefit from racial preferences and other people don’t. That’s why you almost never read about affirmative action in the MSM unless it’s in front of the Supreme Court: it’s not good for the Democrats. Senator Warren was stupid to bring it up.