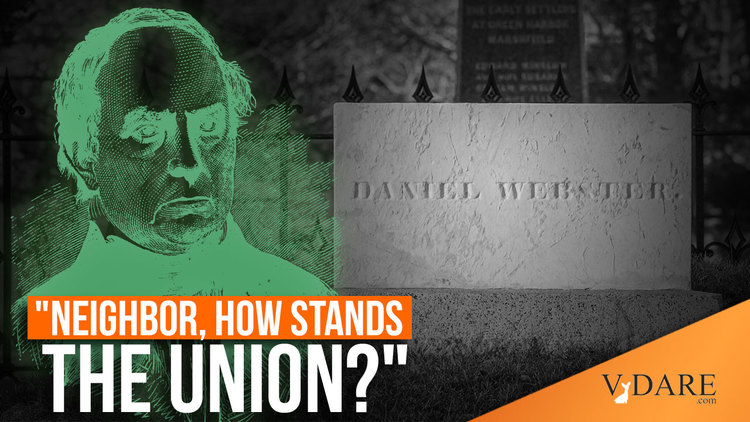 In Stephen Vincent Benet's "The Devil and Daniel Webster," the tale is told that if you approached Webster's grave and called out his name, a voice would boom in reply, "Neighbor, how stands the Union?"

"Then you better answer the Union stands as she stood, rock-bottomed and copper-sheathed, one and indivisible, or he's liable to rear right out of the ground."

Today, it would be untruthful to answer to the soul of Webster that our Union is "rock-bottomed and copper-sheathed, one and indivisible."

For the divisions among us replicate those Webster witnessed in his last years before the War Between the States.

A Gallup survey reports the lowest figure ever recorded, 38%, for that share of our population that proclaims itself to be "extremely proud" to be Americans. Another 27% say they are "very proud."

But the share of our people who say they are only "moderately proud" or a "little proud" or "not at all proud" to be Americans adds up to a third of the nation.

In the past, those "extremely" or "very proud" to be Americans used to average 80% of the country. Now it is down to 65%.

To love one's country, Edmund Burke said, one's country ought to be lovely. It would appear that 1 in 3 Americans, more than 100 million of us, no longer see our country as truly lovely.

While patriotism and pride in U.S. citizenship and in being part of this national community are eroding, other problems are being revealed by public surveys.

In a new AP-NORC poll, 85% of all Americans believe the country is headed in the wrong direction, with 92% of Republicans believing this to be true and 78% of Democrats agreeing.

On July 5, a Monmouth poll reported that President Joe Biden's approval rating had sunk to 36%, with 59% disapproving of his presidency. 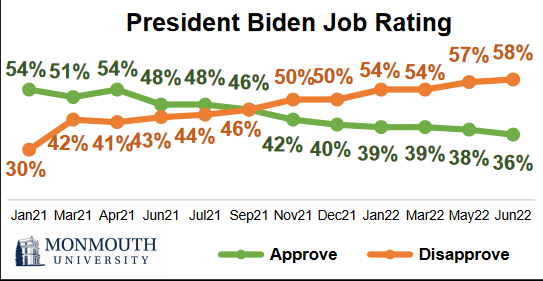 As for our Democratic-led Congress, 15% of all Americans approved of its performance, with 85% disapproving.

Another Gallup survey from July 5 reported that this last year has seen a fall in public confidence in every one of 16 major U.S. institutions.

The institutions in which Americans now place the least confidence are the presidency, newspapers, the criminal justice system, big business, television news and, at rock bottom, Congress. Only 7% of Americans have great confidence or quite a bit of confidence in Capitol Hill.

The institutions that enjoy the greatest measures of confidence—though here, too, the levels are receding like Lake Mead—are small business, the military, the police, the medical system and religious institutions.

That small business is the most trusted of American institutions suggests that Biden's attack on the alleged greed of gas station owners may not be politically wise.

American institutions that tend to be conservative—small business, the military, cops—are where the American people repose the greatest confidence. Journalistic institutions—newspapers and TV news—both largely liberal, appear to be ones in which the nation reposes the lowest levels of confidence and the greatest deposits of distrust.

Why are Americans so down on their country and disapproving of its direction, and of their president who is leading them?

Surely, the pandemic, which has taken a million lives in 30 months and infects 10 times as many of us today as it did a year ago, with the death toll roughly the same now as then, is a primary cause.

The crisis at the Mexican border, where a quarter of a million illegal migrants enter our country, uninvited, every month, with cartel mules ferrying the fentanyl and other narcotics that kill tens of thousands of young Americans every year is surely another.

Then there is the worst inflation in 40 years and the record rise in the price of food and fuel for America's families.

Also, since the first of the year, there have been an average of 10 "mass shootings" a week, where a criminal gunman wounds or kills four or more victims. Major atrocities like Buffalo, New York; Uvalde, Texas; and Highland Park, Illinois, dominate the news for days.

And each weekend seems to bring a new casualty report of the dead and wounded from Chicago's streets that reminds us of the early days of Vietnam.

Then there is the poisonous character of American politics.

In the 2016 campaign, Hillary Clinton famously described half of the supporters of Donald Trump as a "basket of deplorables."

Following the Supreme Court decision overturning Roe v. Wade and sending the issue of abortion back to the states for decision, the term "fascist" has been applied by the Left to its right-to-life opponents.

Which makes one wonder.

If Republicans capture two or three dozen House seats in this fall's midterm elections, would that constitute a triumph of American fascism?

And how does the Left argue that we should come together and stand on "common ground" with folks such as those Clinton describes?