America’s Largest Reservoir Is at Its Lowest Level Ever

Here in northern California, local TV news has a lot of coverage about the water shortage, which I dont remember happening during previous droughts. So the situation is bad, with millions more people using water when there is less of it.

True, most of the water supply goes to agriculture, not home faucets, but the farms are producing food for a rapidly increasing population, fueled by immigration. California farmers have been drilling ever deeper wells for their crops, to the point where the land is subsiding up to a foot in some areas.

The billionaires and other elites who want endless population growth to feed economic expansion dont care that that this level of growth is unsustainable. The western half of the country is at that point now, but nobody talks about it, particularly environmentalists who refuse to discuss the stress on natural systems of unsustainable population growth.

Lake Mead, Americas largest reservoir, is at its lowest level since Hoover Dam was built in the 1930s, as is painfully obvious. 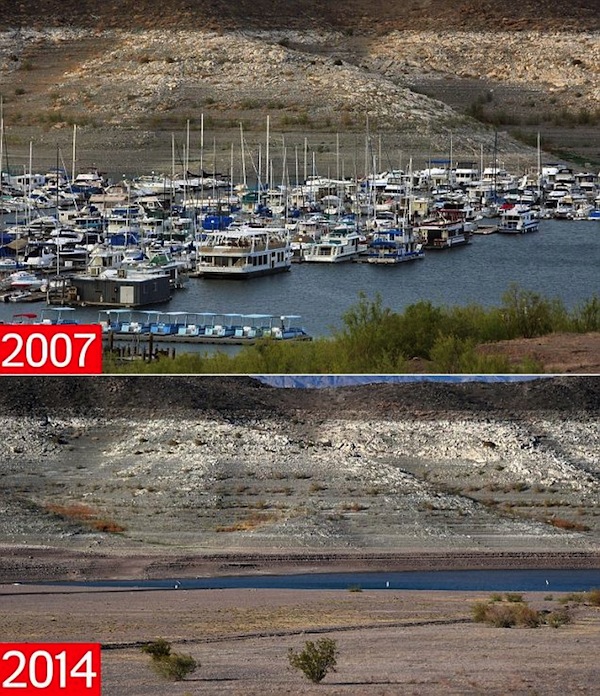 The Daily Mail article, linked below, has lots of photos showing how little water there is in and around Lake Mead.

Officials from nearby Las Vegas are pushing conservation, but are also drilling a new pipeline to keep drawing water from the lake.

Hundreds of miles away, farmers who receive water from the lake behind Hoover Dam are preparing for the worst.

The receding shoreline at one of the main reservoirs in the vast Colorado River water system is raising concerns about the future of a network serving a perennially parched region home to 40 million people and 4 million acres of farmland.

Marina operators, water managers and farmers who for decades have chased every drop of water across the booming Southwest and part of Mexico are closely tracking the reservoir water level already at its lowest point since it was first filled in the 1930s.

We just hope for snow and rain up in Colorado, so itll come our way, said marina operator Steve Biggs, referring to precipitation in the Rockies that flows down the Colorado River to help fill the reservoir separating Nevada and Arizona.

By 2016, continued drought could trigger cuts in water deliveries to both states. While water authorities say theyve been saving water for potential dry days, the prospect of the first cuts is already prompting action.

Ive downsized in the last couple of years, probably a good thing the way this water shortage is going, said farmer Dennis Bagnall, who has planted just 225 of the 1,500 acres that are typically green this time of year on his farm south of Phoenix.

We can certainly hope for better conditions than weve experienced in recent times, but we have to actively and continue to plan for the worst case, said Michael J. Lacey, director of the Arizona Department of Water Resources.

This week, an update from the federal Bureau of Reclamation, the keeper of the Colorado River networks dams and reservoirs, will help set the course for water deliveries for the next two years. Administrators say theyre confident they can meet current commitments next year.

Federal officials and water administrators in metro areas such as Las Vegas and Phoenix say theyre committed to finding new ways to make every drop of river water count — from cloud seeding to pipelines to new reservoirs to desalination plants.

They point to agreements to leave surpluses unused in wet years, share pain in dry years and buy water designated for farms for city use.

But theyre all watching Lake Mead, the biggest in a Colorado River basin that supplies water to California, Arizona, Colorado, New Mexico, Nevada, Utah, Wyoming and part of Mexico. The states get annual allotments dating to the Colorado River Compact of 1922.

Over the years, the amount hasnt kept pace with a post-World War II development boom in the Southwest, and pressure has increased with drought gripping the region for almost 15 years.

The effect of increased demand and diminished supply is visible on Lake Meads canyon walls. A white mineral band often compared with a bathtub ring marks the depleted water level.

A projected level of 1,075 feet in January 2016 would trigger cuts in water deliveries to Arizona and Nevada.

At 1,000 feet, drinking water intakes would go dry to Las Vegas, a city of 2 million residents and a destination for 40 million tourists per year that is almost completely dependent on the reservoir.

That has the Southern Nevada Water Authority spending more than $800 million to build a 20-foot-diameter pipe so it can keep getting water.

But severely restricting water use for swimming pools or lawns in a city like Phoenix wouldnt make much difference, said Kathryn Sorensen, the citys Water Services Department director, because conservation efforts need to be applied across the western U.S.

The solution cant come just from municipal conservation; there isnt enough water there, she said.

If cuts do come, theyll test the agreements forged in recent years between big, growing cities and farmers.

In California, home to 38 million residents, farmers in the sparsely populated Imperial Valley in southeast California have senior water rights ensuring that they get water regardless of the condition.

Kevin Kelley, general manager of the Imperial Irrigation District, defends his agencys position at the head of the line and dismisses the idea that water should go to those who can pay the most or make the most compelling economic argument.

Imperial Valley farmers grow some 200 crops, Kelley said, from alfalfa to cotton and celery to zucchini. There has to be a place in a diverse economy and a diverse Southwest for a place like this that grows food and fiber year-round, he said.

Bagnall, who owns Morningstar Farms in Coolidge, Arizona, worries about the future of farming in the region. Tighter supplies mean there will be less farming and fewer dollars going to agricultural services like fertilizer suppliers.

Eventually, he said, the prices are going to hit the consumer. Sooner or later, its got to go up. So its just a domino effect.