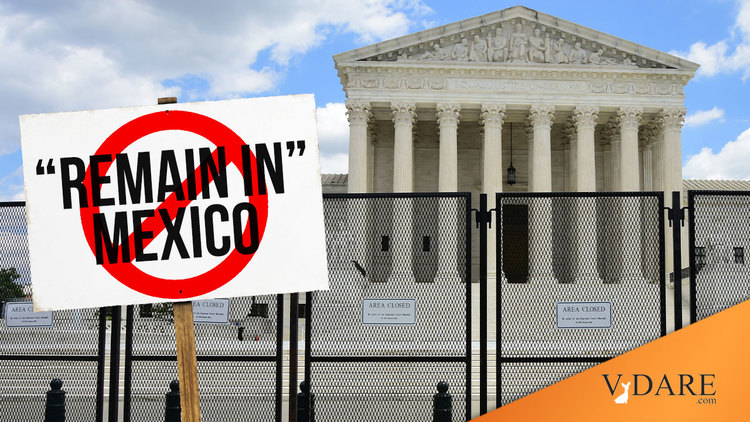 The Wind From The South: Latin American Leftism May Trigger Massive Migrant Invasion

Earlier, by Steve Sailer: The Wind from the South—Anti-White Populism

The timing could not have been worse for the supposedly “right-wing” Supreme Court to end President Donald Trump’s “Remain in Mexico” policy. Surging Leftism in Latin America is about to spawn the Mother of All “refugee” crises [Supreme Court: Biden Can End Trump-Era ‘Remain In Mexico’ Immigration Policy, AP, June 30, 2022]. Even after the horrifying discovery of dozens of dead migrants, another migrant caravan of about 3,000 people is on its way to invade our country [Mexico Gives Travel Permits To 3,000 Caravan Migrants Headed To U.S., by Ildefonso Ortiz, Brandon Darby, and Luisana Moreno, Breitbart, June 29, 2022]. Impending Leftist victories in Chile, Colombia, and Argentina may spur a continental economic collapse driving migrants north [Latin America’s new ‘pink tide’ gains pace as Colombia shifts left; Brazil up next, by Isabel Woodford, Carlos Vargas, and Gabriel Araujo, Reuters, June 23, 2022]. America needs to literally wall itself off from it as quickly as possible.

It's difficult to overemphasize the magnitude of the political shift taking place in recent weeks:

In Chile, leftist Gabriel Boric triumphed in December and vowed to “bury” the remnants of General Augusto Pinochet’s economic model [Leftist millennial wins election as Chile’s next president, Associated Press, December 19, 2021]. In September, there will be a referendum for a new constitution that the UN gleefully reports will

…focus on specific human rights, prohibitions and vulnerable groups, from access to justice and the right to reparation to the human rights of women, Afro-descendants and LGBTI people

In other words, Chile will become just another Third World country. Not surprisingly, the new president stands at just 34% popularity as the economy struggles, with his communist spokesperson shrugging it off as the administration learning “big lessons, self-criticism, and learning to work as a team” [Chile’s new leftist president gets reality check as support wanes, by Alexander Villegas, Reuters, June 29, 2022]. But what’s the alternative? Unless Pinochet rises from the grave, this is Chile’s fate.

Argentina was once a European-derived country, with higher per capita income than Italy, Spain, and Norway in 1913 [Argentina: A Mirror of Your Future, by Gustavo Semeria, American Renaissance, April 14, 2022]. However, following decades of non-white immigration and catastrophic economic policies, Argentina is almost a permanent economic basket case, with skyrocketing inflation and an inability to pay debts [Default Jitters Mount in Argentina as Local Yields Top 70%, by Scott Squires, Bloomberg, June 27, 2022]. According to Bloomberg, “Argentina hasn’t had single-digit inflation in at least a decade” [With 58% Inflation, Nobody in Argentina Knows the Price of Anything, by Patrick Gillespie, Bloomberg, May 31, 2022]. Currently, Argentina is mired in protests over soaring fuel costs [In Argentina, farm groups call for trade halt to protest government, by Eliana Raszewski, Reuters, June 29, 2022].

Similar protests are underway in Ecuador, where there is still a somewhat conservative government. However, here, they have taken on a racial dimension. “Indigenous” leaders tried to storm the National Assembly in something that would be called a threat to democracy if done by right-wingers [Ecuador’s New Left Shows Its True Colors, by Gabriela Calderon de Burgos and Daniel Raisbeck, CATO at Liberty, June 30, 2022]. Protests have crippled oil production, which will make it harder for the government to reduce high fuel costs, the ostensible cause of the riots [Ecuador president announces fuel price cut amid days of protests, Al Jazeera, June 27, 2022].

In Nicaragua, the positively ancient regime of Daniel Ortega, a notorious Soviet asset during the Cold War, remains in power. Ortega’s actions wouldn’t surprise conservatives, as the government is moving to repress dissident organizations, including the Catholic Church. (Even the lefty Jesuits are bothered by this.) [In Nicaragua, the Ortega regime steps up efforts to silence civil society–especially the Catholic Church, by Dany Diaz Mejia, America, June 27, 2022]. However, there is no alternative. “What is too often overlooked… is that for many Nicaraguans, the FSLN [Ortega’s Sandinista National Liberation Front] remains the only political party that represents the interests of the poor” [Nicaragua: former revolutionary Daniel Ortega now resembles the dictator he helped overthrow, by Eline van Ommen, The Conversation, November 5, 2021].

And the poor, as Christ Himself reminded us, will always be with us—especially in Latin America.

Honduras is another country with a Leftist government, ruled by socialist Xiomara Castro. It too is attempting to freeze fuel costs [Honduras enacts months-long gasoline price freeze in inflation fight, Reuters, June 24, 2022]. This is not doing much for the economy. Americas Quarterly published a cheerleading article about Castro and her supposed fight against corruption, but noted that she’s “been unable to reduce the country’s intense street crime and gang violence that is a primary driver of migration to the U.S.” [Slow but Steady for Honduras’ New President, by Joan Humberto Suazo, June 6, 2022]. Not surprisingly, two Hondurans were among those found dead in the back of the Texas trailer. NBC eulogized their quest for a “better life” [‘I hope you triumph,’ Honduran mom told her two sons. Then she lost them in tractor-trailer tragedy, by Suzanne Gamboa, June 29, 2022].

Crime in central America is habitually cited by Leftist media as the reason why migrants come to our country, even though probably all they are doing is spreading the problem here [Gangsters killed Maria’s sister in Honduras. A note on the door told her she was next…, by Sarah Johnson, The Guardian, June 21, 2022].

In El Salvador,  President Nayib Bukele is responding, jailing as much as two percent of the population in a war on crime [El Salvador to escalate its security crackdown after the death of police officers, by Tom Phillips, The Guardian, June 29, 2022]. Of course, this is catnip to NGOs and journalists who are now circling the country and accusing it of human rights violations.

Don’t be too surprised if we see a “color revolution” in El Salvador soon.

Tucker Carlson has been broadcasting from Brazil, much to the outrage of other journalists [Tucker Carlson previews interview with Brazilian far-right leader Bolsonaro months after fawning after Hungary’s authoritarian leader, by Sinead Baker, Business Insider, June 30, 2022]. Carlson said Bolsonaro and Brazil are the “only large economy in this hemisphere that remains pro-American.” But that probably won’t remain true for long—former president Luiz Inacio Lula da Silva, best known as Lula, is leading by almost 20 points in the polls [Bolsonaro sits down with Fox News star Tucker Carlson, by Cede Silva, Brazilian Report, June 29, 2022].

This isn’t the first time we’ve seen a Leftist wave with racial overtones in Latin America. Steve Sailer highlighted the same thing happening in 2005. The difference now is that this is occurring at a time when the United States itself is questioning its own legitimacy.

It’s one thing when Evo Morales, Bolivia’s first indigenous President,  says European settlement of the Americas was a bad thing, but quite another when Americans themselves are saying this.

What’s clear is that the European veneer of civilization imposed on Latin America is being washed away by the flood of changing demographics and anti-white racial nationalism.

“The new Latin American indigenist movement rejects all things Western in the name of preserving the native essences and identities allegedly destroyed by colonization in the first instance and subsequently by the Creole Republics,” wrote Emilio Lamo de Espinosa in “Is Latin America part of the West?” back on December 4 2017 [Real Instituto].

Now, the question is whether America is part of the West.

If America is to survive in any meaningful or recognizable form, it must be defined and defended explicitly as an outgrowth of European civilization in the New World. Furthermore, strict immigration control is necessary to make sure America doesn’t suffer the fate of Argentina and become just another Third World country in permanent crisis.

There will never come a moment when the supposed “root causes” of migration, including crime, corruption, and inequality, will be removed from Latin America. That is because they are inherent to the half-civilized culture that has been created south of the Rio Grande, and now, sadly, imported to many parts of the United States.

Yet there’s more that America can do. I’ve often joked that the future of the West may depend on whether Hispanic immigrants see themselves as the heirs of the conquistadors or those they conquered. Removing incentives for the latter, such as Affirmative Action, would facilitate assimilating Hispanics into a pro-American, patriotic culture.

Latin America itself, barring strong leaders that could impose order on the growing chaos, is already falling into the Third World abyss.

It’s our job to make sure the north doesn’t follow.