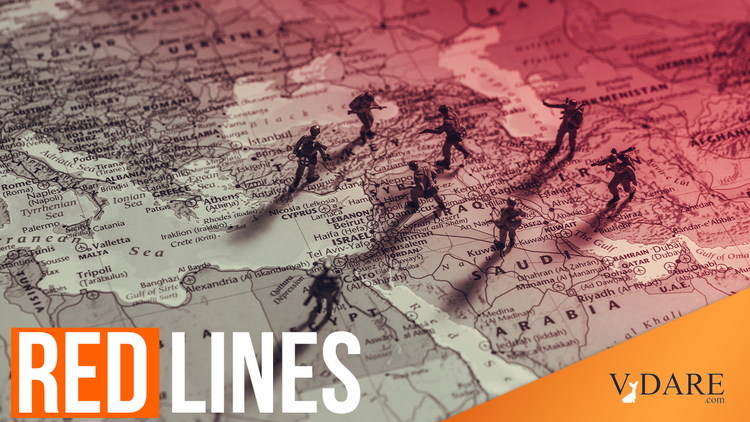 In early August 1990, Iraqi dictator Saddam Hussein invaded and occupied Kuwait and declared it to be his nation's lost 19th province.

Translation: Get out of Kuwait, Saddam, or we will come over there and throw you out.

Six months later, after a five-week air assault on Iraq, a U.S.-led army of 500,000, in a 100-hour ground war, sent Saddam's legions back up the road to Basra and Baghdad.

President Bush was a serious man.

A decade later, Barack Obama warned Syria's Bashar Assad that if he used chemical or biological weapons in his civil war, this would cross his "red line" and Obama would respond.

Thus, when chemical weapons were used, allegedly by the regime, Obama prepared to make good on his warning.

Unfortunately for Obama, Americans arose in protest against his taking us into Syria's civil war and Congress balked at authorizing an attack, though Secretary of State John Kerry pleaded and promised that the U.S. strike would be "unbelievably small."

When America did nothing after Obama's red line was crossed, U.S. credibility suffered.

Of late, Joe Biden and Donald Trump's foreign policy team have both been drawing red lines and warning Iran and China not to cross them or they'd face U.S. military action, even at risk of a wider war.

Trump has reportedly put out word that any killing of an American anywhere in the Middle East, traceable to Iran or its proxies, will result in U.S. action against Iran itself.

A general of the Iranian Republican Guard has reportedly warned Iran's militia allies in Syria, Lebanon and Iraq to hold off any attack on Americans so as not to give Trump an excuse to launch a war.

Other red lines have lately been drawn.

In a Nov. 12 phone call with Prime Minister Yoshihide Suga, Joe Biden apparently agreed that the U.S.-Japan security treaty of 1960 covers the Senkaku Islands controlled by Japan but claimed by China. Almost every day of 2020, China has sent ships into the waters around the Senkakus.

Said Suga, "President-elect Biden gave me a commitment that Article 5 of the US-Japan security treaty applies to the Senkaku Islands."

A year ago, a Chinese ship smashed up a wooden trawler with two dozen Filipino fishermen aboard near Reed Bank in the South China Sea. Fortunately, the Filipinos were rescued by a Vietnamese fishing boat. Reed Bank is also claimed by China.

On a trip to Asia, O'Brien told Philippines officials that the U.S. does not recognize the Chinese claim, and they should go ahead and exploit the resources around Reed Bank. And if Philippine vessels come under attack, our mutual security treaty dating to the 1950s will be invoked and America will come to the defense of the Philippines.

What this sounds like, indeed, appears to be to Beijing, is a U.S. commitment to fight to defend Manila's claims to shoals, reefs and rocks in the South China Sea. Earlier this fall, Manila announced plans to restart oil and gas exploration around Reed Bank.

O'Brien said bluntly of the territories around Reed Bank:

O'Brien added: "Any armed attack on Philippine forces aircraft or public vessels in the South China Sea will trigger our mutual defense obligations."

Beijing is visibly angered by the U.S. assertions that they have no legitimate claim to the Senkakus in the East China Sea or to the Manila-claimed islets, reefs and rocks in the South China Sea, and that the U.S. military will take the side of Tokyo and Manila in a collision with China.

Red lines are, at root, war guarantees. And, often, the result of issuing such war guarantees is that they are called in and lead to wars that are sometimes fatal to the great powers that issue them.

In 1914, Kaiser Wilhelm issued his famous "blank check" to his Austrian allies to punish the Serbs for complicity in the assassination of their archduke. Austria's attack on Serbia led to World War I, and the end of the Kaiser's Hohenzollern dynasty.

In late March of 1938, Neville Chamberlain gave an unsolicited war guarantee to Poland, to come to its defense if the Polish colonels refused to negotiate with Berlin over the German port of Danzig.

How did that one work out for the Brits?